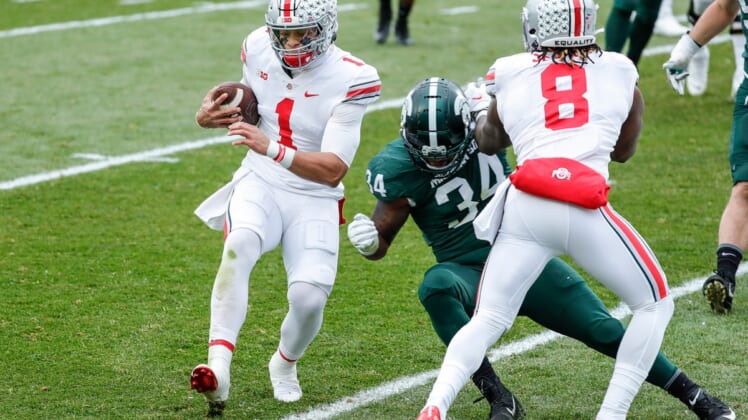 Ohio State quarterback Justin Fields (1) runs against Michigan State linebacker Antjuan Simmons (34) during the first half at the Spartan Stadium in East Lansing on Saturday, Dec. 5, 2020.

It would be an understatement to say that the Las Vegas Raiders quarterback situation remains up in the air. Jon Gruden and Co. are in playoff contention. Statistically, Derek Carr has played well this season.

However, there’s also a pretty big backstory here. That includes a questionable relationship between Carr and Gruden as well as the Raiders looking at their quarterback options last offseason.

Here, we take a look at five Las Vegas Raiders quarterback options for the 2021 season.

Both Derek Carr and Marcus Mariota remain under contract for the 2021 season. Their combined cap hits will come in at $32.2 million. While that seems to be a high figure, it’s important to note that Las Vegas would be paying out the eighth-highest figure to its quarterback room as of right now. It’s not as alarming as one might think when reading that initial number.

As we saw with the Las Vegas Raiders quarterback situation during Week 15 against the Los Angeles Chargers, there might not be a dramatic difference between Carr and Mariota. The latter dealt with injuries during his initial training camp with the Raiders. They obviously didn’t play any preseason games, either. There’s a chance Jon Gruden retains both as a way for them to compete for a starting job in 2021.

On the other hand, Las Vegas can opt to release Mariota after the 2020 season and save his entire $10.1 million salary against the 2021 NFL salary cap. Given the financial complications when it comes to COVID-19, this seems to be a real possibility. The Raiders would then rely on Carr to be at least a stopgap option in 2021 while potentially grooming a draft pick to replace him.

This would not necessarily come via a high-round draft pick (more on that later). Rather general manager Mike Mayock might look to find a diamond in the rough to be the Las Vegas Raiders quarterback of the future. The 2021 NFL Draft is insanely deep at quarterback. It is a good time to pluck a signal caller on Day 2 or Day 3. Purely hypothetical, but Sam Ehlinger (Texas) or Jamie Newman (Georgia) could make sense.

There’s a darn good chance multiple proven starting quarterbacks will be on the NFL trade market this coming offseason. Detroit Lions quarterback Matthew Stafford wants to win now. It’s not going to happen with that team in full-scale rebuild mode. There’s a chance the Atlanta Falcons move on from Matt Ryan. Heck, recently-benched Philadelphia Eagles quarterback Carson Wentz could be an option.

Either way we spin it, Jon Gruden will have some nice options on the trade block to find the next Las Vegas Raiders quarterback should they opt to move on from Derek Carr. Realistically, Ryan and Stafford would be seen as upgrades. Wentz is an open book, but he could entice a head coach in Gruden who loves those prototypical drop-back quarterbacks. It’s in this that the Raiders could also take a chance on Sam Darnold.

Assuming for a second the Raiders have no interest in either Cam Newton or Jameis Winston as a starter, the options are limited in this regard. Philip Rivers will more than likely re-sign with the Indianapolis Colts. Dak Prescott might not even hit the open market.

Despite his serious ankle injury, the Cowboys are looking at potentially placing the franchise tag on Prescott. However, there’s a scenario here that includes Las Vegas offering Prescott the $40-plus million he’s seeking annually while pulling off a trade with the Cowboys. If none of these four veterans are options to be the new Las Vegas Raiders quarterback, perhaps they take a chance on someone like Mitchell Trubisky or Andy Dalton. Again, not great options.

Even if the Raiders were to lose out this season, there’s no reason to believe that they’ll be in a position to add one of the top signal callers in that of Trevor Lawrence, Justin Fields or Zach Wilson. The best these Raiders could hope for in Round 1 would be either Kyle Trask (Florida) or Trey Lance (North Dakota State).

This doesn’t take into account the possibility that Gruden and Co. look to pull off a trade up the draft board for either Fields or Wilson. It might take a lot, but finding that next Las Vegas Raiders quarterback should be of utmost important to the team’s brass should they come to the conclusion Derek Carr is not the answer.