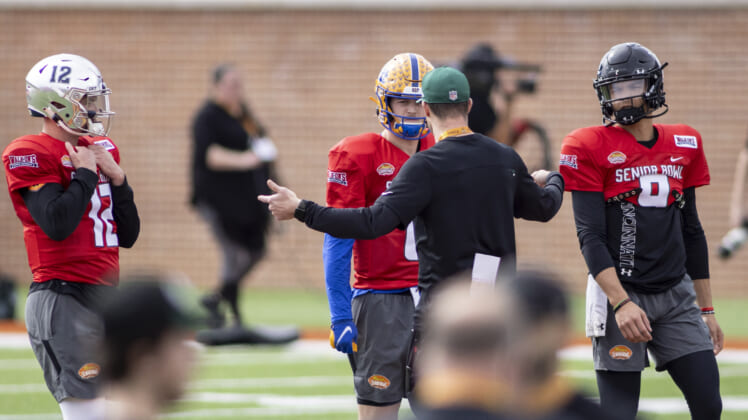 Analyzing the incoming draft class each year can be a fun practice. Most would agree, the draft-eligible athletes have displayed a wide array of skills, but there’s no generational talent among the bunch, or even a consensus top player. Because of this, the 2022 NFL Draft quarterback prospect rankings will be all over the place, with most analysts not being able to agree on who should be top-ranked, how many first-round prospects there would be, or who can help a team immediately.

So we thought it would be fun to add to the confusion by coming up with our own 2022 NFL Draft quarterback prospect rankings. There are several qualified candidates, but we’re not going to evaluate them all, preferring to focus on the top-six quarterbacks expected to be selected in April’s draft.

No, that’s not a typo, Carson Strong really finished his final college season with a negative amount of rushing yards. I’m sure if we asked Strong, he wouldn’t care about that aspect, he is what he is, but he does possess some sneaky athleticism that might surprise some teams.

The California native has one of the biggest arms in this QB class and can routinely connect on bombs downfield. During the Senior Bowl, Strong impressed with his ability to make shorter and intermediate passes that still cut through the high winds players were dealing with.

A chronic knee injury that Strong dealt with at Nevada might also knock him down a bit on some draft boards.

Whoever picks Strong is getting one of the best pocket passers in college football. He has the potential to improve with some better coaching. A three-star prospect, Nevada was his only FBS offer, yet Strong was among the most productive signal-callers in the nation.

What are the best NFL landing spots for Carson Strong?

Rewind to a year or two ago and Sam Howell would have ranked atop the 2022 NFL Draft quarterback prospect rankings. But he didn’t continue making great strides shown early in his career. One benefit was Howell showing off more of his athletic traits that he’ll need to continue using in the pros.

His final year at North Carolina, Howell dealt with losing many of his top contributors from the year before, and it showed. Had a true opportunity to establish himself as the top overall pick, but squandered it with an average season, tanking his draft stock.

Teams will take a chance on Howell, with the hope they can revert him back on the skyward trend his younger self displayed. Howell has a chance to be a starter in the NFL with the potential for much more.

What are the best NFL landing spots for Sam Howell? 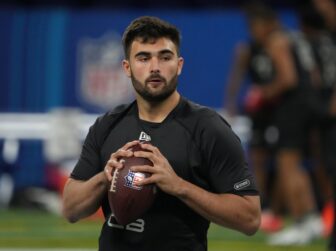 4. Desmond Ridder, Cincinnati – Drafted by Atlanta Falcons at No. 74

Desmond Ridder is coming off a phenomenal season in which his Cincinnati Bearcats were routinely among the top-five teams in the nation. He’s an experienced winner, but he’s not the main reason for their success. It’s a bit odd that Ridder isn’t compared more closely to the players at the top of the 2022 NFL Draft quarterback prospect rankings, but he remains incredibly gifted.

He has the ideal size for a QB, plus traits that will make NFL evaluators drool thanks to his plus arm strength and effective athleticism, but he’s no perfect prospect. Some plays he looks like a first-round pick, and other times he can’t hit a short throw. Whoever drafts him will need to work on his anticipation skills at the next level among other things.

What are the best NFL landing spots for Desmond Ridder?

3. Matt Corral, Ole Miss – Drafted by Carolina Panthers at No. 94

Matt Corral is an interesting study. He entered the season as the likely No. 1 overall pick, yet here we are and no one really mentions him in that class anymore. Although some still place Corral No. 1 in their 2022 NFL Draft quarterback prospect rankings.

Not afraid to make mistakes, or move past them, Corral has two seasons of starting experience in the SEC, where his teams were frequently among the top-ranked in the nation. There’s no questioning his leadership, or his fit with the NFL. Everyone seems to be looking for a QB who can make all the throws while displaying enough mobility to flee the scene when the bullets fly, Corral can do all that in his sleep.

Having learned from Lane Kiffin at Ole Miss, Corral might be more pro-ready than some of his peers and has potential to make an immediate impact, if he’s thrust into action as a rookie.

What are the best NFL landing spots for Matt Corral?

2. Malik Willis, Liberty – Drafted by Tennessee Titans at No. 86

Watching the Malik Willis highlight reel, it’s not hard to see the zip behind his passes. Willis easily has one of the strongest arms in the 2022 QB draft class. He’s certainly the most athletic of those found in these 2022 NFL Draft quarterback prospect rankings. Though he spent two seasons as a starter for Liberty, Willis was once an Auburn Tiger, but only attempted 14 passes before transferring out to begin his junior year elsewhere.

Simply put, Willis is the biggest boom-or-bust prospect in the 2022 draft class.

With the potential to be the best quarterback from the incoming group, Willis also has a low floor. Perhaps held back by a less than stellar supporting cast at Liberty, there’s some question as to why Willis didn’t pop off the tape more often than he did. A popular topic at the Senior Bowl, Willis likely helped his draft stock with a strong week of practice and flashed some skills when the Americans took on the Nationals, but still, he didn’t look overtly more impressive than Kenny Pickett.

Willis faces questions about his size, level of competition, accuracy, and more. But if he can rise above these doubts, he could easily be the next franchise quarterback everyone desires. The one with the cannon for an arm, lightning-quick explosiveness, and an ability to turn broken plays into the play of the week.

What are the best NFL landing spots for Malik Willis?

Related: Where will Liberty’s Malik Willis land in the 2022 NFL Draft?

1. Kenny Pickett, Pittsburgh – Drafted by Pittsburgh Steelers at No. 20

There are several reasons why Kenny Pickett lands at No. 1 in our 2022 NFL Draft quarterback prospect rankings, but the biggest factor was the tape from his final season. Though he didn’t beat out Bryce Young or CJ Stroud for the Heisman Trophy, Pickett was able to come in third place after ranking second in the nation in passing yards and touchdowns.

A highly productive 2021 season catapulted Pickett to the top of the class, despite having to claw his way there. Before the year began, most would have expected Matt Corral or Sam Howell to become the No. 1 overall pick in the 2022 NFL Draft. While Pickett is a long shot to continue moving past other prospects to the top spot, he has a strong chance to be the first quarterback selected in April.

Some might be hesitant to buy into Pickett’s success in his fifth college season. Sure, he had a great year, but why did it take until he was 23 to burst onto the scene? Since he was a bit slower to emerge, some are questioning Pickett’s ceiling. Is he already close to his peak? Have we already seen his best performance?

Conversely, some view Pickett’s enormous one-year growth to be a sign of what’s to come. If Pickett can improve so much from one year to the next, who’s to say he can’t continue getting better as he gains confidence and chemistry?

These are just a few of the questions NFL evaluators will attempt to answer in draft rooms around the league leading up to selection day.

What are the best NFL landing spots for Kenny Pickett?