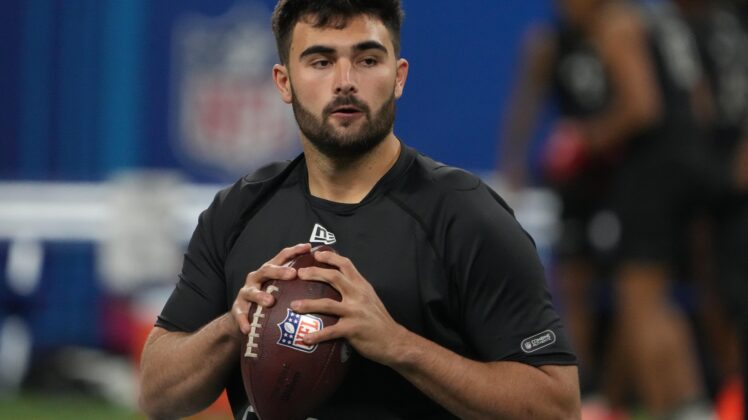 On the first night of the 2022 NFL Draft, the New York Giants put out word that they weren’t picking up the fifth-year option on Daniel Jones, which essentially sends him into the final year of his rookie contract. This means, come 2023, the Giants won’t have a starting quarterback on the roster. Unless, there’s a prospect they still have their eyes on during Day Two, which seems to be the case, based on their intrigue with Sam Howell.

SNY’s Ralph Vacchiano believes the Giants are high on the North Carolina product, and could be aiming to select him in the third round of tonight’s draft event.

Now that there’s a new general manager in town, with Joe Schoen making the calls, the Giants likely want to bring their own “guy” in, finding a QB who could be the future face of the franchise.

That didn’t happen in free agency, when players such as Russell Wilson and Deshaun Watson were on the move, instead, they preferred to hitch their cart to Jones, hoping he can improve under Brian Daboll, just as Josh Allen did in Buffalo after a rough rookie season.

That hope still remains, but it’s never a bad idea to bring in another young QB with potential. Worst case scenario, it’s just another draft pick that didn’t turn out. Doing so in the second or third round, it’s not as big of a loss as say doing so with the sixth overall pick, as they may have done under Dave Gettleman, selecting Danny Dimes in 2019.

Can Howell be that guy? Who knows, but it’s better than heading into another year with Jones as the top option, with Tyrod Taylor waiting in the wings. Howell may not be expected to do much as a rookie with two others ahead of him on the depth chart, but it’s better than having zero quarterbacks heading into the draft once again next season, creating more intrigue, making them less predictable by the time they’re on the clock.