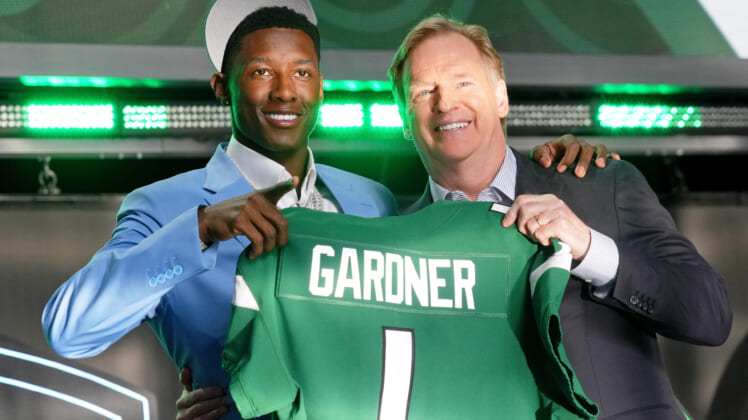 The New York Jets had two selections within the top-10 of the 2022 NFL Draft. Rumors leading up to the annual event indicated that the Jets were looking to pull off a blockbuster trade for disgruntled San Francisco 49ers wide receiver Deebo Samuel.

Instead, the Jets used both of their first-round picks Thursday night from Vegas. That included going with our No. 3 overll player in cornerback Ahmad Gardner with the fourth selection.

With the pick that New York had offered up in a package for Samuel, general manager Joe Douglas took star wide receiver Garrett Wilson from Ohio State. This will provide young quarterback Zach Wilson with that outside receiving threat he desperately needs.

Here’s why the New York Jets hit a home run with both of their top-10 selections during the annual NFL Draft Thursday evening.

New York Jets hit home run with Ahmad Gardner as No. 4 pick in the 2022 NFL Draft

During pretty much the entire pre-draft process, this former Cincinnati star was considered the top cornerback in the 2022 NFL Draft. Suprisingly, former LSU standout Derek Stingley Jr. went No. 3 overall to the Houston Texans.

This opened the door for the Jets to run to the podium and select Ahmad Gardner with the fourth selection. According to Pro Football Focus, Gardner graded out as the second-best college football cornerback since the start of the 2014 season.

During his three-year run with Cincinnati, Gardner did not allow a single touchdown catch. That very same span saw him record nine interceptions. He’s confident in his ability and as boisterous as they come. This dude is going to be a perfect fit under head coach Robert Saleh’s defense. Think a prime Richard Sherman. That’s what the Jets are looking at here.

For a Jets team that has posted all of six wins over the past two seasons, acquiring a talent like this is a big deal. His confidence and ability out on the boundary will also add an attitude to a defense that was missing it in Saleh’s first season as the Jets’ head coach.

New York had pushed back against moving 2022 second-round pick Elijah Moore in a trade for Samuel. Instead, the team opted to team the slot receiver up with this former Ohio State stud.

Last season with the Buckeyes, Wilson recorded 70 receptions for 1,058 yards and 12 touchdowns.

“Drawing NFL comparisons to Diontae Johnson (PFF) and Mecole Hardman (Bleacher Report), Garrett Wilson is an exciting talent. The 6-foot receiver dominated at Ohio State thanks to his athleticism, elusiveness and YAC ability. He’ll create some early separation with his route-running and just needs an accurate quarterback in the right system to feed him the football in space for that ability to be displayed.”

That could potentially be huge for the New York Jets. Wilson’s struggles a season ago came with a lack of weapons at wide receiver. Initially, the young pass-catcher should be able to provide Zach Wilson with throwing windows on intermediate routes. It’s something he struggled with big time as a rookie.