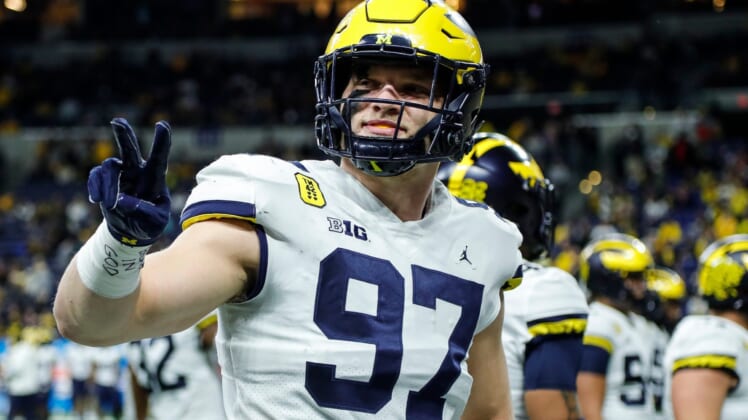 The Detroit Lions select Aidan Hutchinson with the first pick in the 2022 NFL Draft on April 28 in Las Vegas. It’s a selection that comes just over one year after Detroit drafted Penei Sewell with the 7th pick in 2021.

Hutchinson, a 6-foot-6 defensive end, delivered a breakout season for the Michigan Wolverines in 2021. He finished with the third-most sacks (14) in the nation and racked up 36 solo tackles in 14 games. The 21-year-old unanimous All-American selection won the Ted Hendricks Award – given to the best defensive end in college football – and the Lott IMPACT trophy – presented to the best defender – among numerous honors.

A native of Plymouth, Michigan, Hutchinson was rated as a 247 Sports’ four-star recruit in 2018. Viewed as a potential first-round talent a year ago, he returned for his senior season and played a crucial role in Michigan reaching its first College Football Playoff Semifinal.

Widely viewed as the best prospect in the 2022 NFL Draft class, Hutchinson gets to stay home in Michigan to play for the Lions after the Jacksonville Jaguars passed on him with the first pick.

Let’s dive into Hutchinson’s fit with the Detroit defense and why the Michigan edge rusher was the first pick in the NFL Draft 2022.

It’s part of the reason Hutchinson separated himself from others in the class. Kayvon Thibodeaux possesses more talent and offers a higher ceiling, but some teams were concerned about his motor and Campbell reportedly wasn’t a fan. As for Travon Walker, he’s more of a developmental project.

Hutchinson tested very well at the 2022 NFL Combine, posting high marks in the 40-yard dash, 10-yard split, 3-cone drill and shuttle. He finished with a 9.86 Relative Athletic Score, ranking 19th among defensive ends who tested at the combine since 1987.

Defensive end prospect with a can’t-miss combination of football character, skill and physical traits who is more likely to contend for occasional Pro Bowls than become an All-Pro playmaker. Hutchinson’s strength and flexion allows him to drop a deep anchor and set a very firm edge, and that is unlikely to change as a pro whether he’s used in 4-3 or 3-4 fronts….Hutchinson is an instinctive rusher, assailing the pocket with a non-stop barrage of activity. His hands are skilled and efficient to grease the edge while fluid counter steps open inside paths to the pocket. He needs to add a few more items to his rush menu in order to maintain his rush production against NFL tackles.

Hutchinson lacks the bend to get around the edge and the ideal arm length that many of the best pass rushers in the NFL have. However, his combination of power, athleticism, motor and flexibility make reaching his ceiling far more likely.

He made significant strides in the past year at Michigan to earn the right of being selected with the first pick. With an excellent work ethic and glowing reviews from coaches, he should be able to make an impact quickly at the next level.

Detroit can line Hutchinson up immediately at the defensive end with a strong belief he can make an immediate impact as a rookie. Adding him to the defensive line will also be a boost for edge rusher Romeo Okwara and a strengthened pass rush can make life easier for the secondary.

The Lions are scheduled to make their next pick at 32nd overall, closing out Round 1.

It came down to Hutchinson and Kayvon Thibodeaux. Ultimately, the Detroit Lions chose the Michigan native and the No. 1 player on our draft board. He fits the team’s culture perfectly and there is no reason he can’t be a quality starter for the next decade.