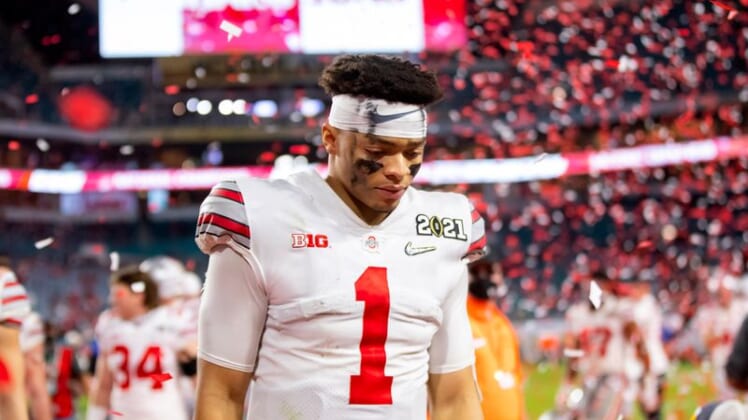 The 2021 NFL Draft is next month, and there figure to be five quarterbacks who are selected in the first round.

While some of the destinations for the top prospects are obvious, it’s still worth diving into where the absolute perfect landing spot is for each signal-caller.

Clemson’s Trevor Lawrence is almost guaranteed to be the Jags’ pick at No. 1 overall. He might be the cleanest draft prospect in NFL history, and certainly viewed as the surest thing since Andrew Luck.

Provided his career doesn’t end in early retirement as Luck’s did, Lawrence is destined to be Jacksonville’s biggest acquisition ever. The decorated collegian is no stranger to high expectations, which will inevitably accompany him to Duval County.

With a surprising head coaching hire in Urban Meyer, the Jaguars are boldly forging their way into a new era. They have the most cap space in the NFL to spend in free agency, and have Lawrence as a huge selling point.

This is the type of scrutiny Lawrence was seemingly born to stand up to. Similar in a sense to LeBron James, ever since high school Lawrence was expected to be an eventual No. 1 draft choice. As a true freshman at Clemson, Lawrence delivered on the hype and led the Tiger to a national championship.

Thanks to great size, a cannon for an arm, plenty of mobility to pick up chunk yards on the ground and an evident resiliency between the ears to shut out all the outside noise, no one is better prepared to embrace the baggage of going to a mostly-maligned Jaguars franchise.

There’s growing buzz that Zach Wilson is potentially going to supplant Lawrence as the top QB prospect. It doesn’t seem likely, given the aforementioned intangibles that give Lawrence a unique edge in terms of being anointed the No. 1 overall pick.

Meanwhile, Wilson is a one-year wonder, but what a year it was. He rose from obscurity in 2020 to burst onto the scene at BYU, with uncanny accuracy, ball placement, phenomenal mechanics and a knack for maintaining all those positives even when he was making off-platform throws.

Is there anyone better built for the bright lights of Broadway than him?

The Jets badly need a reboot at the quarterback position. Sam Darnold will net a decent draft pick for the rebuilding Gang Green, and Wilson is their dreamboat selection just after Lawrence.

Whereas Darnold is a quiet, reserved type of leader, Wilson brings obvious competitive fire, vocal leadership and, well, purely better arm talent than Darnold, along with a demonstrably superior avoidance of turnovers.

Wilson is bound to undergo some “welcome to the NFL” moments during his maiden pro campaign. However, he’s an absolutely perfect fit in New York, a refreshing change of pace from Darnold, and just the type of superstar talent the Jets need to compete in the AFC East with Buffalo and Josh Allen.

Given the success Joe Burrow had at LSU under Panthers offensive coordinator Joe Brady, it stands to reason Carolina will look for a similarly-skilled passer in Mac Jones.

A loaded supporting cast and lack of an elite arm were red flags that accompanied Burrow as a prospect. He still wound up going first overall to the Cincinnati Bengals, and flourished as a rookie until he got injured.

Jones isn’t quite the prospect Burrow was due to his inferior improvisational know-how and lackluster athleticism. However, when Brady spreads out the field and needs a QB to simply distribute the ball, he could do a lot worse than having someone like Jones under center.

In his breakout 2020 campaign for Alabama in which he led the Crimson Tide to another national title, Jones completed 77.4% of his passes for 4,500 yards, with 41 touchdowns to only four interceptions. Also notable is that he averaged 12.8 air yards per attempt, so it wasn’t a bunch of dinking and dunking on his part.

Those air yards per pass were far higher than the totals registered by Lawrence in his three seasons at Clemson (9.8). To still be that precise shows how impressive Jones is. And it’s not like his arm is weak. He can evidently throw the ball downfield with the best of them.

Already armed with the likes of DJ Moore and Robby Anderson at wide receiver, if the Panthers go all-in on Jones, he’d be ready right away to start, whereas the other dual-threat signal-callers on the board probably need a year to sit and learn.

Jones also has the built-in advantage of practicing with Carolina’s staff at the Senior Bowl, and the team doesn’t have to give up a ridiculous amount to try to land Deshaun Watson in a blockbuster trade.

Ohio State’s gimmicky offense actually did Justin Fields a disservice. If he’s pressed into duty as a rookie, he’ll make plays with his legs and can deliver some big-time throws, but it’s not the ideal recipe for his long-term success.

With Burrow in Cincinnati, Baker Mayfield in Cleveland and Lamar Jackson in Baltimore, the Steelers have to be looking around at the rest of their AFC North division horrified about the future. Ben Roethlisberger is in probably his last year at quarterback, and Dwayne Haskins and Mason Rudolph hardly comprise a viable contingency plan.

Enter Fields. Since the Cowboys paid Dak Prescott big money, they aren’t in the market for QB, and need to accumulate assets and cheap, younger players with an ominous salary cap outlook for the next three years.

The last time Pittsburgh made a trade like this was for linebacker Devin Bush, who missed most of 2020 due to injury but has lived up to his billing as a top-10 choice. Bush will be back in the heart of the linebacker corps, and even with Bud Dupree leaving in free agency, there are enough stars on the Steelers defense to ensure they’ll still be strong there, lessening the need to build depth through the 2021 draft.

That Bush trade cost GM Kevin Colbert a pick swap (20th to 10th, a second-rounder and a third-round pick in the next year’s draft. This hypothetical deal to land Fields is only a slight bump up from that compensation, with a 2022 second-round selection kicked in, rather than a third.

Fields will be under no pressure whatsoever to play right away as Big Ben tries to give it one last run. He can learn Pittsburgh’s system under new offensive coordinator Matt Canada, and be ready to take the reins as an NFL sophomore.

Perhaps even more raw than Fields is, Trey Lance at least has experience in a pro-style, run-first system from his one season as a starter at North Dakota State.

After an electrifying pro day, there’s no denying Lance is going to be a Day 1 pick. It’s simply a matter of when his name will be called.

Granted, it’s a stretch to think that the Steelers are guaranteed to trade up for Fields. However, there’s almost guaranteed to be a move up from some QB-needy team to acquire either the Ohio State star, or possibly Mac Jones.

Given Lance’s inexperience and the fact that he’ll only turn 21 shortly after the draft, it’s hard to imagine any team trading up to get him. That’s why this is the perfect scenario for both him and the 49ers.

San Francisco has reportedly been doing its “due diligence” on quarterbacks this offseason in an effort to upgrade from oft-injured field general Jimmy Garoppolo. Almost by default, it appears Jimmy G will be the man under center in the Bay Area for 2021, yet his injury issues have derailed the 49ers when he’s been out of the lineup.

Ideally, Garoppolo stays healthy to get through the 2021 campaign, and head coach Kyle Shanahan gets to mold the highest-upside talent he’s ever had at the quarterback position in Lance.

If things play out this way, San Francisco doesn’t have to mortgage its future to reach for a rookie. Lance instead falls in the Niners’ lap, and gets to learn under Shanahan, which may well lead to him becoming the biggest superstar of the 2021 QB class.