Urban Meyer may be the greatest thing to ever happen to the Jacksonville Jaguars. Find out why their head coach has all the means to build a winner in the NFL. 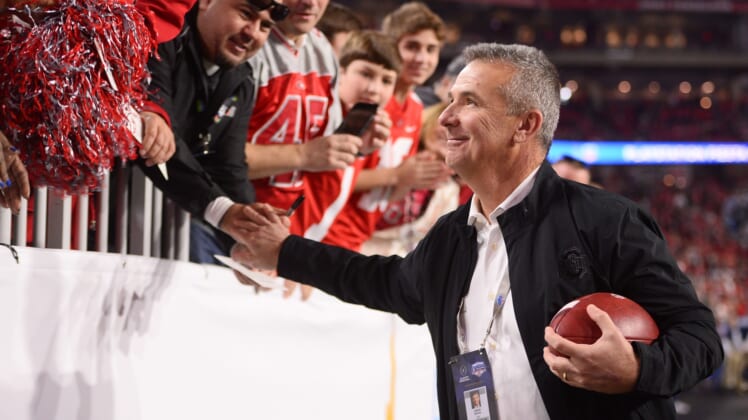 The Jacksonville Jaguars have finalized a deal to make Urban Meyer their new head coach, and it’s probably the best move the franchise will have made since it joined the NFL for the 1995 season.

Meyer’s hiring is bound to be polarizing, with many already dismissing his ability to jump from college to the pros. However, there are several reasons why Meyer is destined for greatness at the NFL level.

1. Having a franchise quarterback is half the battle

The Jaguars hold the No. 1 overall pick in the 2021 NFL Draft. Even with Meyer’s most recent tenure as head coach of the Ohio State Buckeyes, it’d truly be a shock if Jacksonville allowed him to hand-pick Justin Fields over the obviously superior prospect in Clemson’s Trevor Lawrence.

Barring a real shocker at the top, Lawrence will be under center for the Jags in 2021 and well beyond. He’s one of the best quarterback prospects of all-time, full stop. He has all the tools as a passer any coach would dream of: A balanced throwing base, whip-fast release, tons of arm strength, accuracy and touch to all areas of the field, and the ability to process and make full-field reads. Oh, and Lawrence has the wheels to run when a play breaks down.

Lawrence almost sounds too good to be true. That’s how good the 6-foot-6, 220-pound dynamo is. The Tigers won a national title with Lawrence as a true freshman, and he led Clemson to two subsequent College Football Playoff appearances, ultimately posting a 34-2 record as a starter.

Having someone at the most important position who’s so accustomed to winning is vital for Meyer, who was notorious for taking losses hard in his heyday. The reality is, Meyer won’t have the talent advantage almost every time his team sets foot on the gridiron in the NFL. However, he will have a potential legend at the position in Lawrence for years to come.

Part of the appeal for Meyer taking the Jags’ gig had to be the chance to coach Lawrence. If he’s smart, and he is, Meyer will do everything he can to support the Clemson product by surrounding him with all he needs to succeed.

2. Jacksonville Jaguars have the most cap space in NFL

That springboards into this next point. How about that headline-grabbing fact? How about them apples? All the dollar bills. Over $73 million in salary cap room for 2021. It’d take an epic failure to mess that up.

All the incompetence during previous general manager Dave Caldwell’s tenure at least set the table for Meyer to essentially have carte blanche in reconstructing the Jaguars’ roster.

Jacksonville still needs a new GM, although Matt Miller reported interim man Trent Baalke may be elevated to full-time status. The good news is, whichever way the team goes for that post, with Meyer already in the fold, the coach will have more personnel say, but he shouldn’t overstep his boundaries there. He’s probably wise enough to understand an NFL personnel man can help him with the task of acquiring players that fit his vision.

Oh, but don’t get it twisted: Alongside a new executive he’s comfortable with and thanks to Lawrence’s presumed arrival, Meyer will get to hit the recruiting trail and get the attention of all the prominent free agents on the open market in 2021, and really, in the next several offseasons.

The luxury of landing Lawrence is he’ll be on a rookie contract, which creates even more flexibility than Jacksonville would’ve had if the team needed to acquire a pricey veteran to upgrade the quarterback spot. Meyer was such a success in college in large part due to his knack for convincing players he could build a winner with their help.

A sales pitch to a pro athlete as opposed to a teenager is going to be different in a variety of ways, yet the principles are the same. Meyer is going to embrace the challenge of convincing high-end, established NFL stars to join what he’s building with Lawrence in Jacksonville. Thankfully, the Jaguars have the classic “money talks” crutch to lean on, too.

3. Jumping from college to the pros has never been easier

People are really sleeping on this right now. So many concepts from spread college offenses are trickling into the professional game. It seems increasingly prominent by the year. Look no further than the Arizona Cardinals, who hired Kliff Kingsbury as coach, drafted Kyler Murray No. 1 overall and have been basically running the Air Raid offense.

Kingsbury had middling results during his coaching tenure at Texas Tech, leading many to criticize Arizona’s move to hire him. Even in a stacked NFC West division featuring last season’s Super Bowl participant, the San Francisco 49ers, along with the Rams and Seahawks, it took a Cardinals collapse down the stretch to barely miss the NFL playoffs.

So, Arizona is right on track in its rebuild, and Carolina was quite competitive in former Baylor boss Matt Rhule’s first season at the helm. The architect of LSU’s dominant 2019 national championship offense, Joe Brady, is the Panthers’ play-caller and is already garnering head coach interest.

In Meyer’s case, he was the one who helped pioneer the spread system movement at major college programs. Lawrence masterfully operated the spread at Clemson and pro-style concepts sprinkled into the playbook. It stands to reason Meyer can make that work, given his prior ability to adapt and create a winner at multiple collegiate stops.

Bottom line: past college-to-pro failures like Steve Spurrier, Nick Saban, Greg Schiano and Chip Kelly all predated the current era. Kelly was ahead of his time, yet too uncompromising and too controlling of personnel to last beyond his initial wave of promise in Philadelphia. Meyer just has to not make those mistakes Kelly did. Another common thread: None of those coaches had quarterbacks as gifted as Lawrence, which as mentioned, is half the battle.

What’s also great is, Lawrence can help the Jaguars overcome multiple deficiencies. Where they aren’t lacking right now in personnel is mostly on offense. Other than upgrades at offensive tackle and tight end, Jacksonville doesn’t need to worry a lot about that side of the ball, and can instead address a defense that yielded the second-most yards and points per game in 2020.

4. All Urban Meyer does is win, and build elite offenses

First it was Bowling Green, where he went 17-6 in two seasons. Then, it was Utah, where Meyer developed quarterback and soon-to-be NFL Comeback Player of the Year Alex Smith into a No. 1 overall draft pick. The coach closed out his second season with the Utes on a high note: a perfect 12-0 record, and a Fiesta Bowl victory to finish No. 4 in the AP poll.

From there, the groundwork was lain for Meyer to go to the University of Florida, which was a fringe top-25 team in the three years since Spurrier left as coach. After making immediate improvements to go 9-3 in his maiden year in Gainesville, all Meyer did for an encore was go 13-1 and beat Ohio State for a national championship. That was the first of two national titles Meyer would win with the Gators, who posted two more 13-1 records in 2008 and 2009.

The Buckeyes eventually came calling for the Ohio native, and Meyer couldn’t turn them down. A postseason ban didn’t stop Meyer from willing Ohio State to a perfect 12-0 in his first season back home. He’d add another national championship in 2014, and in each of his final five seasons, OSU was in the top six in the national polls.

Meyer’s total record to date is 187-32. Sometimes there are advanced stats to tell the story, sometimes it’s as simple as that Bill Parcells adage, “You are what your record says you are.”

It might actually speak more to what Meyer is able to do at the quarterback position in terms of getting Heisman Trophy-caliber production that none of his quarterbacks since Smith have ever really worked out in the NFL. Yes, Meyer could always recruit strong supporting casts for his signal-callers, yet at some point, he deserves a lot of credit for succeeding the way he did.

In the NFL, Meyer won’t be able to get by with as many quarterback designed runs as he did in college. Nor is that going to be his plan with Lawrence presumably at QB. Like he’s done everywhere else, Meyer will adapt, and carry over his culture of premier leadership and competition, which should bode well at any level of football.

5. Jaguars are all-in, will be patient with Urban Meyer

Health problems have plagued Meyer during his coaching career, but if it were bad enough to keep him out of action completely or not allow him to do the Jaguars’ job at full tilt, there’s no way the 56-year-old would’ve signed up in the first place.

Meyer is going to be met in Jacksonville with high expectations out of the gates, which is understandable, given his prolific winning past, the fact he’ll have Lawrence and will likely field a vastly improved roster.

With all that comes an understanding that Meyer should have a long runway to prove himself. This team did have a 1-15 record in 2020, marking Doug Marrone’s third straight double-digit loss season before he was finally shown the door. Really, even the most exceptional roster rebuild isn’t guaranteed to jell right away.

The hope is, Meyer’s incredible leadership and ability to win immediately in all of his previous stops will expedite the Jags’ path back to NFL relevance. But let’s be honest: the mere acquisitions of Meyer and Lawrence put the Jaguars squarely back on the NFL radar.

Between Meyer’s demonstrated quality of making an instant impact and Lawrence being among the most polished QB prospects in history, don’t be surprised if Jacksonville pops into playoff contention sooner rather than later. Even if they don’t, again, Meyer has time, financial resources, recruiting know-how and Lawrence all working in his favor to be a runaway success as an NFL head coach.