Get ready for a rapid rebuild, Jacksonville Jaguars fans. The 2021 NFL Draft is on the horizon, and Trevor Lawrence is on the way. 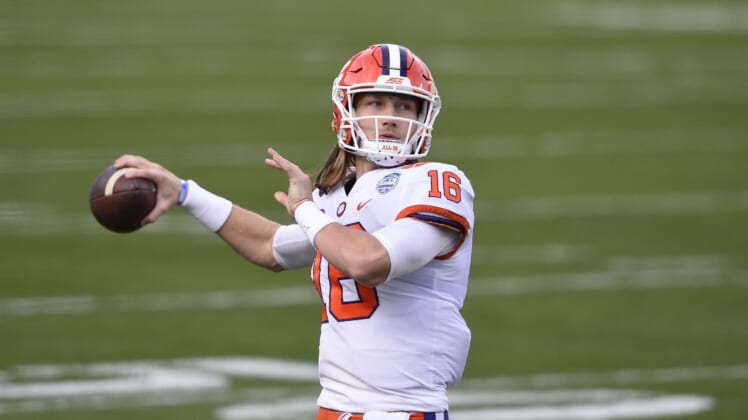 The Jacksonville Jaguars are the official winners of the Trevor Lawrence sweepstakes, becoming a lock to select the Clemson quarterback No. 1 overall in the 2021 NFL Draft.

Lawrence will go a long way in curing Jacksonville’s perpetual woes as an NFL laughingstock, but the Jags still have to find a new coach, general manager and build a roster around the prodigious passer to pull off a successful rebuild. Otherwise, they’ll risk ruining the best gift in franchise history.

We’ll take a closer look at what Lawrence’s imminent arrival means for Jacksonville and other huge moves the organization can make to expedite its path toward playoff contention.

Hard to think of a better quarterback prospect than Lawrence in the modern era this side of Andrew Luck.

In many ways, Lawrence is better than Luck was at this point. He could be on his way to a second national championship, he’s bigger, stronger, more accurate and seemingly less turnover-prone than Luck.

What’s pretty great about this, too, is that the Jaguars actually have a decent foundation to support Lawrence and plenty of room to build off it. This is in reference to the offensive line, who rank eighth in Football Outsiders‘ rankings for adjusted line yards.

Led by center Brandon Linder, Jacksonville is pretty strong in the trenches on offense. Andrew Norwell and A.J. Cann rank fourth and 11th respectively in Pro Football Focus’ pass blocking grades among guards. Even a mild upgrade at offensive tackle this offseason will go a long way.

Lawrence can escape the pocket and extend plays with his feet, and has shown at least in college he can elevate the play of those around him. With a solid receiver duo in DJ Chark and Laviska Shenault already in the fold and help potentially on the way via the draft or free agency, Lawrence is suited for immediate success in the passing game.

The rushing attack is also in good hands, as Lawrence has the wheels to be a dual threat, and first-year undrafted running back James Robinson has been a revelation with over 1,000 yards rushing to date.

With a legendary history in the college football world, particularly at the University of Florida, how awesome would it be to see Meyer try his hand at the NFL level in the Sunshine State?

Just the opportunity to coach Lawrence alone may be enough to lure Meyer out of his TV job and back onto the sidelines. Never before has Meyer coached in the pros, but he’s as competitive as coaches come, and there have always been whispers about him when vacancies open up each year.

Chatter and speculation are swelling that 2021 could finally be the time, though. Meyer is linked to Jacksonville specifically according to the latest buzz.

What better chance will Meyer ever have? He’s virtually guaranteed a franchise quarterback in Lawrence. It’s virtually a clean slate to work with in Duval County.

Meyer would have significant input regarding how the team is constructed, and if the Jags need anything right now, it’s a program builder. With successful tenures at Utah, Florida and Ohio State, there’s hardly anyone better than Meyer to fill the role.

The modern NFL is designed to reward up-and-coming teams who draft a great young quarterback on a rookie contract. This is going to be the case for the Jags once they acquire Lawrence.

One move that certainly did Jacksonville no favors in the past couple years but could pay huge dividends now is the trade involving lockdown cornerback Jalen Ramsey. In gaining two first-round picks from the Los Angeles rams in that trade, fired general manager Dave Caldwell set the team up for a big maneuver down the road.

Instead of sacrificing a premium draft asset for an established, expensive player, the Jags get the best of both worlds in the following trade scenario with the Philadelphia Eagles:

This is a legitimate possibility, as the rebuilding Eagles try to pry themselves from salary cap hell thanks to their expensive Carson Wentz contract. In Pro Football Network‘s mock draft simulator, this very trade was executed successfully.

Any one of those players would go a long way in transforming the Jaguars on either side of the ball. Oh, and Jacksonville still picks at 44th and 65th overall to go along with two fourth-round selections.

That’s a no-brainer draft day trade for both sides. If the Jags experience enough growing pains in 2021, suddenly their future pick could be a very high one for Philly.

What’s also great about the Jags’ current rebuild is the fact that they’ll enter 2021 with the most cap space in the NFL at $77.6 million, with no big-ticket impending free agents to pay from their own roster.

Why not land someone like the Denver Broncos’ stud free safety to give the secondary a real jolt? Simmons enters Week 17 as Pro Football Focus’ No. 6 highest-graded safety, and was second in PFF’s grades at the position in 2019.

The defensive backfield has been a major problem spot in Jacksonville since Ramsey’s departure. Bringing in a veteran like Simmons, who’s had the savvy to thrive in Broncos coach Vic Fangio’s complex scheme, should be a massive priority given all the cap room the Jags have at their disposal.

Following his second-team All-Pro selection last season with a Pro Bowl bid, Simmons’ stock is soaring, and he should be rewarded with a handsome payday from a team in dire need like Jacksonville.

Quite the opposite of Simmons in terms of trending down at the moment, Gilmore was the NFL’s Defensive Player of the Year in 2019, only to see his play drop off in a big way this year.

Let’s be clear about that, however: many of the Patriots’ issues on defense are due to numerous starters opting out of the season, a lack of top-flight edge-rushers and the toothless offense putting the unit in difficult spots.

Gilmore has also been banged up, and recently suffered a partially torn quadriceps muscle. Provided he recovers as he should, bear in mind Gilmore is entering a contract year, and remember, it was reported in November he was being shopped around by New England.

The problem is, due to his lackluster 2020 campaign all around, the Pats have lost leverage to request something as high as a first-round pick. Bill Belihick won’t want to see Gilmore walk as a free agent for nothing next offseason, and has a lengthy history of moving off veteran players earlier rather than later.

For all these reasons, the Jaguars can step up and provide a new home for Gilmore at least for 2021, probably sacrificing minimal compensation. If the early returns are promising, they have tons of financial resources to sign him to his final big contract, and Gilmore would serve as an ideal mentor for 2020 first-round corner C.J. Henderson.