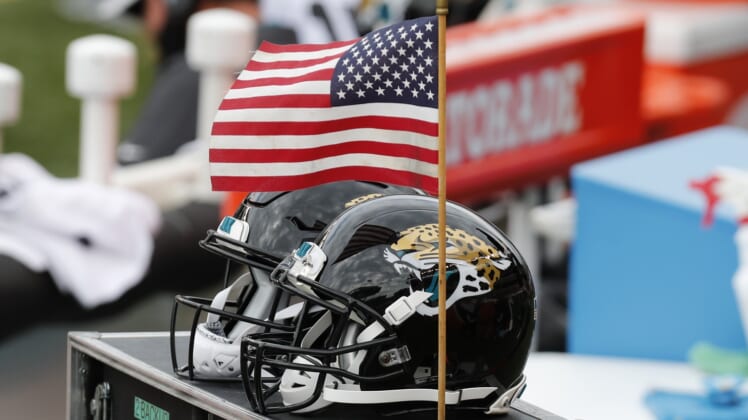 Oct 4, 2020; Cincinnati, Ohio, USA; Jacksonville Jaguars helmets on the sideline during a game against the Cincinnati Bengals in the first half at Paul Brown Stadium. Mandatory Credit: David Kohl-USA TODAY Sports

About a half dozen NFL head coach openings are about to become the talk of the league with the 2020 regular season now in the rear-view mirror.

The six teams likely looking for a new head coach range from a Jaguars squad that has to be seen as appealing now that it is going to have the top pick in the 2021 NFL Draft to a Lions squad that represents the least-attractive opening.

Here, we rank the six most-likely NFL head coach openings as the 2021 cycle gets going around the league.

Two words. Trevor Lawrence. By virtue of losing their final 15 games of the 2020 NFL season, the Next Jacksonville Jaguars head coach will have this to look forward to. Sure Lawrence was outplayed by Justin Fields in the College Football Playoff semifinal. But he’s still the consensus No. 1 pick in the draft. He’s a generational talent, and will change the dynamics in a big way in Duval.

In addition to this, the next Jaguars general manager is slated to have over $81 million to spend in free agency. Let’s not even mention the fact that Jacksonville boasts two first-round picks stemming from the Jalen Ramsey trade. This is, without a doubt, the best NFL head coach opening right now. Once Doug Marrone is ultimately let go, expect rumors to pick up about Urban Meyer potentially heading to Jacksonville.

Justin Herbert. Whoever is tasked with becoming the next Chargers head coach will have one of the best young quarterbacks to work with. Herbert finished up his rookie season having thrown for north of 4,300 yards with 31 touchdowns against 10 interceptions. He was an elite rookie signal caller once the former Oregon standout replaced Tyrod Taylor under center.

The Chargers are also an ideal NFL head coach opening in that they still boast a tremendous amount of talent on the defensive side of the ball. Joey Bosa remains an elite pass rusher. It also doesn’t hurt that the Chargers exist in the nation’s second-largest media market and are playing in a state-of-the-art new venue in Southern California.

We get it. The Texans don’t have a first or second-round pick in the 2021 NFL Draft. They’ll likely be forced to move on from all-time great pass rusher J.J. Watt. There’s a ton of core free agents that might move on to greener pastures. The Texans’ front office and ownership group has been a downright disaster.

That’s all fine and dandy. What Houston does have that will making it an ideal landing spot for an NFL head coach is Deshaun Watson. The young quarterback remains one of the top players at this position in the league. He was downright brilliant during the 2020 campaign despite some major team-wide struggles. Having Watson locked up over the next several years will be attractive for potential head coaches.

Whether it’s Sam Darnold or Justin Fields under center for the Jets next season, general manager Joe Douglas has a ton of work to do. That obviously starts by finding a new NFL head coach to replace Adam Gase, who was in over his head in two seasons with the Jets.

However, this opening becomes extremely attractive based on recent reports suggesting that the Jets might trade down from the second spot in the 2021 NFL Draft. Imagine the bounty a talent-stricken New York organization could get in a trade down with another team looking to move up for Fields or Zach Wilson. It would be nothing short of a fully-loaded Brinks Truck, potentially helping expedite a rebuild in the nation’s largest media market.

A lot of this will depend on whether Matt Ryan and Julio Jones return to the Falcons next season. At this point, that’s an open question. Should both move on to contending teams, this specific NFL head coach opening will be a lot less attractive. Simply put, Atlanta would then be in full-scale rebuild mode.

Even then, the possibility of these two future Hall of Famers remaining with the Falcons makes this an attractive opening. Specifically, Ryan playing under an offensive-minded head coach for the first time in his brilliant career. It will keep the big names interested in this opening. That’s for sure.

In terms of NFL head coach opening, this has to be seen as the least-attractive. Matthew Stafford could have very well played his final game in Detroit. The team lacks any type of identity on either side of the ball. Simply put, these Lions are complete bottom feeders right now.

Rumors suggest that 49ers defensive coordinator Robert Saleh is favored to land the Lions’ job. If that is indeed the case, he’ll have to bring a respected offensive mine with him. Even then, this organization doesn’t have anywhere near the talent to succeed over the short term. It matters very little who it brings in to replace Matt Patricia on a full-time basis.