Falcons rumors: Julio Jones, Matt Ryan could be traded in 2021 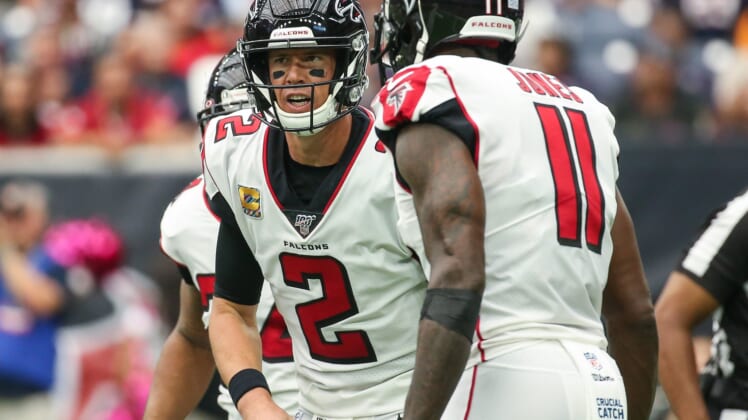 Falcons rumors: As the 2020 NFL trade deadline approached, Atlanta Falcons wide receiver Matt Ryan and Julio Jones were two of the most talked-about blockbuster trade candidates. While both ultimately stayed in Atlanta, their returns aren’t guaranteed in 2021.

The Falcons made sweeping organizational changes in October, firing general manager Thomas Dimitroff and head coach Dan Quinn. With the team set to head in a new direction, conducting an ongoing search to find a new voice to lead the front office, even bigger changes could be on the horizon.

[brid video=”658814″ player=”23231″ title=”Top%20Candidates%20to%20Replace%20Dan%20Quinn%20as%20Falcons%20Head%20Coach” duration=”93″ description=”The Atlanta Falcons’ decision to fire head coach Dan Quinn was not necessarily that big of a surprise. The Falcons had struggled to field a competitive team under Quinn since earning a trip to the Super Bowl back in 2016. That included a disastrous 0-5 start to the 2020 NFL season.However, this move will create some wide-ranging ramifications throughout the NFL world once the 2020 season comes to a conclusion. The Falcons will be a prime spot for coaching candidates, especially with Matt Ryan and Julio Jones still doing their thing in Atlanta.As for the Falcons, it’s about time for them to give Ryan that offensive-minded head coach after he spent his first 12-plus seasons working under defensive-minded head coaches. It’s in this that we look at the top candidates to replace Quinn as the Falcons’ head coach.” uploaddate=”2020-10-12 19:24:33″ thumbnailurl=”https://cdn.brid.tv/live/partners/17660/thumb/658814_t_1602530691.png” contentUrl=”https://cdn.brid.tv/live/partners/17660/sd/658814.mp4″]

The search for a new general manager is ongoing, with multiple candidates already interviewed. While a hire likely won’t be made until after the NFL season concludes, when Atlanta can interview front office executives currently employed by other teams, it is already making its pitch to targets on the freedom that this opportunity offers.

Speaking to The Athletic’s Jeff Schultz and Tori McElhaney, Falcons president Rich McKay said the new general manager would be empowered to trade Matt Ryan and/or Julio Jones this offseason. The team is open to a rebuilding project if the candidate can sell them on a plan to become winners.

Atlanta has already looked into nearly two dozen candidates for the position, with some being done for background work. The organization is hopeful to interview “at least five or six,” of their top candidates, with owner Arthur Smith making the final decision within two weeks after the team’s season concludes.

Once a hire is made, the focus will immediately shift towards finding a head coach. However, interim coach Raheem Morris has a real shot at retaining the title and is set to be interviewed by the club this week. From there, all the talk will center on this team’s future.

If the Falcons make both Julio Jones and Matt Ryan available for trade this offseason, there will be no shortage of interest from rival NFL teams. While both players are playing on large contracts and are in the final years of their prime, either could be a huge addition for an offense.

Ryan, a four-time Pro Bowl selection and the 2016 NFL MVP, would provide an instant upgrade for several NFL teams. The Indianapolis Colts and San Francisco 49ers, clubs with championship-caliber talent throughout the roster, could become Super Bowl contenders in 2021 with the 35-year-old quarterback.

The Falcons are projected to be $26.5 million over the 2021 NFL salary cap, with Ryan carrying a $40.9 million cap number next season and $50 million in dead money. It would hurt the team’s cap if they move him before June 1, but they could shave $23 million with a post-June 1 trade.

Jones, who turns 32 in February, would be a fantastic addition for any offense. A seven-time Pro Bowl selection and member of the NFL 2010s All-Decade Team, there likely wouldn’t be too many concerns about his nagging hamstring injury after a full offseason to recover.

If the new general manager decides to pursue a rebuild, it will be a multi-year effort for Atlanta. Financial consequences will be a part of that, but it’s clearly something on the table this offseason.