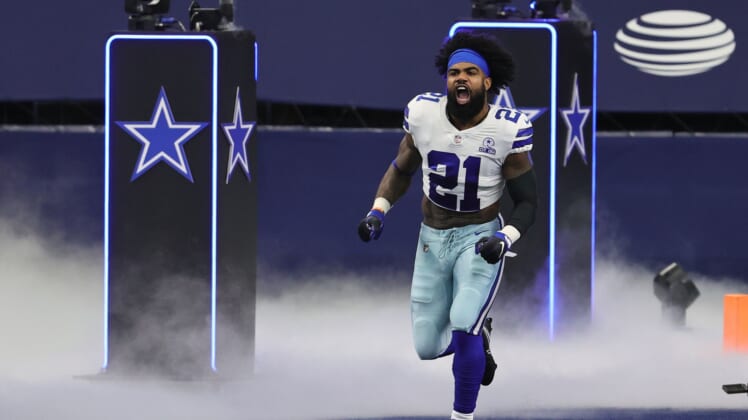 NFL injury report: The 2020 NFL season is headed to Week 16, with NFL teams competing for playoff spots and fantasy managers competing for championships. With so much on the line in this upcoming slate, injuries will once again play a significant role.

Everyone will remember this season for being unforgiving to star players. Christian McCaffrey, Julio Jones and Michael Thomas have each headline NFL injury report for nearly every week this year. Meanwhile, fantasy heroes like Antonio Gibson and Stefon Diggs are now dealing with issues.

Let’s dive into the NFL injury report for Week 16.

This will go downs as a season Christian McCaffrey and fantasy managers who drafted him will want to forget. Originally, Carolina’s All-Pro running back went down in Week 2 with a high-ankle sprain. He exploded for 151 scrimmage yards and two total touchdowns in his Week 9 return, but came out of the game with a shoulder injury. Then, on the verge of returning in Week 14, he hurt his thigh.

NFL free agency: Star players who could be cap casualties in 2021

On Thursday, the Panthers listed McCaffrey as doubtful to play in Week 16. While it left the door open for a return, head coach Matt Rhule said he wasn’t even sure if the 24-year-old running back would be able to play in Week 16. For as badly as he might want to return, the Panthers are playing it safe with their franchise star. McCaffrey is out for Week 17 and Mike Davis is an RB2 in his absence.

Stefon Diggs had his way with the Denver Broncos secondary in Week 15. The NFL’s leading received racked up 11 receptions and 147 receiving yards, but everyone was left holding their breath late in the fourth quarter. In the closing minutes, Diggs was carted into the locker room with a foot injury.

Fortunately, per NFL Network’s Kim Jones, everyone can breathe a sigh of relief. Diggs avoided a serious injury, with the team feeling confident that this issue won’t affect his availability moving forward. The report has been confirmed throughout the week, with Diggs being a full participant in practice and then being removed from the NFL injury report on Friday.

Set to face the New England Patriots in Week 16, Diggs ranks as a top-10 receiver. We like the matchup even more with All-Pro cornerback Stephon Gilmore out for the season.

McCaffrey and Julio Jones are in similar situation. Atlanta’s star receiver has fought through a persistent hamstring injury this season, playing in 9-of-14 games. After his latest setback, the Falcons have held Jones out from the past two games.

Unfortunately, for those hoping for some Week 16 magic, it’s not coming. The Falcons are focused on draft position at this point of the season. Equally important to the organization, they want to do right by Jones to have a healthy offseason.

For the third consecutive week, the Falcons ruled out Jones days in advance of their game. In his absence, Calvin Ridley is a high-end WR1 in Week 16 against the Kansas City Chiefs and Russell Gage offers DFS appeal.

After fighting through a hamstring injury in Week 14, Daniel Jones came out of that game with a sprained ankle. After being a limited participant in practice leading into Sunday’s game against the Cleveland Browns, New York ultimately played it safe and kept the second-year quarterback out.

Jones returned to practice this week, but as a limited participant. The 23-year-old quarterback still isn’t fully healthy, but the Giants view these game reps as too valuable to miss. He will start on Sunday against the Baltimore Ravens, a nightmare matchup for him. Jones is completely off the fantasy radar and Baltimore’s defense is a top-three play for Week 16.

The Saints couldn’t deal with a hobbled Michael Thomas any longer. Less than 48 hours after everyone was excited about Drew Brees’ return, this offense lost another one of its stars. It’s been a frustrating year for Thomas, between a hamstring injury, high-ankle sprain and a suspension for punching a teammate. In total, he will have played in just 7-of-16 games this season.

With Thomas out for Week 16, Alvin Kamara becomes the go-to target for Brees. The future Hall of Fame quarterback already loved making short throws to his star running back and we expect Kamara to see even more targets moving forward. Emmanuel Sanders becomes the top receiver for the Saints, but he’s a high-end WR3 against the Minnesota Vikings on Friday night.

Update: Antonio Gibson expected to be active for Week 16

The moment Antonio Gibson was diagnosed with a turf toe injury, a multi-week absence became the expectation. Sure enough, Washington’s offense has operated without the explosive rookie for the past two games. Fortunately, there are at least some signs pointing towards a return.

On Sunday morning, NFL Network’s Ian Rapoport shared that Washington expects Antonio Gibson to play in Week 16. He last played in Week 13, with the turf toe injury causing him significant pain. Now that he’s recovered, he should be out there as the featured running back in Washington’s offense. Gibson draws an exciting Week 16 matchup against the Panthers (allowed 195 rushing yards to the Green Bay Packers).

Heading into Week 15, the Cowboys kept indicating Ezekiel Elliott would play through his calf injury. He managed to do it the week prior, but it was hard to ignore the team’s practice report. Elliott never practiced leading up to Week 15 and he was ultimately inactive against the San Francisco 49ers.

Dallas could certainly allow Elliott to return in Week 16, but there’s an incentive to sit him. Tony Pollard has earned an opportunity to prove he can be a starting-caliber running back and he looked good against the 49ers. Since the Cowboys are in the hunt for a higher draft position, sitting Elliott would be a wise decision. Plus, the organization might already be leaning that way based on the recent drama.

With that said, Elliott has made significant progress in his recovery and is now expected to suit up on Sunday. Given how Pollard looked, though, it wouldn’t be a surprise if Dallas used an RBBC for this Week 16 matchup.As a result, Elliott becomes a fringe RB2.

The Cincinnati Bengals haven’t exactly been transparent since Mixon suffered his mid-foot sprain in Week 6. It was first treated like this would be a short absence, Mixon didn’t land on injured reserve until Week 10. Since then, head coach Zac Taylor has kept information close to his vest.

While the Bengals refuse to rule Mixon out for the season, no one should expect him to come off IR at this point. Cincinnati is one of the worst teams in the NFL and bringing Mixon back would only get in the way of this team pushing to secure a top-three pick. We’ll see Joe Mixon in 2021.

Kenny Golladay suffered a hip injury on Nov. 1 against the Indianapolis Colts, an issue that was expected to sideline him multiple games. He seemed on the verge of returning before Thanksgiving, earning an estimated ‘limited’ participation in practice. Ever since, he hasn’t been able to do anything with the team.

Interim coach Darrell Bevell admitted before Week 15 that shutting Golladay down for the season was on the table. While the Pro Bowl receiver wants to finish his season on a positive note, there’s zero reason to rush back as he heads into free agency this offseason. Just like with Mixon, we’ll see Golladay again in 2021.

The San Francisco 49ers have been devastated by season-ending injuries this season. When George Kittle went down in Week 8 with a broken bone in his right foot, many feared he wouldn’t return in 2020. With Jimmy Garoppolo being kept out for the rest of the year, it felt even more likely that Kittle could be shut down. For fantasy managers with Kittle who made it to Week 16, weeks of patience might pay off.

Before Week 15, the 49ers designated Kittle to return from injured reserve. He was able to practice late in the week, pushing him closer towards a return to action. According to Ian Rapoport, Kittle has a shot to come off IR in Week 16. He used last week’s practice sessions to shake the rust off and looked good. With no fears of a setback, Kittle could be active against the Arizona Cardinals on Saturday.

San Francisco 49ers: How the 49ers should approach crucial 2021 offseason