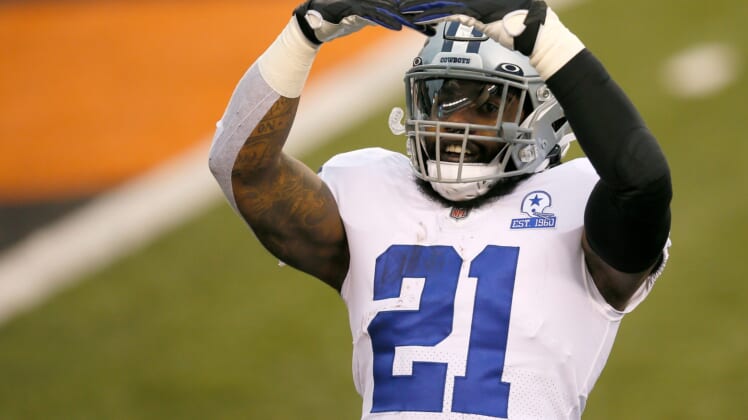 The Dallas Cowboys salvaged what could end up being a lost season on Sunday, winning without All-Pro running back Ezekiel Elliott. The backdrop to Dallas’ 41-33 win over the San Francisco 49ers was Elliott being inactive due to a calf injury he suffered back in early December.

It was a rather interesting development in that Ezekiel Elliott was listed as questionable to go throughout the week. Remember, it was a few days ago that Cowboys head coach Mike McCarthy indicated that the star running back would more than probably suit up. That did not happen.

Following the Cowboys’ season-saving win over San Francisco in Week 15, McCarthy had a rather interesting take on Ezekiel Elliott.

Cowboys’ Mike McCarthy on Ezekiel Elliott: “We felt like it was not in the best interest to go with him”

McCarthy did not expand much further on what exactly kept his star running back out. What we do know is that Ezekiel Elliott has struggled big time with both consistency and hanging on to the ball thus far this season.

The three-time Pro Bowl performer is averaging less than four yards per rush and has fumbled a career high six times in 13 games. Elliott has put up 80 yards or more just one time in his past eight outings.

Meanwhile, second-year Cowboys back Tony Pollard continues to impress. The Memphis product gained 132 total yards on 18 touches against the 49ers on Sunday. We’re not ready to say that there’s a “running back controversy” between Ezekiel Elliott and his cheaper alternative, but how this season has played out is interesting.

Could the Cowboys move on from Ezekiel Elliott?

Signed to a record-breaking six-year, $90 million extension back in September of 2019, Elliott simply has not lived up to expectations this season. He’s not performing anywhere near the clip that his salary suggests. It’s led to some speculation that the Cowboys might look to trade Ezekiel Elliott during the offseason.

Pollard’s performance adds another layer to this. The former fourth-round pick has now tallied 575 total yards at a clip of 5.0 yards per touch as a sophomore.

Could the Cowboys look to move on from Ezekiel Elliott his coming offseason? Expect speculation to pick up in this regard should he remain inactive or split carries with Pollard moving forward.

As for the Cowboys, their win over San Francisco on Sunday has the team at 5-9 on the season and just one game out of first place in the NFC East. Perhaps, McCarthy and Co. are prepared to ride the hot hand through the final two weeks of the regular season.