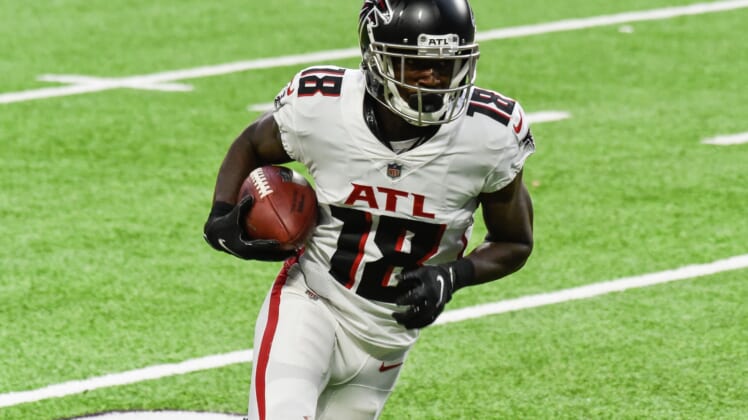 NFL injury report: As another week of the season draws to a close, the NFL injury report grew with more fantasy stars after Sunday’s action. With Week 9 just around the corner, household names like Ezekiel Elliott, Christian McCaffrey and Calvin Ridley are all at dealing with significant injuries.

Sunday’s games proved to be especially rough on the offensive side and not just for skill players. The Baltimore Ravens lost All-Pro tackle Ronnie Stanley to a season-ending ankle injury, a massive blow for the entire offense. With several fantasy stars already sidelined in Week 8, like Aaron Jones and Michael Thomas, even more names joined them with significant injuries.

McCaffrey exited Week 2 with a high-ankle sprain, which the Panthers hoped would sideline him around six weeks. However, Carolina exercised caution with its All-Pro running back and kept him out for Week 8 against the Atlanta Falcons. Fortunately, the additional week to rest made a difference.

McCaffrey returned to practice this week and ESPN’s David Newton reported that the all-purpose running back looked explosive and displayed great burst. It’s those little things that the Panthers wanted to see, their star moving at full speed, that were needed for him to come off injured reserve.

McCaffrey is now off injured reserve and will make his return by starting Sunday’s game against the Kansas City Chiefs. He instantly needs to be plugged back into fantasy lineups. The consensus No. 1 pick in fantasy football drafts, he is a league-winning piece of lineups.

We might not see him handle a full workload, but he is a safe bet for 18-plus touches against the Chiefs. NFL Network’s Ian Rapoport shared Sunday morning that he could see an Alvin Kamara-like role today. Given his incredible pass-catching skills, he won’t be in danger of losing touches if the Panthers fall behind early. McCaffrey is a top-five running back in Week 9. As for Mike Davis, he can’t be started with McCaffrey back. However, he is worth holding onto as a handcuff.

Labeled a breakout fantasy star before the season, many hoped Drake would be an RB1 as a dangerous all-purpose back. Instead, he has been a massive disappointment outside of a at a 164-yard performance in Week 7.

Just when he started to gain momentum, he is now injured. Drake was carted off with an ankle injury late in Week 8 against the Seattle Seahawks. According to ESPN’s Adam Schefter, an MRI diagnosed him with a slight ligament tear in his ankle and he will miss a few weeks. Fortunately, Kliff Kingsbury shared Monday that it might be just a one-game absence.

Chase Edmonds has vastly outperformed Drake this season, both in yards per carry (6.1, 4.3) and yards per catch (8.5, 4.1). With two weeks to prepare for the Miami Dolphins, we’re expecting big things from Edmonds. Even with Drake making a faster recovery than expected, his absence from practice made his game status clear. On Friday, the Cardinals ruled Drake out for Week 9.

Expect Kliff Kingsbury to feed Edmonds 15-plus times in this matchup. He’s a lock for at least five receptions, with the ability to turn any of those grabs into a big play. Throw in another 10 carries on the ground and you’ve got the upside for 80-plus scrimmage yards and a score.

Elliott hurt his hamstring in Week 8, but the Cowboys and fantasy managers remained optimistic that he would suit up against the Pittsburgh Steelers. Unfortunately for Dallas, with the season headed in the wrong direction, Elliott might be inactive for Week 9.

According to NFL Network’s Ian Rapoport, Elliott has a good chance to play on Sunday against the Steelers. While there was pessimism on Saturday morning, he impressed in a workout and there is new optimism. Dallas will test him out before the game to be sure he can play.

If Elliott is inactive, Pollard becomes an RB2 in PPR leagues. While Dallas will certainly suffer a double-digit loss to the Steelers, an unfavorable script for a running back, his ability to catch the ball out of the backfield is key. Expect Pollard to get 15-plus touches, assuming Elliott can’t play.

Calvin Ridley has dealt with his share of injuries this season and enters Week 9 on the NFL injury report. Atlanta’s No. 2 receiver went down on Thursday Night Football with a mid-foot sprain.

According to NFL Network’s Ian Rapoport, an MRI determined that Ridley avoided a serious injury and the team considers him day-to-day. On Sunday morning, the Falcons officially ruled Ridley out by putting him on their inactive list.

Ridley is an elite fantasy receiver when healthy and while he might be able to fight through this foot injury, it seems unlikely. With Ridley inactive, Gage becomes an intriguing play with four teams on a bye. He has three games this season with 50-plus receiving yards and would be a safe bet for at least five grabs against the Denver Broncos. He isn’t a safe play, but he would offer a decent floor in PPR scoring.

A quiet Sunday for Golladay got worse. He went down with a hip injury in the first half and the Lions ruled him out just minutes into the third quarter. It’s concerning, especially given the nature of the injury.

Sadly, per NFL Network’s Ian Rapoport, Golladay is ruled out for Sunday’s game against Minnesota. The team is calling it a week-to-week injury and the NFL’s receiving touchdown leader in 2019 will undergo further evaluation this week.

Losing Golladay is a blow for Matthew Stafford’s fantasy value, which is poor timing given the matchup. Injuries have ravaged Minnesota’s secondary and it would stand little chance of creating pressure against Detroit’s offensive line.

The biggest beneficiary with Golladay out, Marvin Jones. It’s been an underwhelming year for the veteran, but the talent is undeniable. He would be Stafford’s go-to target in a great matchup, making Jones a top-30 receiver. Keep an eye on Danny Amendola, he could be a mid-tier WR3 in Week 9. We might even see D’Andre Swift get a few more touches, but he is a low-end RB2 because this offense doesn’t recognize his talent.

It’s been a frustrating year for Godwin. He missed Week 2 with a concussion and was then sidelined in Week 4-5 by a hamstring injury. When he found the end zone in Week 7, his first touchdown in nearly a month, he fractured his left index finger and held out for Monday Night Football.

According to ESPN’s Adam Schefter, doctors initially feared Godwin would miss four-to-six weeks. Fortunately, after undergoing surgery and missing one game, he will return to the field for Week 9.

Week 9 will be an important one for fantasy owners. Not only will Godwin return, but Antonio Brown will be making his debut with the Buccaneers. Given he is roommates with Tom Brady, we’re not expecting there to be any chemistry issues between Brady and his newest teammate.

Tampa Bay boasts an elite defense, so we won’t see a ton of shootouts. Beginning in Week 9, none of the trio should be a top-15 play in wide receiver rankings. Evans isn’t seeing the volume to be anything more than a low-upside WR2, Godwin is a mid-tier WR2 and Brown will be a WR3. If one of them misses a game, the remaining duo are must-start plays.

Heading into Week 8, the fantasy football world was overjoyed for Jonathan Taylor and his matchup against the Lions. It would be the perfect opportunity for a monster game against one of the NFL’s worst run defenses. The Colts rushed for 119 yards and two scores on Sunday, but Taylor was a massive disappointment.

We learned why on Monday. Frank Reich informed reporters that Taylor is dealing with an ankle injury, but it wasn’t brought up to the team until after the win. It would explain why he was so ineffective, racking up just 22 yards on 11 carries as Jordan Wilkins ran for 89 yards and a score.

Set to face the Baltimore Ravens in Week 9, this wouldn’t be an ideal matchup for Taylor if he was healthy. The issue was minor and Taylor was a full participant in practice on Thursday. While he seems healthy, the matchup and the limited touches in a committee backfield make Taylor an RB3 for Week 9.

Amid the COVID-19 pandemic, the Chargers experienced a scare late this week when Keenan Allen reported a sore throat and didn’t feel well. It immediately put his availability for Sunday’s game in jeopardy, with the Chargers needing consecutive negative COVID-19 test results to clear him.

Fortunately, per ESPN’s Adam Schefter, Allen tested negative for the coronavirus on Saturday and Sunday morning. He is now cleared to play in Week 9 and while he isn’t feeling 100%, the Pro Bowl receiver will play in a great matchup.

It’s been a brutal year for the 49ers. San Francisco’s season has been defined by injuries every week, losing at least one starter in every game. Right when it looked like George Kittle and Jimmy Garoppolo might be healthy, they suffered setbacks in Week 9.

Garoppolo never looked right against the Seattle Seahawks and after a brutal performance, he limped to the locker room. Now, per ESPN’s Adam Schefter, Garoppolo is out indefinitely with renewed issues from the high-ankle sprain.

On top of that, as first reported by NFL Network’s Ian Rapoport, Kittle was diagnosed with a small fracture in his foot. The All-Pro tight end is expected to miss eight weeks, according to ESPN.

If the 49ers needed a reminder of how to attack Green Bay, Dalvin Cook provided it. The same defense that allowed Raheem Mostert to run for 220 yards and four scores in the NFC Championship Game, will take the field on short rest in Week 9 with the same players.

San Francisco will run the Packers into the ground, so fantasy owners will start whichever running back is healthy. Tevin Coleman briefly shined in Week 8, but left with a knee injury. If he can’t go, JaMycal Hasty will be an RB2 in Week 9. We’d advise staying away from Nick Mullens, just based on the likelihood he doesn’t attempt a ton of passes.

For fantasy owners, the eight-week timetable rules Kittle out for the rest of the fantasy season. He will go on injured reserve and might not play again in 2020. San Francisco can only hope Jordan Reed can come off IR soon, but a return for Week 9 seems unlikely.

Before Sunday’s action, ESPN’s Schefter reported the Saints anticipate Sanders being on the field in Week 9 against the Tampa Bay Buccaneers. He missed two games after testing positive for COVID-19, but is recovering nicely and should receive clearance to play on Sunday Night Football.

He won’t be the only receiver back for New Orleans. Michael Thomas, who last played in Week 1, is finally expected to return. He was a limited participant in practice throughout the week with a hamstring issue, but ESPN indicates the team expects him to play. A matchup against Tampa Bay’s secondary is tough, but Thomas is a must-start receiver when healthy.

As for Drew Brees, who suffered a right shoulder injury, New Orleans anticipates its star quarterback playing. Count on him throwing a lot of passes to Thomas and Kamara, which should sustain some fantasy value. With that said, Brees isn’t a top-10 quarterback play for Week 9.

Heading into the bye week, we learned that Minshew is dealing with multiple fractures and a strained ligament in his right thumb. The second-year quarterback tried to play through the injury, likely because his job is on the line, and it seemed to impact his play.

Unsurprisingly, the Jaguars have already announced Minshew won’t play Sunday against the Houston Texans. In his absence, 2020 sixth-round pick Jake Luton will likely slide in as the starting quarterback. While he is unproven, he can’t be any worse at throwing the ball to D.J. Chark and Laviska Shenault. Given Houston’s secondary has allowed 1,762 passing yards with a 17/1 TD/INT ratio this season, start both receivers with confidence in the FLEX. In fact, Luton might be a sneaky DFS play for Week 9.