Antonio Brown will live with Tom Brady this season? 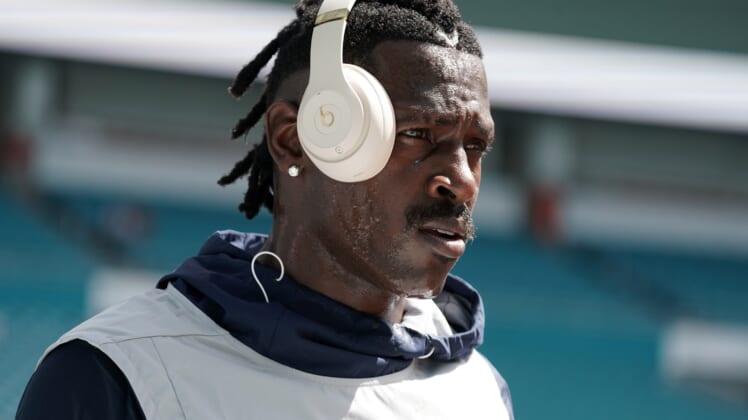 Antonio Brown signed with the Tampa Bay Buccaneers thanks to some convincing from Tom Brady. Now, with Tampa Bay’s coaching staff keeping the All-Pro receiver on watch, Brady and Brown could be roommates for the rest of the season.

The Buccaneers took a chance on Brown, signing him toward the end of an eight-game suspension for violating the NFL’s personal conduct policy. Given his history of off-field issues, including an ongoing sexual assault trial, Brady will be stepping up as Brown’s shadow off the football field.

Tom Brady vouched for Antonio Brown, will live with him

According to CBS Sports’ Jason La Canfora, Brady personally vouched for Brown to Tampa Bay’s coaching staff and played a huge role in convincing them to sign him. Not only is the future Hall of Fame quarterback going to be at Brown’s side to make sure he follows the rules, but they will also be living together for part of the season.

Brady’s relationship with Brown, dating back from their very short time together with the New England Patriots, had to do a lot of selling. Specifically, he needed to convince head coach Bruce Arians. Given Tampa Bay’s coach called out the All-Pro receiver for being too much of a diva for the team and publicly ruled out adding him to the roster this summer, Brady kept pushing.

“Brady told them he is going to make sure this is not a problem,” a source said, via CBS Sports. “He guaranteed BA (coach Bruce Arians) that he would make sure this guy did everything he has to do, even if Brady has to drive him there himself. These two are going to be joined at the hip. And they made it clear to Brady that Brown is on a very short leash. If he (slips up), he’s gone.”

Even if Brown doesn’t slip up again, practicing the kind of discipline and team-first approach we haven’t seen in years, there’s still a chance he could be cut before the playoffs.

While his eight-game suspension ends after Week 8, clearing the way for a debut in Week 9 against the New Orleans Saints, another ban could be coming.

The NFL is still conducting its investigation into accusations from Brown’s former trainer Britney Taylor. She accused him of sexual misconduct and when the two sides were close to settling the case in July, Brown backed out for the second time.

The case goes to trial in December and evidence from the discovery process will be presented in a matter of weeks. If there is compelling information against Brown, the Buccaneers reportedly won’t hesitate to release him and he might receive another suspension.

For now, Brown is set to take the field in Week 9. He will add to an electrifying offense, with the NFL’s best receiving corps and Brady playing at an MVP-caliber level. On top of that, the Buccaneers boast one of the NFL’s best defenses.

All of the pieces are in place for Brady and the Buccaneers to make a run at Super Bowl LV, which will be played in Tampa Bay. Given the unpredictability of this season and the drama that can follow a team after signing Brown, nothing is guaranteed.