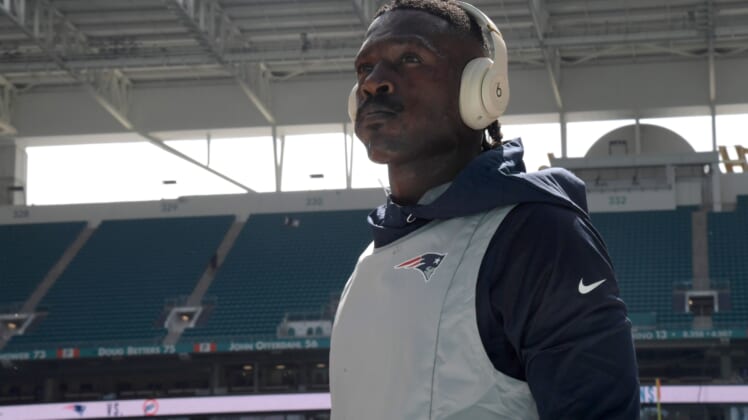 The NFL has reportedly come down hard on NFL free agent receiver Antonio Brown, hitting him with a lengthy suspension.

According to Robert Klemko of the Washington Post, the NFL is suspending Brown for half a season — eight games. He’s being suspended for violating the league’s personal conduct policy, and the suspension will start whenever he signs a contract.

Shortly afterward, the report was confirmed by the NFL.

The reason Brown is being suspended for violating the personal conduct policy is that he has been involved in multiple off-field incidents.

He’s been accused of sexual misconduct by two separate women and was caught harassing the second on social media. Brown also recently pleaded “no contest” to assault charges from an incident with a truck driver at his Florida home in January.

For these reasons, Brown will have to sit out half a season — assuming he’s signed at all.

The second part is no gimme. In addition to his off-field issues, Brown also has a history of poor behavior while on NFL rosters.

He reportedly abandoned the Pittsburgh Steelers three times during the 2018 season — resulting in the team offloading him at a huge cost to the franchise.

Brown also completely blew his chance with the then Oakland Raiders. He had a string of troubling incidents during training camp last summer before the Raiders finally gave up on him. Then, he lasted just one game with the New England Patriots before his off-field troubles forced them to release the star receiver.

Antonio Brown’s stats will entice teams to take a gamble

The reason teams would still have interest in Brown despite his off-field issues, is that he’s tremendously gifted. In fact, you could easily make the case that he was the NFL’s top receiver before the tail end of the 2018 season.

In 10 career seasons, nine spent with the Pittsburgh Steelers, the former sixth-round pick out of Central Michigan has put up jaw-dropping stats. Hauling in 841 receptions for 11,263 yards with 75 touchdowns, he’s absolutely electric.

So that’s why Brown could draw interest. Despite the headaches, he has all-world talent. And teams contending for a Super Bowl in October and November may be willing to take a gamble on catching lighting in a bottle.

On that note, there is one team in particular that appears to be intrigued by the notion of signing him this year. Unless, of course, he actually does retire like he’s been threatening to do.