NFL rumors: Gardner Minshew could be benched in Week 7? 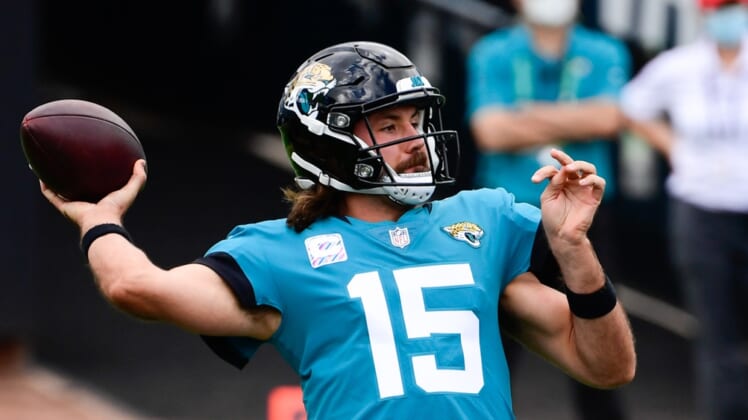 Jacksonville Jaguars quarterback Gardner Minshew will take the field on Sunday as the starter, but Minshew Mania could end abruptly in Week 7 with a benching.

Minshew, a sixth-round pick in the 2019 NFL Draft, took the league by storm in his rookie season. A year later, with the Jaguars in a race for the No. 1 overall pick, he could be headed for the bench.

According to NFL Network’s Ian Rapoport, Minshew is in danger of losing his starting job if his struggles continue on Sunday against the Los Angeles Chargers. If he continues to perform poorly, the Jaguars are ready to pull the plug on Minshew Mania.

From the outside, this certainly may seem like a baffling move. Not only is Minshew a cult hero in Jacksonville and one of the reason reasons fans watch the team, but his 2020 stats are even better than last season.

However, things are starting to spiral out of control for Jacksonville’s offense. After beating the Indianapolis Colts in Week 1 and then narrowly losing to the Tennessee Titans in Week 2, things have gone downhill.

Minshew had an atrocious performance in Week 6 against the Detroit Lions, completing just 25-of-44 attempts with one interception and an awful 5.5 yards per pass attempt. On top of that, six of Minshew’s touchdowns have come in the fourth quarter this season, when the Jaguars are trying to erase massive deficits in garbage time. Sitting at 1-5, change is now on the table.

There was once hope that Minshew could be the long-term solution at quarterback for the Jaguars. While he certainly isn’t being helped by his supporting cast, it’s evident this season that Minshew’s ceiling as an NFL quarterback is limited.

Mike Glennon isn’t the answer, but moving to the backup quarterback might accelerate Jacksonville’s push towards a top-three pick in the 2021 NFL Draft.

Given that would mean a chance to draft Trevor Lawrence or Justin Fields, elite talents at the quarterback position, might be the incentive the Jaguars need to bench Minshew.