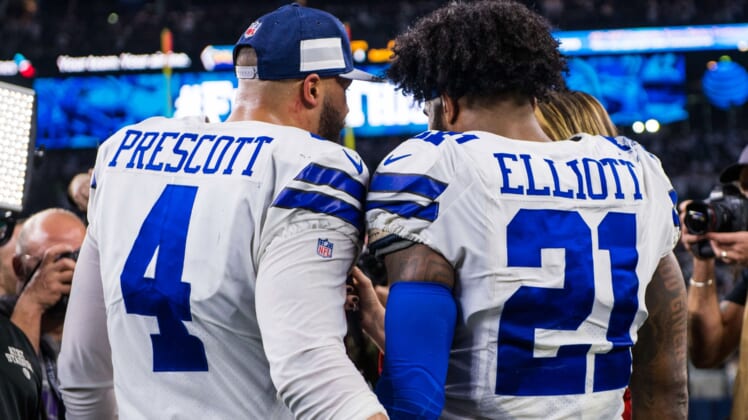 It was never a financial security thing for the Dallas Cowboys. Owner Jerry Jones has the cash to spend with the best of them. The Ezekiel Elliott contract negotiations and subsequent holdout magnified this.

Like all 32 NFL teams, Dallas is operating under a hard cap. The team needs to look out for its long-term cap flexibility.

This came to somewhat of an abrupt halt early Wednesday morning with news breaking that the Cowboys have signed Ezekiel Elliott to a five-year, $90 million extension with $50 million in total guarantees.

Elliott immediately takes over as the highest-paid running back in NFL history. Take into account the fact that he has two years remaining on his deal, and the Pro Bowl back will earn a cool $103 million over the next eight seasons.

It’s just a latest in a Cowboys spending spree that has spanned the past six months. In total, Dallas has doled out $313 million to retain its core pieces. That’s before Dak Prescott and Amari Cooper have even been locked up long-term.

That’s $313 million in cold-hard cash doled out to four players at positions other than quarterback. The total guarantees within these deals are also mind-boggling. They add up to $185-plus million.

While Dallas has waited to an extent to sign its triplets to long-term deals, it did get below-market contracts done with Lawrence and Smith. Those were smart moves in an NFL market that continues to see record-breaking contracts inked at a near never-ending loop.

Though, we’re going to see a lot more money spent from the Cowboys’ brass here in relatively short order.

Dak Prescott: The quarterback is said to be demanding $35 million annually on a new deal. There’s absolutely no reason to believe Prescott won’t get it.

Amari Cooper: While this receiver is unlikely to reset the market at his position, he’s looking at a payday within the average of the top five pass catchers in today’s NFL.

Should the Cowboys find a way to sign both Prescott and Cooper to extensions ahead of Week 1 or some time shortly after, the team would be looking at doling out roughly a half billion in total cash to six core pieces this year alone.

It’s the cost of retaining a potential championship core in an NFL that has seen the market expand a great deal in recent years. In no way does that make the overall figures any less eye opening.