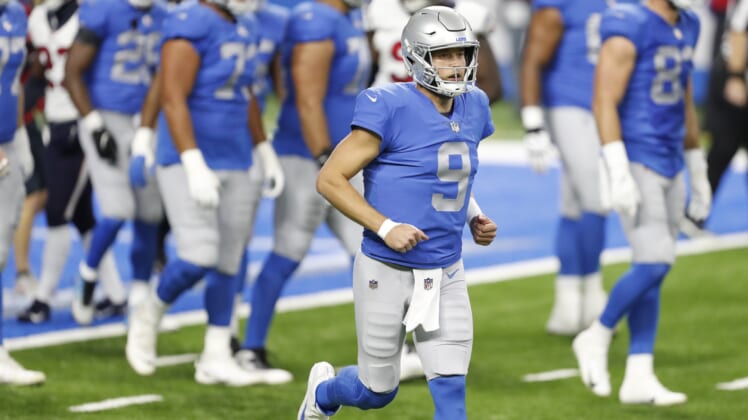 It’s inevitable that a Matthew Stafford trade from the Detroit Lions will happen after he and the team mutually agreed to part ways this offseason. The questions now revolve around where Stafford will end up, and how soon he will be dealt.

ESPN insider Adam Schefter told Sportsnaut that he believes Stafford will be the first QB domino to fall in what could be a truly wild carousel of signal-callers changing jerseys in 2021.

Let’s get down to business and examine the five likeliest Matthew Stafford trade scenarios.

This easily makes the most sense, because the Colts have a gaping hole at quarterback in the wake of Philip Rivers’ retirement, and have plenty of cap space to spend on Stafford. Indianapolis boasts an appealing roster built by a strong general manager in Chris Ballard. Head coach Frank Reich is in lockstep with Ballard in terms of organizational vision.

There’s plenty of time between now and the 2021 NFL season kickoff for Ballard to make further personnel improvements through free agency and the draft even after Stafford would join the fold.

As it stands, the offensive line led by Quenton Nelson is stout. Michael Pittman Jr. and Parris Campbell present a promising young receiver tandem. Nyheim Hines and Jonathan Taylor are a dynamic 1-2 backfield punch. Defensive coordinator Matt Eberflus is returning next season. All the pieces are in place for Stafford to lift the Colts to an AFC South title in his first year with the team.

The 49ers got ravaged by injuries this past season and missed the playoffs. They do have a dependable leader in Jimmy Garoppolo when he’s on the field. The problem is, he’s missed 23 of a possible 32 games over two of his three seasons as a full-time starter.

Stafford is a much more durable player than Jimmy G, not to mention a more consistent passer with better deep-ball accuracy. San Francisco head coach Kyle Shanahan has never had a thrower of Stafford’s caliber in his entire NFL coaching career, and it seems like a match made in football heaven.

Parting with the 12th overall pick in the 2021 NFL Draft would probably be too steep of a price for the Niners, but they could fork over a couple second-rounders, or their 2022 No. 1 pick to pry Stafford from Detroit. They could even feature Garoppolo as a piece of a prospective deal.

Two words. Dak Prescott. While Dallas has said everything right publicly relating to the injured quarterback, it’s not yet known whether a long-term commitment is coming. After Prescott suffered that devastating ankle injury back in Week 5, reports surfaced that Dallas could place the franchise tag on him again. Given the split between these two this past offseason, I am not too sure how that would sit with Prescott.

What I do know is that Dallas is not going to sit back and rely on someone like Andy Dalton under center moving forward. Owner Jerry Jones is too proud. And after what we’ve seen this season, Jones is going to do everything possible to make this organization relevant again. If that means trading Prescott or letting him walk and making a move for Stafford, so be it. Stafford sure would like throwing to the likes of Amari Cooper, CeeDee Lamb and Michael Gallup.

Read More: Who’s going to be the Dallas Cowboys quarterback in 2021?

Former NFL MVP Cam Newton had something of a trial run in 2020. He signed a prove-it, one-year deal late in the offseason and didn’t play well enough to return to the Patriots in 2021. While Newton ran the ball effectively and scored 12 touchdowns, he was wildly inconsistent tossing the rock to a less-than-stellar group of pass-catchers. The veteran threw only eight TDs compared to 10 interceptions in 15 starts. That’s not going to cut it.

It’s in this that a Matthew Stafford trade to the Patriots makes a ton of sense. Head coach Bill Belichick is likely looking at a more traditional quarterback after seeing Tom Brady hold down the fort for the past two decades prior to 2020. At 68 years old, it’s also a belief that Belichick isn’t looking to go with a young quarterback.

It’s not a secret that head coach Jon Gruden and quarterback Derek Carr have had somewhat of a divisive relationship since the former began his second tenure with the Raiders back in 2018. While Carr played pretty well for the 8-8 Raiders this season, there’s every reason to believe Gruden will be looking for an upgrade under center in Las Vegas.

Statistically, Carr has been on par with Stafford over the past several seasons. However, he continues to struggle throwing the ball down the field. It’s something Gruden fancies in his offense and has made Carr an odd fit under the head coach. A Matthew Stafford trade would definitely make sense for these Raiders due to his superior arm talent.