Indianapolis Colts quarterback Philip Rivers has officially announced his retirement, and plenty of people in the NFL world are celebrating his career. 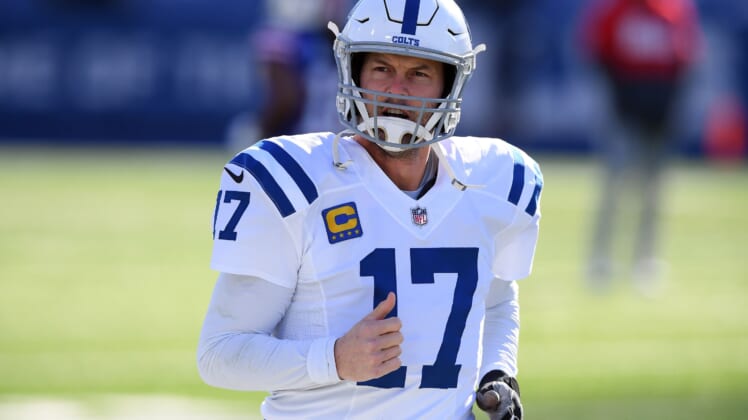 After 17 seasons in the NFL, veteran quarterback Philip Rivers, who guided the Indianapolis Colts to an AFC playoff berth, officially called it a career on Wednesday.

Rivers spent his previous 16 years in pro football as the long-tenured signal-caller for the Los Angeles Chargers. At age 39, he evidently saw now as the proper time to hang up his cleats.

Kevin Acee of The San Diego Union-Tribune broke the news of Rivers’ retirement, which comes as somewhat of a surprise despite his advanced age, considering the signal-caller had a resurgent 2020 campaign in reuniting with Colts coach Frank Reich. The Colts’ season ended on Super Wild Card Weekend in a tight, 27-24 loss to the Buffalo Bills.

Here’s some of what Rivers had to say late Tuesday night from his home for Wednesday’ report about why retirement was the right choice for him, and what he plans to do next:

“It’s just time. […] I can sit here and say, ‘I can still throw it. I love to play,’ but that’s always going to be there. […] What has helped me come to this (decision) is the growing desire to coach high school football. That’s what I’ve always wanted to do. It’s been growing. I can’t wait.

[…] This is the first year I felt like the ending was real. We talked about it other years, but we knew we weren’t doing it. This year felt different…It just seemed right.”

– Philip Rivers on retiring from the NFL

Rivers also released a statement to ESPN, per Adam Schefter:

As the fourth overall pick in the 2004 NFL Draft, Rivers was involved in a draft day trade where the Chargers swapped quarterbacks, sending Eli Manning to the New York Giants.

Although Manning won two Super Bowls in New York, it says a lot that Rivers was able to beat out another reported, imminent NFL retiree in Drew Brees to be the Bolts’ long-term answer at the quarterback spot.

Rivers is currently fifth on the all-time passing yards list with 63,440, as well as touchdown passes (421). He began his time as a starter in 2006, and proceeded to make 240 consecutive regular-season starts, which is a testament to his toughness and sustained level of greatness.

The only thing that’s really missing from Rivers’ resume is a championship, as he compiled a 5-7 playoff record and reached a conference title game only once. However, Rivers should be a Hall of Famer at some point, if not a first-ballot selection, due to his prolific accomplishments and longevity.