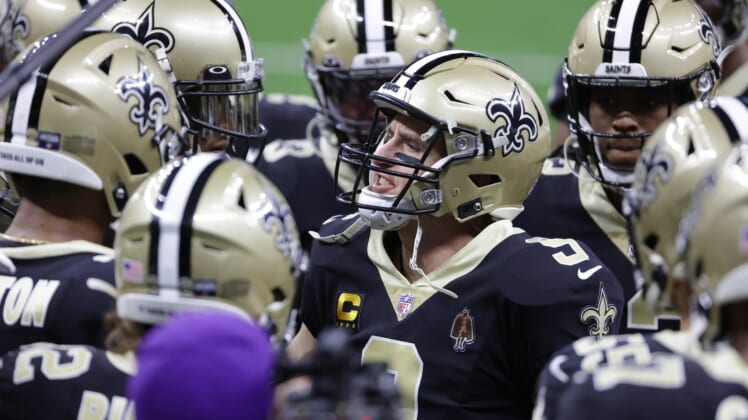 NFL rumors have pointed in the direction of all-time great New Orleans Saints quarterback Drew Brees retiring after the ongoing NFL Playoffs come to a conclusion for his team.

Brees, 42 has dealt with injuries in each of the past two seasons after remaining relatively healthy throughout the first 18 years of his career. With it has come some regression on the part of the future first ballot Hall of Famer.

Now comes this piece of information surrounding the 13-time Pro Bowler. It is to be expected.

Reports note that Drew Brees will retire after NFL Playoffs

“Drew Brees, tonight will be the last game he plays at the Superdome,” Fox Sports NFL insider Jay Glazer reported ahead of the Saints’ playoff game against Tampa Bay on Sunday. “And whenever his last game is, if they lose tonight, if they lose next week, that will be the last game he plays in the NFL. Drew Brees will be done. That’s it. Tom Brady will continue. Drew Brees, this will be his last game in the Superdome.”

If Brees’ Saints were to fall to Tom Brady and the Tampa Bay Buccaneers in the NFC Divisional Playoffs, it would be the end of his NFL career. At the very least, this is Brees’ final home game in New Orleans. That’s guaranteed after the top-seeded Green Bay Packers defeated the Los Angeles Rams on Saturday.

If this is indeed the end of the line for Drew Brees, it has been an absolutely remarkable career for the former San Diego Chargers second-round pick.

Brees tops the all-time NFL list with 80,358 career regular-season passing yards. He’s also No. 2 on the all-time list in passing touchdowns with 571, behind only Tom Brady.

This past regular season saw Brees throw for 2,942 yards with 24 touchdowns against six interceptions in 12 games. He missed four games to injury.

If we’re going to take Glazer at his word, this means the Saints will be looking for another quarterback during the offseason. Backup Taysom Hill could be a possibility after signing an extension ahead of the 2020 season.

Impending free agent Jameis Winston could also be a possibility. However, there’s a good chance that he will change teams once March comes calling.

This means that it’s a pretty decent bet head coach Sean Payton and Co. will be looking outside of the organization for a quarterback to lead them in the post-Brees era.

The likes of Carson Wentz (Philadelphia Eagles) and Matthew Stafford ( Detroit Lions) could be on the trade block. As you likely already know, NFL rumors also suggest that star Texans quarterback Deshaun Watson wants out of dodge.

Related: Top NFL quarterbacks who could change teams during offseason

The Saints will remain a Super Bowl contender once Brees retires. That’s a clear indication New Orleans is going to be looking for a veteran quarterback to replace the all-time great.

For now, New Orleans is looking to keep this playoff run going and help lead Brees to his second Super Bowl title. After that, all the talk in the Bayou will be about the all-important quarterback position.