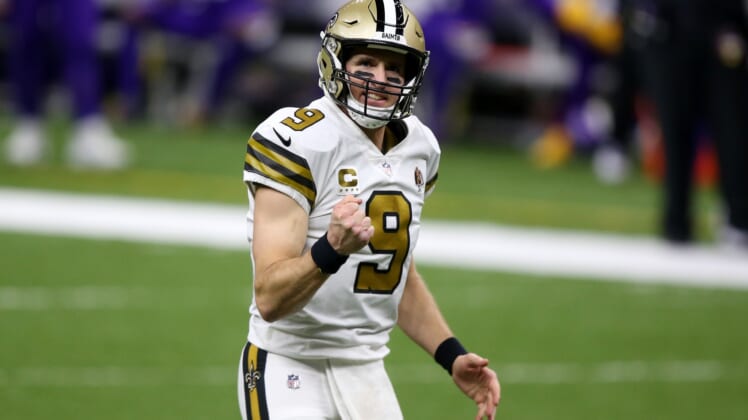 Drew Brees will go down as one of the greatest quarterbacks in NFL history, especially if the New Orleans Saints quarterback can pull off another Super Bowl victory. But while plenty of focus remains on the upcoming NFL Playoffs, the future of for eventual first-ballot Hall of Famer is uncertain.

Much like we saw with Brett Favre a few years ago, Brees has been at the center of retirement rumors in recent seasons. As the 41-year-old quarterback prepares to put the finishing touches on his 20th regular season in the NFL, speculation is swirling about his plans for 2021.

Here’s the latest on whether Drew Brees will retire or return to the NFL in 2021.

Drew Brees almost didn’t play in the 2020 NFL season. In September, ESPN’s Adam Schefter reported that Brees told his teammates in February that he planned to retire.

Brees started taking meetings with television network executives, planning his second career after football. As he weighed his future in the NFL, an emotionally-challenging process, the 41-year-old eventually settled on his future home.

Shortly after Brees announced his return for the 2020 season, he signed a contract with NBC. Upon his retirement, Brees will serve as a game analyst for NBC’s Notre Dame football broadcasts. He would also work as a studio analyst on Football Night in America. Brees will reportedly be groomed to become the successor for Cris Collinsworth on Sunday Night Football.

During the summer, with Brees back as the starter, New Orleans Saints head coach Sean Payton indicated the 2020 season would be Brees’ final season. He later walked those comments back, but his initial belief and the contract with NBC were strong indications Brees would retire in 2021.

ESPN’s Adam Schefter later provided even more insight into the situation, including Brees’ immediate plans after he hangs up his cleats.

Entering the NFL Playoffs as the No. 2 seed, the Saints will hope to go a lot further than they have in recent years. New Orleans hosts the Chicago Bears in the Wild-Card round on Sunday afternoon. While the Saints would host a Divisional Round game, the NFC’s road to Super Bowl LV goes through Green Bay.

The team will certainly be playing for Brees in the playoffs, with the desire to help him win a second Super Bowl ring before he retires.

If the 2020 season proves to be the last ride for Drew Brees, he will retire with an incredible career resume. Across 20 seasons since coming into the league as a second-round pick in the 2001 NFL Draft, this 6-foot quarterback has towered over expectations and his draft status.

Brees already brought a championship to New Orleans, leading the team in Super Bowl XLIV and winning Super Bowl MVP honors. While he’d love to add another Lombardi Trophy to this team’s great history, his accomplishments already make him a Hall of Famer.

Brees was named the Walter Payton NFL Man of the year in 2006, won Comeback Player of the Year in 2004 and has become a beloved icon in Louisiana.

Injuries have started to take a toll on him, as we’ve seen in his age-41 season. He missed four starts this season with 11 fractured ribs and his arm strength and velocity has taken a significant step back.

Coming into 2020, the Saints viewed Taysom Hill as their quarterback of the future and Payton’s confidence in him has skyrocketed thanks to his four-game stretch as the starter. If Brees retires, though, there is expected to be significant competition at quarterback in 2021.