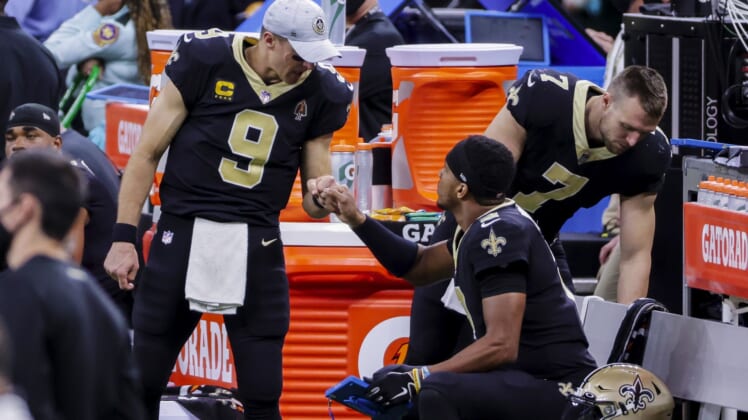 Drew Brees is headed for retirement, creating plenty of uncertainty around the New Orleans Saints quarterback position for 2021 and beyond. Heading into an offseason where the tam is $100 million over the salary cap, the quality of options to replace the future Hall of Famer will be limited. However, thanks to head coach Sean Payton, the opportunity exists for a passer to thrive.

New Orleans would love to swing a blockbuster trade for Deshaun Watson, who is forcing his way out of Houston. With that said, this team doesn’t have the financial room to absorb Watson’s contract nor the draft capital to acquire him. Meanwhile, the Atlanta Falcons won’t trade Matt Ryan within the division. While Detroit Lions star Matthew Stafford could be available, the Saints’ cap situation rules him out.

Ultimately, Payton will need to find a cheaper and more volatile quarterback. While that is a downgrade in many ways, after years of Brees executing this offense to perfection, change can be a good thing. If New Orleans hits on the right quarterback, things could go better than expected in 2021.

New Orleans Saints quarterback: Who will be Saints QB in 2021?

Even before the 2020 NFL season began, speculation surrounded who would be the heir to Drew Brees’ throne in New Orleans. The Saints looked into the 2020 NFL Draft class for quarterbacks but never fell in love with a passer. Ultimately, they signed Jameis Winston and rewarded Taysom Hill with a lucrative two-year contract.

The moves showed a glimpse of who might be the New Orleans Saints quarterback in 2021.

While Payton has always been high on Hill’s skills, the appreciation became more evident this year. Not only did New Orleans make Hill the highest-paid backup quarterback in the NFL, but tons of praise came out regarding this gadget player.

In May, word first broke that Hill could be “the guy” in New Orleans after the 2020 season. Payton planned to use him in an expanded role this year, recognizing the improvements he seemingly showed in practice as a passer. When Brees went down and many wanted Winston to start, including some Saints’ players, Payton gave Hill the gig.

Overall, the move worked out for New Orleans. The team went 3-1 during that stretch, even dropping a 30-burger on the Denver Broncos. However, it was largely being carried by a stellar defense and Hill entirely doing damage on the ground.

On the surface, the numbers are impressive. With that said, two of his 200-yard showings came against a porous Falcons’ defense. It’s also worth noting, per Pro Football Focus, that Hill ranked 25th in quarterback rating (60.4) when pressured.

Defenses make adjustments and that started to happen as time went on. Hill’s presence is also negating some of the things Alvin Kamara does best, just months after New Orleans signed him to a huge contract.

While Kamara is slightly more effective running the football, the staggering drop in his pass-game usage is impossible to ignore. The New Orleans Saints quarterback must recognize he has an All-Pro talent in the open space and getting him the football is crucial. Otherwise, the Saints are wasting precious cap.

Hill will likely be the favorite to take over as the New Orleans Saints quarterback in 2021, given he is under contract for a $16.1 million cap hit. However, there are significant limitation in the 30-year-old’s game as a passer that should lead Payton to explore other options.

While Winston only signed a one-year deal with New Orleans, this could be his home for the future. Payton raved about the 26-year-old quarterback. The Saints offered Winston an opportunity to revitalize his career and that can still happen.

Payton recently said on the “Huddle & Flow” podcast that Winston would have an opportunity to start in 2021 when Brees retires. It not only indicates that the Saints want to re-sign him, but Winston will have a legitimate shot at winning the gig.

The former No. 1 overall pick has been volatile as a quarterback. With that said, his numbers show a quarterback who could be great with the right coaching.

New Orleans would provide Winston with better pass protection than he had with the Buccaneers. For a quarterback who had the eighth-most money throws in 2019, this could lead to more success. Even more importantly, as we’ve seen in Brees’ decline and with Hill, Sean Payton can tailor an offense to best help his quarterback succeed.

Winston is a better quarterback than Hill. With a year in the system, for a team with cap issues, Jameis Winston might make the most sense to be the New Orleans Saints quarterback.

The New York Jets will be moving on from Sam Darnold in 2021. With the former No. 3 pick of the 2018 NFL Draft available for trade, smart teams will eye him as a reclamation project.

Darnold never received much help in New York. Adam Gase proved hurt the young quarterback’s development, seemingly stagnating his potential. To make matters worse, Darnold has played behind one of the NFL’s worst offensive lines with a poor cast of receivers since he arrived in the NFL.

Darnold is under contract for the 2021 NFL season with a $9.79 million cap hit and there is the fifth-year option for the 2022 season. Given he just turned 23 this summer, there is still a lot of time for the former USC star to turn things around.

Life would be a lot easier in New Orleans. Having Thomas, Kamara and Jared Cook would give him the caliber of weapons that he has never experienced in his NFL career. Put that offensive line in front of him and suddenly, he doesn’t have to panic from constant pressure. The icing on the cake, he will learn from one of the NFL’s brightest minds.

In terms of long-term upside, Darnold is the best choice for the Saints. If Payton can unlock his potential, the Saints could have a new franchise quarterback. While it might cost New Orleans a Day 2 pick to acquire him, that’s worth the gamble.

In a dream world, the Saints could get bold and swing a huge deal to move up in the 2021 NFL Draft. Unfortunately, with no third-round pick, pulling off such a move would require a ton of draft capital. Taking Justin Fields, Zach Wilson and Trey Lance out of consideration, one clear name remains.

Mac Jones isn’t a special player, he lacks an elite physical trait. This isn’t a quarterback who can launch 60-plus yard throws with regularity, but Alabama did ask him to let it loose more than we saw with Tua Tagovailoa. Jones does handle pressure well and is advanced, given his experience, with the ability to make decisions quickly.

Payton designed an offense in recent years to account for a quarterback who could make quick reads and relied on short throws, we saw that every game with Drew Brees. Michael Thomas thrives at getting open on slants and creating separation early, while Kamara is one of the best in the NFL at making plays out of the backfield. Plus, Jones can be trusted a lot more than Brees on vertical throws.

Landing him might require jumping up a few spots, but trading from No. 28 to No. 22 overall is a lot cheaper than the cost of snagging a top-10 pick. While Jones’s ceiling isn’t high, the pieces around him in this spot would be great. He’s certainly not the worst option to become the New Orleans Saints quarterback.