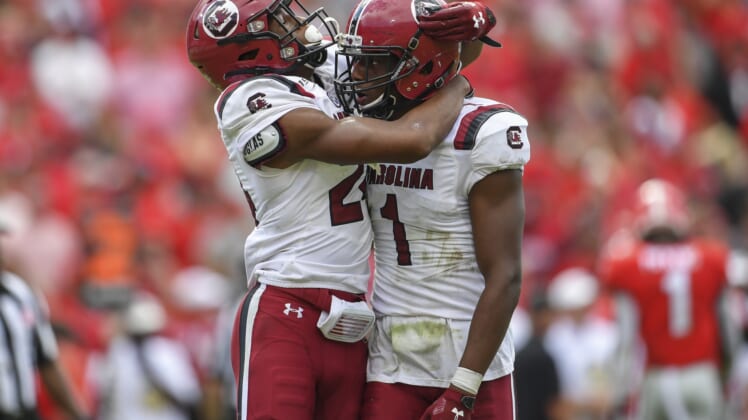 The Las Vegas Raiders draft picks in 2021 amount to six this coming April. That should be enough for head coach Jon Gruden and general manager Mike Mayock to improve a roster that finished 8-8 this past season.

Obviously, the Raiders’ focus here should be on the defensive side of the ball under new coordinator Gus Bradley. They yielded a whopping 29.9 points per game a season ago and need help at all three levels.

Boasting a pretty decent skill-position group, Las Vegas must also attack the offensive line on that side of the ball. Both Trent Brown and Gabe Jackson could end up being salary cap casualties, creating issues at tackle and guard.

Below, the Las Vegas Raiders draft picks in 2021 and who they should target with their first three picks come April.

The most-likely focus for Las Vegas in the first round of April’s draft will be on the defensive side of the ball. These Raiders gave up 29.9 points per game a season ago, acting as the primary reason they missed out on the playoffs with an 8-8 record.

Even after selecting Damon Arnette in the first round of the 2020 NFL Draft and with Trayvon Mullen on the roster, Las Vegas could circle back around to corner if Horn is on the board. The 6-foot-1 corner acted as a shutdown cover guy for South Carolina and boasts the frame new defensive coordinator Gus Bradley likes in his corners.

However, edge rush might be a more-pressing need. Maxx Crosby led the team with seven sacks a season ago. Not another Raiders defender recorded more than three quarterback take downs. That’s where Rousseau and Oweh come into play. The former opted out of the 2020 season with Miami (F), but recorded a whopping 19.5 tackles for loss and 15.5 sacks in 2019. Meanwhile, Oweh had five sacks in 2019 before struggling this past season for Penn State.

There’s also a possibility Las Vegas looks for help at tackle. Big-ticket free-agent signing Trent Brown struggled with COVID-19 and other injuries this past season. The Raiders would save $14 million against the cap by releasing him. With Kolton Miller pegged as the Raiders’ left tackle moving forward, Cosmi could come in and play right tackle immediately. The 6-foot-7, 300-pound former Texas star started 34 of 35 games in college and is already seen as a plus-level run blocker.

Obviously, edge rusher becomes a need for the Raiders in Round 2 should they go in different direction with the 17th pick. That’s where Patrick Jones comes into play. The former Pittsburgh star was extremely productive in college, recording 24 tackles for loss and 17.5 sacks over the past two seasons. At 260 pounds, Jones has the frame that Bradley has in the past valued with the Seahawks, Jaguars and Chargers.

A more eye-opening Round 2 pick for the Raiders would be reigning Heisman finalist Mac Jones. Sure he seems to have some physical limitations, but the national champion dominated for Alabama last season. He put up 4,500 passing yards with 41 touchdowns against four interceptions against elite SEC competition. Should Jones fall to the Raiders with the 48th pick, it would be hard for them to pass up on to learn behind Derek Carr for a season or two before taking over the starting role.

Two defenders in that of Moses and Holland could also be targets. Considered a likely first-round pick ahead of the 2020 season, some flaws in Moses’ game at linebacker for the Crimson Tide became apparent this past year. However, he played three different linebacker positions with Alabama and is suited to fill either the WILL or SAM spot in the NFL. As for Holland, he’s a single-high safety the Raiders could very well use next to former first-round pick Johnathan Abram.

Even if the Raiders were to go defense with their first two picks in the 2021 NFL Draft, I could see them easily tripling down in Round 3. That would include going corner on Day 1, edge in the second round and finding a starter-caliber free safety option in Cisco here. Here’s a dude who recorded a whopping 13 interceptions in 24 career college games. The Raiders could use that type of ball-hawking ability in the backfield.

Inside corner also becomes an option with Vincent. Moonlighting as a specialist, the 5-foot-10 defensive back opted out of this past season. However, he did record four interceptions for the eventual national champion LSU Tigers in 2019. If the Raiders were to move off Gabe Jackson and his bloated contract, I wouldn’t be surprised if they targeted Trey Smith. Boasting a wealth of experience, the former Tennessee star could be a play-and-play Day 1 option. Not bad value in Round 3.