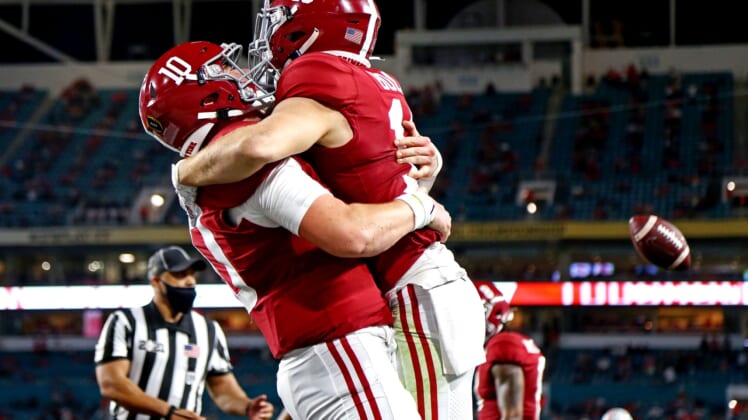 That was the backdrop as the Crimson Tide absolutely blew up Ryan Day and the Buckeyes by the score of 52-24 in the CFB Playoff National Championship Game in Miami.

Led by star quarterback Justin Fields, at least some believed Ohio State had a chance to take out Alabama in this one. Pretty much from the opening kick, that proved to be a foolish belief.

It’s hard to explain just what this reigning Heisman winner did in the first half of Alabama’s blowout win over Ohio State Monday evening. Originally lined up against likely top-round pick Shaun Wade, he made the Buckeyes’ cornerback look like roadkill throughout the game. It got so bad that Ohio State opted to deploy a linebacker against Smith (more on that later).

By the time the first two quarters came to a conclusion, Smith had broken the championship game record with 12 receptions and three touchdowns. He was just shy of the single-game record with 215 yards. These are not typos.

Related: Why Alabama WR DeVonta Smith will be a star in the NFL.

While a hand injury early in the third quarter led to Smith departing the game, he already made a major impact. That included breaking the career receiving yards mark in the SEC. Just think about all the great receivers who have come out of that conference. It now has us thinking he might be a top-10 lock in the 2021 NFL Draft despite a perceived lack of height.

Loser: We’re still not sure what Ohio State DC Kerry Coombs was doing

A veteran defensive mind dating back to his days with the Cincinnati Bearcats, Coombs was lured back to the Buckeyes back in January of 2020 after defensive coordinator Greg Schiano departed to become the Rutgers head coach. This came after two seasons as the defensive backs coach with the Tennessee Titans and three years after he originally departed the Buckeyes.

Unfortunately for the 59-year-old Coombs, he just did not seem up to the task against an Alabama offense that boasts three Heisman finalists. This one play that saw DeVonta Smith score his third touchdown of the first half is a prime example of struggles from the veteran coach.

You could have the greatest cover backer in the history of football on your defense, and you’d still want to avoid putting him on Smith after what we saw earlier in the game. With all due respect to Buckeyes linebacker Tuf Borland, he is not that man.

When the evening finally came to a culmination for Ohio State, Alabama had put up 52 points, 33 first downs and an absurd 621 total yards of offense. We’ll give the Crimson Tide a ton of credit. With that said, the Buckeyes’ scheme on defense left a lot to be desired.

We know the names. Trevor Lawrence, Justin Fields, Zach Wilson and Trey Lance are expected to be the top-four quarterbacks off the board when the 2021 NFL Draft comes calling. Despite starting for just one season at Alabama, Jones wanted to enter that conversation. After all, the 6-foot-3 quarterback did finish in the top three of the Heisman voting this season.

Critics were quick to point to a talent-laden skill-position group with Alabama. That’s fair. However, Jones had shown enough on tape to be considered a top-20 pick heading into the CFB Playoff National Championship. Boy, did Jones answer these critics.

He set a single-game Alabama record with 36 completions on 45 attempts while throwing for 464 yards with five touchdowns against zero interceptions. It was, perhaps, one of the greatest championship game performances for a quarterback in college football history. It also has us wondering whether Jones will, at least, jump Lance come draft day.

After outperforming consensus No. 1 pick Trevor Lawrence in Ohio State’s win over Clemson in the semifinals, talk of Fields dropping down the draft board seemed to be a bit exaggerated. He looked awesome against a stout Tigers defense after some inconsistencies during the regular season.

Unfortunately, that did not translate going up against the Alabama defense. Fields completed a mere 6-of-15 passes for 90 yards in the first half. He struggled with accuracy, missed open receivers and stood in the pocket for far too long. While Field did lead Ohio State to a quick scoring drive in the third quarter to make this game closer, he just couldn’t keep pace with Mac Jones and Co. Whether this impacts his draft stock remains to be seen. It’s also important to note that Fields was dealing with a rib injury he suffered against Clemson. That should be taken into account.

The son of a former NFL Pro Bowler by the same name, Surtain drew rave reviews for his shutdown ability against a weaker Notre Dame offense in the semifinals of the College Football Playoffs. Most who have watched the Irish play know full well how limited Ian Book is from an arm strength perspective. The same thing can’t be said for Ohio State quarterback Justin Fields.

Even then, Surtain Jr. did his best “man on an island” impersonation against the likes of Chris Olave and Co. in the national title Monday night. Olave was held to just two first-half catches before Ohio State was forced to pass the ball in garbage time in the second half. Sure a dropped pick-six impacted Surtain here. That’s fine. He’s still going to be a top-15 pick when all is said and done.

Viewed as a top-10 lock heading into his senior season, Wade struggled to an extent taking over top cover duties from Jeffrey Okudah. It led to some questions about his ability to be a top-end cornerback at the next level. Those questions were not in any way answered during Ohio State’s win over Clemson in the semifinals.

Wade was beaten early and often by DeVonta Smith in this one, leading to the Alabama wide receiver breaking multiple records. He might have shown flashes against lesser receivers in this game. But when going up against top-end NFL-caliber talent, Wade failed to live up to the occasion. It will impact him a ton leading up to the 2021 NFL Draft.