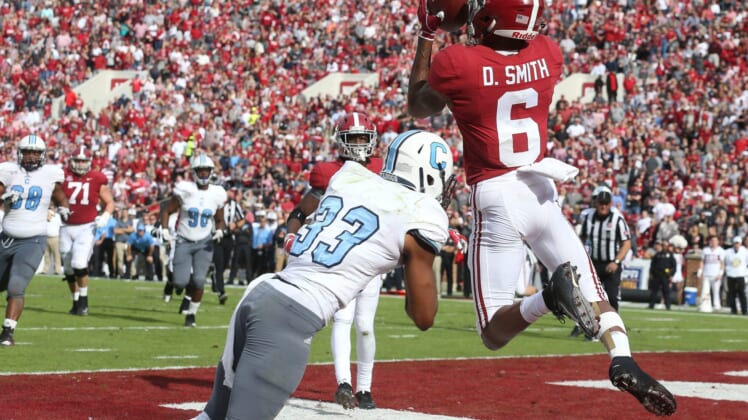 When DeVonta Smith accepted the Heisman Trophy, becoming one of the rare non-quarterbacks to win the prestigious honor, it marked a moment in college football history. It also represented just another stepping stone in the journey for one of the NFL’s future electrifying stars.

Jaylen Waddle entered the season as the No. 1 wide receiver for the Alabama Crimson Tide. When he fractured his ankle, Nick Saban needed someone to step up for this offense. So, Alabama’s 6-foot-1 and 174-pound receiver took on the challenge and utterly destroyed every opponent that tried to cover him.

Facing SEC opponents all season, Smith shredded secondaries every time he took the field. By the time the final whistle blew, he posted video game-like numbers with 105 receptions, 1,641 receiving yards and 22 total touchdowns.

Of course, success at college and winning the Heisman Trophy doesn’t guarantee success at the next level. But, while we’ve seen plenty of accomplished players turn into historic NFL Draft busts, there’s reason to believe Smith won’t be one of them.

Here are three reasons why DeVonta Smith will not be a bust in the NFL.

In his Heisman speech, Smith spoke to those who also face doubters because of their size. He is providing a voice for those who feel underestimated. Just as important, though, his play is doing plenty of talking and demonstrates why he should have no issues at the next level.

Elite prospects from college struggle sometimes due to not being able to use their size to dominate. The NFL is filled with the best of the best at each position, and it is not as easy to bully the competition.

Smith brings a lot to the table. For one, in an era with diversified looks on offense, he can line up anywhere on the field. He doesn’t have one elite trait, but he can easily create separation on his routes, knows how to make plays after the catch and does the little things that we see from veteran NFL receivers. That’s why he was so great at Alabama. At the next level, he can make an immediate impact for any offense.

A part of the equation that leads to a player becoming a bust is the situation he lands himself in. Some players find themselves in great situations, and others, not so much.

However, Smith has the potential to land in a dream situation. The Philadelphia Eagles have the No.6 pick, and the team desperately needs wide receiver help. The Eagles have a history of reaching on the receiver position, most notably, passing on Justin Jefferson for Jalen Reagor.

The Eagles might take LSU’s Ja’Marr Chase. However, pairing Smith with Jalen Hurts might be too good to pass up. Both played at Alabama, and the connection might turn into one of the most promising duos in the NFL.

Smith’s dream landing spots don’t end there. He could be a great option for the Miami Dolphins, reuniting with college teammate Tua Tagovailoa. The New England Patriots, Detroit Lions and New York Giants each need NFL-ready receivers who can be a go-to target in the passing game. Quite frankly, Smith’s talents make him a great fit for almost any offense. He will just be more impactful if he lands with an accurate quarterback.

Alabama has been on top of the college football landscape for what seems like forever. Alabama makes winning look easy, and the players they pass onto the NFL continue similar dominance.

Julio Jones is one of the best receivers in the NFL since he entered the league. Derrick Henry is a wrecking ball and just rushed for over 2,000 yards and made it look effortless.

Names like C.J. Mosley, Josh Jacobs, Minkah Fitzpatrick are at the top of their respective positions, and they all came out of Alabama. Success seems to run through Nick Saban. It’s especially true at wide receiver. Alabama’s 2019 roster had Smith, Waddle, Jerry Jeudy and Henry Ruggs. In previous seasons, we’ve seen Amari Cooper star in the Crimson Tide’s offense and later become a Pro Bowl receiver.

He seems to have the ideal combination of experience and talent to be successful on the next level.