The latest NFL Draft rumors suggest Justin Fields has invited in plenty of competition to be the second quarterback selected in 2021. 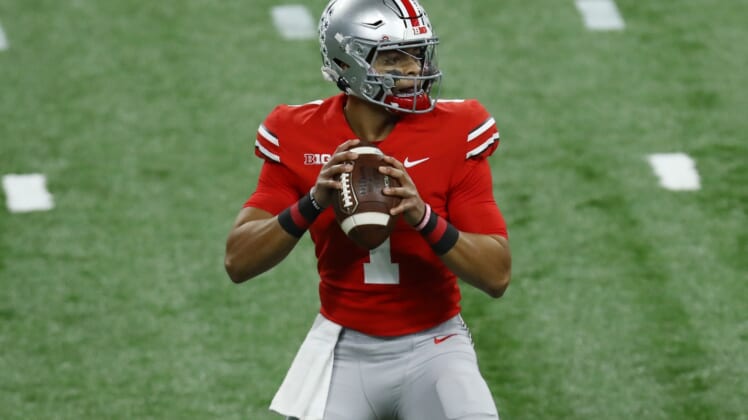 Ohio State quarterback Justin Fields was once thought to be a lock for the second overall pick in the 2021 NFL draft, but the latest rumors suggest otherwise.

After an up-and-down 2020 campaign, Fields is losing his footing as the second-ranked signal-caller in the 2021 draft class behind Trevor Lawrence. It now appears Zach Wilson is the man who’ll ultimately emerge as QB2.

Those who love analytics will love this — or maybe they won’t. One team who has already broken down every pass thrown by Justin Fields in 2020 said in private conversations he looked off the primary target on just seven throws. That’s under three percent of his passes. […] The main reason so many like [Wilson] is his ability to quickly process what’s happening on the field. And as I said back in November, many feel Wilson processes the game faster than Fields.

There is something to be said about how well Fields played in the College Football Playoff against Clemson to set up a showdown with Alabama. However, a banged-up Fields could do little to help the Buckeyes stem the Crimson Tide, who won that CFP finale in blowout fashion by a score of 52-24.

Pro Football Focus’ Mike Renner provided another key piece of information to further emphasize how long Fields waits for plays to develop, which contrasts sharply with the narrative behind Wilson’s success:

There’s no question Fields is an accurate thrower most of the time. He can use his unique running ability to escape from sacks that most other quarterbacks can’t. His dual-threat style will appeal to many NFL teams, as will his untapped potential, upside and grittiness shown after a supremely hard hit he took versus Clemson in the CFP semifinal.

Having highlighted all those qualities — and don’t forget about Fields’ unquestionable leadership intangibles — there’s no question who the superior, higher-ceiling throwing talent is at this point. It’s Wilson. He’s also further along in terms of going through full-field reads, making quick decisions, and he executes off-platform throws better than most prospects in recent years.

No one’s going to argue that Lawrence is the cleanest prospect in the class. However, it’s almost getting to a point where Wilson is closer to Lawrence than Fields is to Wilson. Look for the debate to shift between “Wilson or Fields?” to a tossup between the Ohio State star and North Dakota State’s Trey Lance, a similarly gifted passer who’s dynamic as a runner, too.

According to ESPN’s Adam Schefter, there’s a “distinct possibility” BYU’s Wilson will indeed pass Fields as the surefire QB2 in the 2021 NFL Draft.

Wilson officially declared for the draft on Friday, and with that, multiple experts weighed in to suggest the momentum is all with the BYU star to eclipse Fields as a prospect.

ESPN draft guru Mel Kiper Jr., for instance, said Wilson has “a chance” to be the No. 2 QB. Kiper’s colleague Todd McShay recently slid Fields below Wilson on his updated big board, with the quarterbacks ranking eighth and ninth overall respectively.

Pro Football Focus has been fairly strong forecasting success rates of signal-callers from college to the pros, and has Wilson not only as the second-rated quarterback, but as the second overall player on their complete list of top prospects.

Wilson threw for 425 yards and accounted for five total touchdowns in the Cougars’ bowl win over UCF, ending his spectacular 2020 campaign on a majestic note.

Well, guess what? Fields responded with six TD passes in the College Football Playoff semifinals to defeat Clemson 49-28. The pendulum may have swung back in the Ohio State star’s favor after such an epic outing.

Against Alabama in the national championship game, Fields has the chance to put up big numbers against elite competition, which would help him possibly get the nod over Wilson in the end.

Bleacher Report draft expert Matt Miller, in his final piece for the site, wrote that Fields’ stock is among the biggest talking points around the NFL, and there are serious red flags coming up of late.

“Against the best defenses he’s faced, issues with decision-making and processing speed have been notable concerns,” Miller said. “Fields’ five interceptions against Indiana (one wasn’t on him) and Northwestern will concern scouts.”

In the aforementioned conference title game versus the Wildcats, Fields was 12-of-27 passing for 114 yards and two interceptions and took three sacks. Thankfully, running back Trey Sermon bailed him out with a mind-boggling 331 yards rushing, sparking the Buckeyes to a 22-10 win.

Miller went on to invoke Carson Wentz’s name in reference to Fields’ 2020 regression and also featured a mock draft in which Fields was the third quarterback taken, after Clemson’s Trevor Lawrence (No. 1 to Jacksonville) and BYU product Zach Wilson (No. 4 to Carolina). The mock scenario had the Buckeyes dual-threat dynamo landing with the Detroit Lions as Matthew Stafford’s long-term successor.

But is Fields even worthy of being the No. 3 QB at this point?

Part of the reason Fields was considered such a mortal lock as the 2021 class’ second-best quarterback is his top-tier recruit status. He came out of high school the same year as Lawrence, and the two have been compared and linked ever since. Whereas Lawrence thrived right away as a true freshman at Clemson, Fields’ success was more circuitous, requiring a transfer from Georgia to Ohio State.

Although his numbers are still pretty strong (15 touchdowns, five interceptions, 72.6% completion rate), the shortened 2020 campaign didn’t do Fields any favors. Nor did the fact that so many prospects rose from relative obscurity and into the first-round conversation.

In the battle for SEC supremacy last weekend, Florida’s Kyle Trask and Alabama’s Mac Jones engaged in a 52-46 shootout that went in favor of the Crimson Tide. They both absolutely balled out at a higher level than Fields has probably ever shown against an elite opponent. That ties directly to what Miller is discussing as a concern about Fields’ NFL future.

Trask leads the nation with 4,125 yards passing and 43 touchdown throws, and Jones is in the midst of Pro Football Focus’ highest-graded college quarterback season ever.

Additionally, the Buckeyes have had a long line of distinguished starters to operate their spread offense. Whether it was Braxton Miller, JT Barrett, Cardale Jones or Dwayne Haskins, all of them put up strong numbers. However, not one of them has been good in the NFL.

Fields is expected to be the exception, yet it’s hard to ignore that list of productive players who didn’t pan out at the pro level. His running ability isn’t in question. It’s Fields’ capacity to throw from the pocket that’s in doubt, as The Athletic’s Dane Brugler referenced:

Too often, at least in 2020, Fields has been a “see-it” thrower. This means he must see a receiver come wide open out of his break before he pulls the trigger. Because Ohio State is so superior to most of its competition and Fields has above-average arm talent among NFL prospects, he’s able to get away with this. That is, until better competition rises up to stop him, as was the case with Northwestern and Indiana this season.

Throwing with anticipation is a coveted quality that tends to translate well to the NFL. Wilson, Trask, Jones, and even North Dakota State’s Trey Lance do it better right now than Fields does. That’s not to say the Buckeyes star can’t do it; it’s just that the learning curve will be steeper for him.

With as many as five quarterbacks possibly going on Day 1 of the 2021 NFL Draft, Fields will need to impress during the College Football Playoff and in the pre-draft process. Otherwise, he could find himself being the last off the board.