The Ohio State Buckeyes and Justin Fields had an unforgettable 49-28 triumph over Clemson in the CFP semifinal on Friday evening. 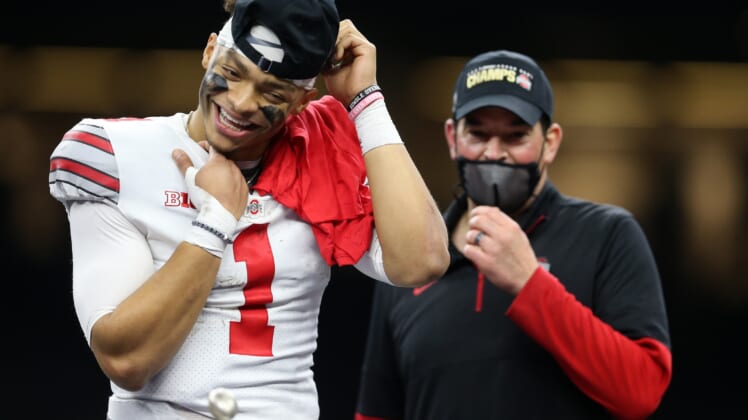 The Ohio State Buckeyes fought off the critics — including Clemson coach Dabo Swinney — and Justin Fields overcame a brutal hit to throw six touchdowns in a 49-28 rout of the Tigers in the second College Football Playoff semifinal.

Fields got laid out by Clemson linebacker James Skalski in the second quarter of the game and was ejected. That wound up turning the momentum in Ohio State’s favor, as the Buckeyes rallied around Fields’ gutsy performance and thoroughly dominated the Tigers throughout.

It really looked like Fields wasn’t coming back after Skalski lowered his helmet right into his back when the dual-threat signal-caller took off to run.

Officials had to review the play to determine that the Clemson playmaker was, in fact, in violation of the targeting rules. Although many disagreed with the penalty, it was called, but the larger concern for the Buckeyes was Fields’ health.

After exiting the field for just one play, Fields returned to throw a nine-yard touchdown strike to Chris Olave. But the QB gingerly went to the sideline and didn’t appear as though he’d be coming back after that gutsy effort.

Oh, Fields came back all right, orchestrating a 12-play, 80-yard drive capped by a 12-yard scoring toss to Jeremy Ruckert with 11 seconds remaining in the first half to put the Bucks up 35-14. Fields would finish with as many incompletions (six) as touchdown passes on 28 attempts, amassing 385 yards through the air. ESPN Stats & Info provided further context for Fields’ historic showing:

Even for Clemson star quarterback Trevor Lawrence, such a deficit proved insurmountable, despite his best efforts and eventual total of 400 yards passing. Now, the big questions around Fields are whether he can do enough to beat Alabama for the national championship and eclipse BYU’s Zach Wilson as the No. 2 quarterback prospect in the 2021 NFL Draft.

Either one of those didn’t really seem in play before Friday night. Fields is reminding everyone he has the goods to be a future franchise quarterback in the pros, and possibly the latest athletic field general to give Nick Saban fits on the big stage.