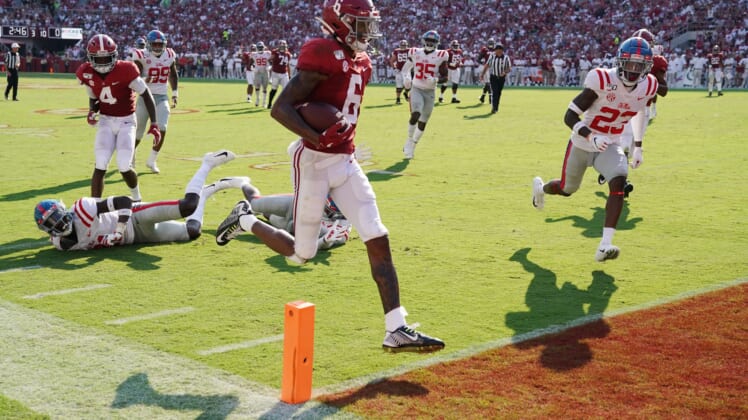 Alabama wide receiver and potential top-10 pick in the 2021 NFL Draft DeVonta Smith has made history by winning the 2021 Heisman Trophy. Despite Smith’s absolute brilliance on the field for the Crimson Tide, this is a record-breaking achievement for a college football wide receiver.

The last player at this position to win the Heisman was Desmond Howard of Michigan back in 1991. However, a lot of that had to do with his return ability. In reality, the last traditional receiver to come away with the Heisman before DeVonta Smith was Tim Brown all the way back in 1987.

To say that DeVonta Smith earned this achievement would be an understatement. The dude absolutely dominated the college football landscape heading into Tuesday’s announcement. He has recorded 105 receptions for 1,641 yards and 20 touchdowns in 12 games. Alabama still has one more game to play, the College Football Playoff title game against the Ohio State Buckeyes.

Smith showed up big time over the past two games, helping Alabama win the SEC Championship Game over Florida and blowout Notre Dame in the playoff semifinal. He recorded a resounding 22 receptions for 314 yards and five touchdowns in those two games. That cemented DeVonta Smith winning the 2020 Heisman Trophy.

Despite being just 6-foot-1 and boasting a skinny frame, there’s every reason to believe DeVonta Smith will be among the first receivers off the board when the 2021 NFL Draft comes calling.

You simply can’t teach the hands he boasts and game-breaking plays he made on a consistent basis with Alabama. Winning the Heisman cements Smith’s status as a top-10 pick in our books.