DeVonta Smith was absolutely incredible during Alabama's 31-14 Rose Bowl victory over Notre Dame on Friday, and may have locked up the Heisman Trophy. 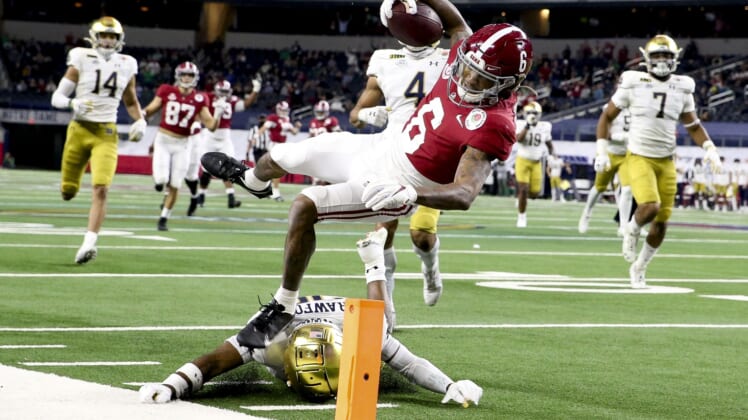 The top-ranked Alabama Crimson Tide proved their superiority in the College Football Playoff semifinals on Friday, crushing Notre Dame 31-14 thanks in large part to a three-touchdown performance from Heisman Trophy finalist DeVonta Smith.

It’s already apparent Smith is the best receiver in the collegiate game and was named AP Player of the Year. Now it’s a matter of whether he’ll win NCAA gridiron’s most prestigious individual award after his latest masterpiece, wherein he logged seven catches for 130 yards and, as mentioned, took three trips to the end zone.

Instead of dwelling on the negatives on New Year’s Day — re: “Some things change, but Notre Dame getting blown out in a big game remains an inevitability” — let’s focus on the positive of Smith’s Rose Bowl greatness at the dawn of 2021.

Yes, some credit should go to Crimson Tide quarterback Mac Jones for making some of these throws. On the other hand, how hard is it when such a devastating route-runner like Smith is creating such crazy separation on a consistent basis. Oh, and it helps that the wideout has impeccable footwork on the edges of the field, is a strong hands catcher and has ball skills for days.

Whether he was high-pointing the ball over the middle, taking a swing pass to the house for six, or showing off some ornamental toe-drag swag en route to his final touchdown, Smith’s full arsenal of skills were on full display against the Fighting Irish’s toothless secondary. His three scores got him to 20 receiving TDs for the season, per ESPN Stats & Info, which is incredible to say the least.

Despite being listed at only 6-foot-1 and 175 pounds, the Alabama senior doesn’t let any lack of size or his slender frame hinder his ability to be an historically productive college player. Not only should he win the Heisman Trophy, but he’ll also likely be an early first-round pick in the 2021 NFL Draft.

Now, let’s get to the social media goodness, as Twitter was straight-up freaking out over Smith’s epic showcase on the big postseason stage.