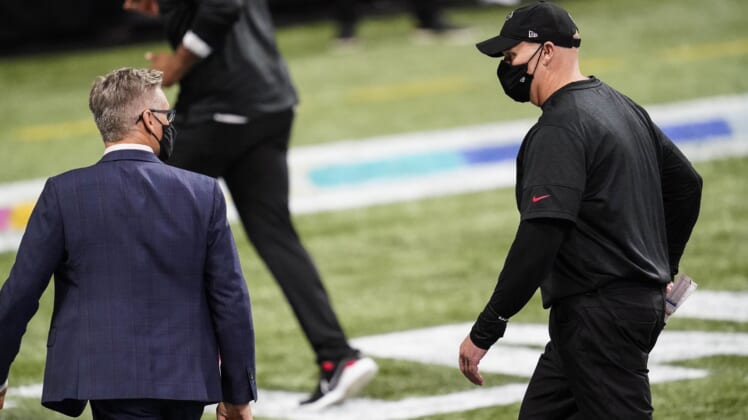 For the fifth consecutive week to open the 2020 NFL season, Dan Quinn and the Atlanta Falcons found themselves on the receiving end of a loss. This time, it came against a red-hot Carolina Panthers squad by the score of 23-16.

While Atlanta’s defense has struggled through the first four games of the season, it was all about the offense on Sunday. Without Julio Jones in the mix, Atlanta put up just one touchdown-scoring drive. It also had to settle for three field goals. That was the difference.

It’s now expected to lead to a move that most of us have been anticipating.

The news comes to us via Jeff Schultz of The Athletic and included the note that Atlanta will make the decision official on Monday or Tuesday.

The Falcons entered Sunday’s game having yielded an average of 34.5 points per game. Dating back to his time with the Seattle Seahawks, Quinn has been known as a defensive mind. Obviously, that unit’s struggles have played a role in Atlanta’s 0-5 start to the season.

For Atlanta, it has simply been about regression under the long-time head coach

After being hired back in 2015, Quinn brought the Falcons back to relevance on the broader NFL stage. However, the team has regressed since then.

Falcons owner Arthur Blank has been among the most faithful at his position in the sports world. Some say that he held on to Quinn too long. Either way, this is a move that Atlanta simply needed to make.

Atlanta has been wasting the back end of quarterback Matt Ryan’s prime years. The team’s defense has taken a major step back this season following the departures of Pro Bowlers Vic Beasley and Desmond Trufant. Defensive coordinator Raheem Morris seems to be in over his head in that role.

Whether the Falcons opt to go into full-scale rebuild mode following what promises to be a lost season remains to be seen. However, the organization simply couldn’t justify keeping Quinn around after its worst start to a season since 1997 under Dan Reeves.