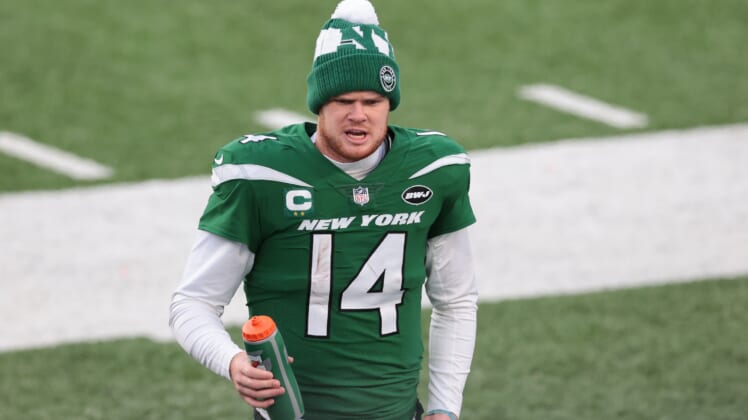 NFL rumors: The New York Jets missed out on the No. 1 pick in the 2021 NFL Draft and the right to draft Trevor Lawrence. While they might not land the generational quarterback, though, a blockbuster move could still be coming this offseason.

It’s only a matter of time before head coach Adam Gase is fired, with the organization set to fire him after Sunday’s game. Once Week 17 wraps up, the focus will shift to an offseason that will be pivotal in determining this team’s future.

That will be especially true with the looming decision general manager Joe Douglas faces, one that will end in a blockbuster trade with either path he chooses.

NFL rumors: New York Jets will either trade Sam Darnold or No. 2 pick in NFL draft

According to ESPN’s Adam Schefter, the New York Jets are expected to make a blockbuster trade this offseason. Ultimately, it will come down to whether the franchise trades quarterback Sam Darnold or move the No. 2 pick in the 2021 NFL Draft.

In terms of trade value, the 2nd overall pick would net a far greater return. While Ohio State quarterback Justin Fields isn’t on Lawrence’s level as a prospect, he would be the No. 1 overall pick in other NFL Drafts. Coming off a phenomenal showing in the College Football Playoff Semifinal, Fields silenced the concerns with his domination against the Clemson Tigers.

For NFL teams needing a quarterback, No. 2 is the place to be. The Atlanta Falcons, Detroit Lions, New York Giants, Denver Broncos and San Francisco 49ers could all be in the market for Fields, BYU quarterback Zach Wilson or North Dakota State gunslinger Trey Lance. Plus, drafting a quarterback comes with a potential five-year contract.

On the other hand, it might be wise for the Jets to keep the No. 2 overall pick. If the front office is confident Fields can be a franchise quarterback, bringing more to this offense than Darnold, staying put is the best option. Any rookie would be under contract at a team-friendly cost for the next four-plus seasons, while Darnold is only under contract for two more seasons.

New York Jets: How the team can rebuild around Justin Fields in 2021

Darnold has mentioned as a trade candidate in NFL rumors for months. With his third season coming to a close, he hasn’t lived up to expectations since being selected with the No. 3 overall pick in the 2018 NFL Draft.

Before making any decision, the Jets will hire a head coach. The team will likely target an offensive mind, bringing in someone who can overhaul this aerial attack and either develop a rookie or get the most out of Darnold.

No matter what decision is made, things will get interesting in New York this offseason. Already loaded with two first-round picks and flush with cap space, the Jets will be one of the most active teams this offseason.