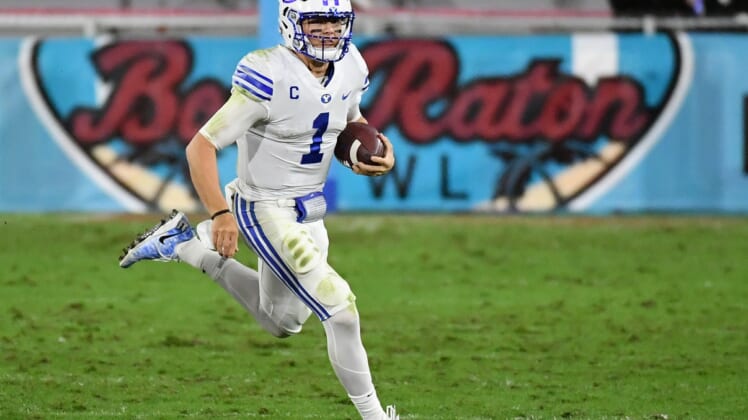 The New York Jets are locked oin at No. 2 in the coming 2021 NFL Draft after winning each of their past two games. Prior to that, NFL rumors concluded that the long-downtrodden organization would take Clemson quarterback Trevor Lawrence with the first pick.

Now that Lawrence is a virtual guarantee to land with the Jaguars at one, New York’s selection takes on even more meaning. For all intents and purposes, the 2021 NFL Draft will start with that pick.

Does this mean Jets general manager Joe Douglas and Co. will listen to offers for the selection or take a quarterback at No. 2? We have some NFL rumors on this front, and they are rather interesting.

“I don’t think they are dead set on a quarterback at this point,” NFL insider Tony Pauline of Pro Football Network noted on Wednesday. “They still have to hire a coach. I think they will listen to offers, but ultimately my guess at this point is that the Jets select a quarterback.”

Despite the issues we’ve seen from former No. 3 pick Sam Darnold through his first three seasons in the league, this report seems to make some sense. Having started this season 0-13 and looking like one of the worst teams in modern NFL history, it’s not a stretch to say that the Jets have larger issues than the quarterback position.

Sure Darnold has not played well. Some of that has to do with the performance of soon-to-be-fired head coach Adam Gase. Darnold himself deserves some of the blame, too. After all, he’s put up 44 touchdowns and 37 interceptions while averaging a mere 212 passing yards in 37 career starts.

More than anything, NFL rumors suggesting that the Jets could trade out from the second pick stem from the possibility that they would add a ton of draft pick assets in order to rebuild the least-talented NFL roster north of Jacksonville.

BYU quarterback Zach Wilson is coming off a brilliant bowl performance. He’s been ascending the draft board a whole lot this college football season. Meanwhile, Ohio State’s Justin Fields will also likely be a top-five pick when the 2021 NFL Draft comes calling in April. It goes without saying that the Jets’ pick is valuable given that Trevor Lawrence is almost guaranteed to be the top guy off the board.

We could see something similar to the 2016 NFL Draft when the Philadelphia Eagles traded up to No. 2 with the Cleveland Browns in order to select Carson Wentz after it became a foregone conclusion that the Rams would opt for Jared Goff. In that trade, Cleveland was able to add a first-round pick, second-round pick, third-round pick and fourth-round pick to move down from No. 2 to the eighth selection.

Depending on how far the Jets might be willing to move down should these NFL rumors come to fruition, they could be looking at a whole lot more in terms of compensation.

NFL rumors: Teams that might be looking to move up to the second selection

There’s a near-unlimited amount of teams potentially looking to add a franchise quarterback to the mix. Should Wilson further separate himself from Fields during the pre-draft process, that will be taken to a whole new level.

These are just three of many examples for the Jets should they opt to trade down from the second selection. Expect NFL rumors to pick up on this front once the 2020 season concludes and the offseason gets going.