Zach Wilson has to be considered the second-best quarterback in the 2021 NFL Draft. How will his meteoric rise impact the teams near the top? 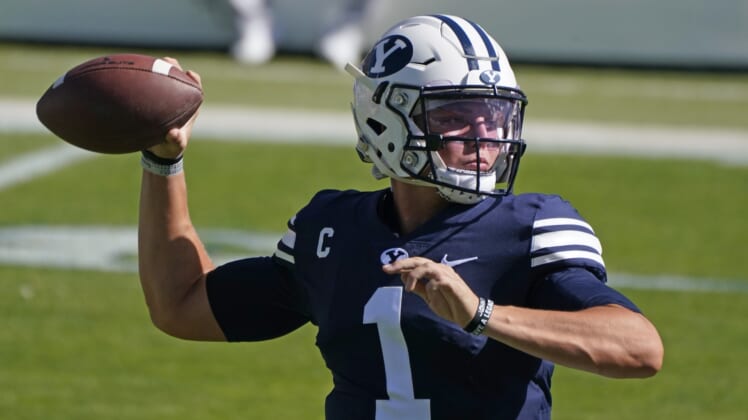 BYU quarterback Zach Wilson is almost certainly entering the 2021 NFL Draft, and when he does, he’ll be the second-best prospect at the position to Trevor Lawrence. Wilson crystalized that fact in an incredible finale to cap the Cougars’ 11-1 season.

Wilson completed 26 of 34 passes for 425 yards and three touchdowns, and also ran for two scores in BYU’s 49-23 victory over UCF in the RoofClaim.com Boca Raton Bowl.

I know what you’re thinking. “YOU LAZY BOX SCORE SCOUT!” Right, cool. He threw all over an outmatched opponent in a bowl game. Big deal.

It’s not like that. Wilson was and is for real. Justin Fields has nothing on him.

The Cougars signal-caller completed 73.5% of his passes for 3,692 yards, 33 touchdowns and only three interceptions, and found the end zone 10 times on the ground. He’s a legitimate dual-threat quarterback who takes great care of the ball, as PFF College highlighted before BYU’s bowl game rout:

NFL Network draft guru Daniel Jeremiah had this to say about Wilson during last night’s game as the gifted passer was straight up dealing all over the gridiron:

Oh, would you like to see some of this easy throwing in action? Tell me: can Justin Fields do this?

That’s just a taste. Wilson has been doing this all season. He’s not inflating his completion percentage with short throws near the line of scrimmage. His air yards per attempt entering Tuesday’s season finale (12.4) were higher than his actual yards per attempt (10.9).

Someone who throws downfield so often with that high of a completion rate and manages not to put the ball in harm’s way is a special player. Against UCF, though, Wilson showed his discipline on multiple occasions, checking the ball down underneath to the open man to convert key third downs. His attention to detail on underneath throws in terms of ball placement and leading the receiver properly is exemplary and complements his deep-ball prowess well.

While not as big as Allen, Wilson has similar arm talent in terms of throwing power, downfield accuracy, and a knack for making off-platform throws, not to mention running ability. The thing is, it took Allen until his third year as a pro out of Wyoming to get that whole precision passing bit down. Accuracy is something Wilson already has in spades. That may sound hyperbolic, but again, Wilson is really good.

Related: NFL Draft rumors 2021: Justin Fields stock sinking, may not be No. 2 QB

The 2021 NFL Draft is loaded with prospects at the quarterback position. In addition to the aforementioned Fields, the previously presumed lock to be QB2 until his interception-laden performances against Indiana and Northwestern, there’s North Dakota State’s Trey Lance, Florida product Kyle Trask, Alabama’s Mac Jones and of course the crown jewel, Clemson prodigy Trevor Lawrence.

Lawrence is the no-brainer pick to go first in the draft. If the season ended today, the Jacksonville Jaguars would have that pick and are going to take him in that scenario. Thanks to a 23-20 victory over the Los Angeles Rams in Week 15, the New York Jets snapped their season-long winless streak and are now in the No. 2 spot.

That brings up all kinds of compelling scenarios: Do the Jets stick with Sam Darnold under center and take the best player available at No. 2? Or, does general manager Joe Douglas boost New York’s rebuild by bringing in a king’s ransom haul from a trade partner who wants to move up and get their quarterback of the future?

Let’s look at some intriguing landing spots for Wilson.

This is where the Panthers are in the draft order as of now. Having just fired general manager Marty Hurney, Carolina is in a period of transition in its front office. There’s no question the move late in the season came to better prepare for the draft, so that head coach Matt Rhule can be on the same page with whomever takes over for Hurney about what the team will do at quarterback.

Wilson still being on the board is very possible, as long as the Jets make a pick at No. 2. The Cincinnati Bengals chose Joe Burrow at the top of this year’s draft, so there’s no way they’ll take a QB. Plus, they have a track record of being completely averse to trading on draft day.

Teddy Bridgewater has been serviceable but unspectacular. Carolina has had numerous chances to win close games, only for Bridgewater to fall short. After drafting all defense in 2020, Wilson is exactly the X-factor the Panthers need at the sport’s most vital position., and with Burrow’s college offensive coordinator in Joe Brady calling the shots, he’d be suited for immediate success.

What’s fascinating about the current draft order is the fact that two NFC South rivals in Carolina and Atlanta are slotted at fourth and fifth respectively.

Something is deeply wrong with the Falcons. They blew a 17-point lead to the Tampa Bay Buccaneers in Week 15 and just can’t seem to put anyone away. It’s not necessarily Matty Ice’s fault, but he’s on the downside of his career, and with a new front office and head coach coming in, what better way to make a splash than to leapfrog a divisional adversary and land the second-best quarterback in the draft?

Wilson could theoretically ride the bench for his rookie campaign while Ryan auditions for his next team. This scenario brings to mind how Patrick Mahomes waited in the wings behind Alex Smith in Kansas City for a season before exploding onto the scene as the NFL MVP. It brought out the best in Smith, and may revitalize Ryan’s career.

Now, the cost-benefit analysis of this is key for both sides. Would the Jets be OK with missing out on a blue-chip player higher up in the draft? A trade package for San Francisco would almost certainly need to include an established star player in addition to multiple draft picks, including a 2022 first-rounder.

Shanahan is an offensive wizard whose best quarterback since he landed with the 49ers is Jimmy Garoppolo, who’s serviceable, but can’t stay healthy. This is the man who made Robert Griffin III a first-year phenom in Washington, and once had Matt Schaub lead the NFL in passing yards for the Houston Texans.

When you really think about it, Shanahan hasn’t really had an extraordinarily gifted thrower to work with like Wilson, who’s not like RG3 in the sense that he won’t be reckless with his athleticism as a ball-carrier.

Niners general manager John Lynch would need to conjure up something special to get this deal done, but Shanahan and San Francisco fans would be doing cartwheels at the prospect of upgrading over Jimmy G and readying for playoff contention again after a down, injury-plagued 2020 season.