Patriots rumors: Cam Newton could be done in New England after one season 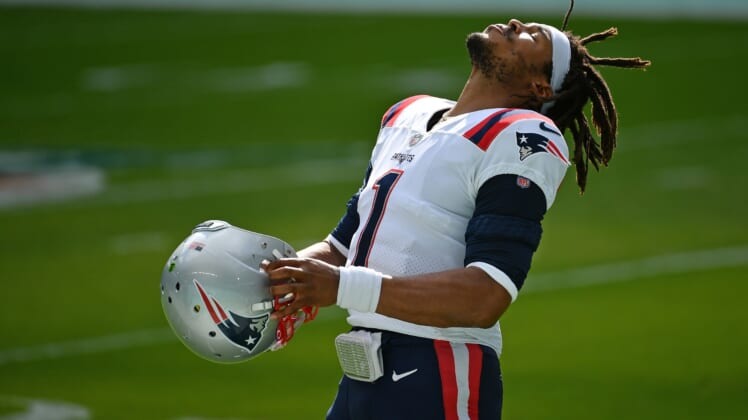 While Newton himself does not deserve a vast majority of the blame for the Patriots’ struggles in their first post Tom Brady season since 2001, the former NFL MVP has not been good this season. It’s now leading to Patriots rumors suggesting that Cam Newton could be one-and-done after a single year in New England.

Patriots rumors: Cam Newton could be done in New England after one season

“I don’t know if their quarterback of the future is on their roster,” Fox Sports NFL insider Jay Glazer reported on Monday. “Jarrett Stidham, I really did think they liked him a lot going into this offseason. Until they got Cam Newton, I thought they really thought they could have had a future with Stidham. If that was the case, they’d probably have him in there right now.”

Newton, 31, has thrown all of five touchdown passes against eight interceptions while boasting a 6-7 record in 13 starts for the Patriots this season.

While the former No. 1 overall pick of the Carolina Panthers has added 11 rushing touchdowns, it’s apparent that he’s not the same quarterback we saw a half-decade ago. As a team, the Patriots rank 27th in the NFL in scoring at under 21 points per game.

In the defense of Cam Newton, these Pats lack the necessarily skill-position talent for any quarterback to succeed under center. Second-year receiver Jakobi Meyers is the team’s leading pass catcher with 49 receptions. Meanwhile, starting running back Damien Harris is not even on pace for 1,000 yards on the ground this season. That doesn’t even take into account the struggles of former first-round pick Sony Michel as a sophomore (304 rushing yards).

Patriots rumors: What will happen at the quarterback position?

As Glazer noted, Bill Belichick and Co. were not too high on Jarrett Stidham heading into his sophomore season. He apparently didn’t do himself any favors during training camp after impressing the Patriots’ brass as a rookie last year. In fact, Brian Hoyer got a start earlier in the season over Stidham when Cam Newton was sidelined to COVID-19.

It sure looks like Patriots rumors this offseason will focus on them going after a quarterback outside of the organization. The good news? There seems to be some possibilities for team that just saw its two-decade dynasty come to an end. Matt Ryan, Jimmy Garoppolo, Matthew Stafford and Carson Wentz could all potentially be had on the trade market. All four would be seen as upgrades over Cam Newton.

Dak Prescott, Jacoby Brissett, Mitchell Trubisky and Andy Dalton are all potential free agents the Patriots could also chase after. However, it’s not yet known whether the latter threw would be seen as an upgrade under center.

What we do know is that Bill Belichick is the second-oldest head coach in the NFL. It’s highly unlikely that New England is going to rely on a rookie quarterback to start in 2021.

Regardless of the quarterback position, one thing became clear for the Patriots this season. They don’t have the all-around talent on offense to put a signal caller in a great position. As much as Cam Newton has struggled, that has to be the team’s focus right a long with potentially finding a long-term solution under center. It’s that simple.