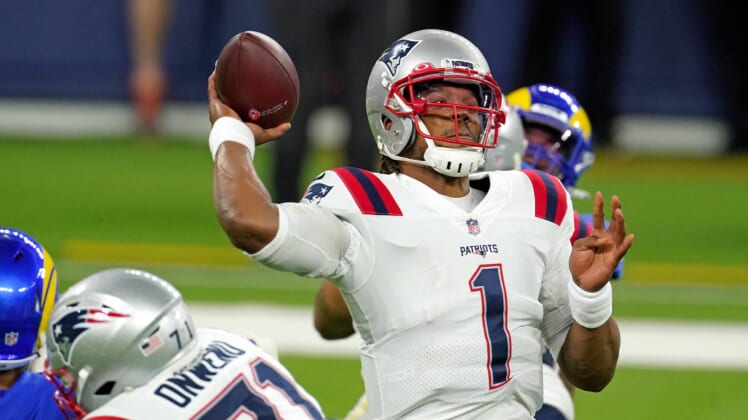 New England Patriots quarterback Cam Newton entered Thursday’s game against the Los Angeles Rams having thrown five touchdowns compared to nine interceptions in 11 starts this season. Sure the former NFL MVP has 11 rushing touchdowns to his name, but those passing stats are about as bad as it gets.

Like clockwork, Cam Newton continued his struggles with New England in must-win mode against the Rams to open Week 14. Already down 10-0 in the first half, Newton threw a brutal pick-six into the hands of Rams linebacker Kenny Young. It might be the worst pass we’ve seen this season.

We’re not too sure what Newton was looking at here. New England was obviously attempting a screen pass. Unfortunately, the struggling quarterback didn’t even check to see if the Rams had a linebacker in coverage. The end result was an interception and a 79-yard return for a touchdown.

This is not going to make Bill Belichick happy. Down 17-0 in a game the 6-6 Patriots must win, Cam Newton let the squad down big time. Not only did he gift Los Angeles seven points, the veteran quarterback took points off the board for New England.