Jets rumors: Head coach Adam Gase yet to be told he’ll be fired 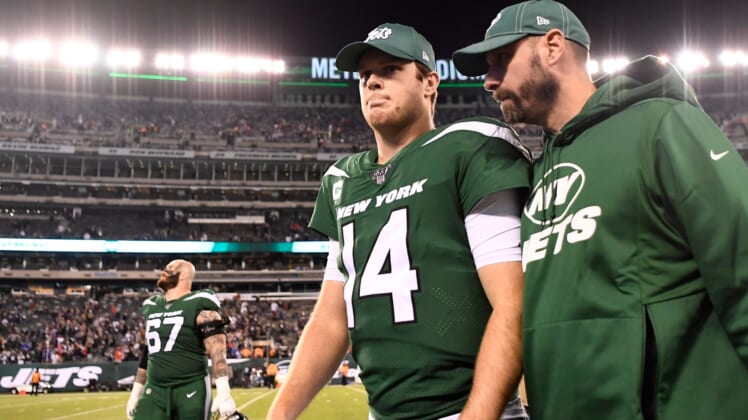 New York Jets quarterback Sam Darnold (14) and head coach Adam Gase walk off the field together after a disappointing shut-out loss against the New England Patriots at MetLife Stadium on Monday, Oct. 21, 2019, in East Rutherford.Nyj Vs Ne Week 7

Despite their ongoing two-game winning streak to conclude the season, New York Jets rumors continue to suggest that embattled head coach Adam Gase will be fired shortly after their season finale against the Patriots this coming Sunday.

Gase, 42, has been the subject of Jets rumors relating to his eventual ousting on a near never-ending loop throughout the 2020 season. That was taken to a whole new level once the Jets started the campaign with a 0-13 record and looked to be among the worst teams in modern NFL history.

While New York has earned consecutive victories over playoff contenders in that of the Rams and Browns, it’s highly unlikely to save Adam Gase from hitting the unemployment line come “Black Monday.” Apparently, this is also news to Mr. Gase.

Jets rumors: Adam Gase yet to be told he’ll be fired

“That was news to me,” Gase said Wednesday in response to a report that a decision has already been made, via the NY Daily News. “No one has said that to me.”

It was reported ahead of Week 16 that Gase would be fired if his Jets were to lose to the Browns. Instead, Cleveland found its top-four receivers out due to COVID-19 protocols. It led to a 23-16 Jets win, preserving Gase’s job for at least one more week.

Even then, there’s absolutely no reason to believe Adam Gase will be back with the Jets in 2021. He’s looked in over his head since joining the franchise as its head coach ahead of the 2019 season, posting a combined 9-22 record in the process.

Thus far this season, the Jets have been outscored by an average of nearly two touchdowns per game. Add in issues with former Jets star Jamal Adams as well as the lack of progression from young quarterback Sam Darnold, and the writing has been on the wall for some time in Jersey.

This situation could be less complicated now that the Jets have missed out consensus No. 1 overall pick Trevor Lawrence in the 2021 NFL Draft. It’s furthered the odds that Darnold will indeed return for his fourth season as the team’s quarterback. Given the issues the former No. 3 pick has had under Gase, it makes sense for a clean break.

Jets rumors have also concluded that general manager Joe Douglas will be going after a big-name coach, potentially on the offensive side of the ball. Whether that’s to help Darnold or another young quarterback progress under center remains to be seen.

Options in this regard include current Michigan head coach Jim Harbaugh, who has been linked to a return to the NFL after previously leading the San Francisco 49ers to the Super Bowl following the 2012 season. Various reports suggest that Harbaugh has received interest from multiple teams around the NFL should he elect to leave Michigan.

Kansas City Chiefs offensive coordinator Eric Bieniemy and Joe Brady of the Carolina Panthers are two other possibilities for the Jets once they move on from Gase.

What we do know is that Adam Gase will be out of a job within the next few days. Even if he has not been told a decision has been made, it would be foolish to believe New York’s brass is still on the fence. They need to start anew, and that begins at the head coach spot.