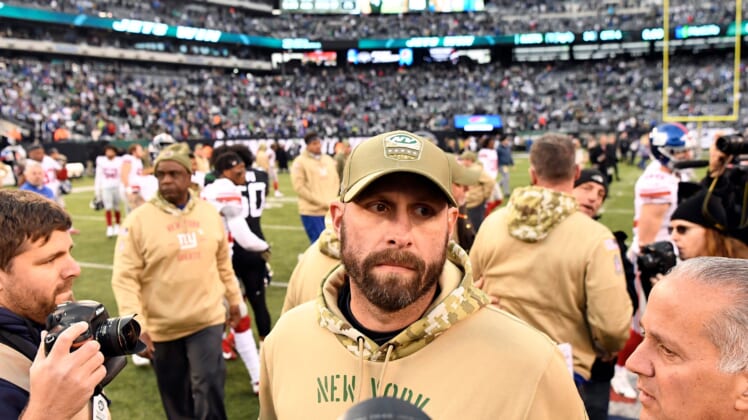 New York Jets head coach Adam Gase spoke to the media on Wednesday and reflected on his disappointing tenure in the midst of an abysmal 0-13 season.

It seems Gase is holding himself accountable for falling short in his prestigious job post, and he specifically discussed failing Jets CEO and owner Christopher Johnson.

In a report from Rich Cimini of ESPN.com, a sullen Gase expressed admiration for Johnson and was wistful about what could have been.

“He knows how I [feel]. I’ve told him multiple times. He deserves better, especially with how he is with our players, our staff, coaches … anybody involved in this organization. I mean, I couldn’t ask for to work for a better guy. […] You try to figure out where things went wrong and what we can change…For him not to feel a playoff feel, of being competitive in December, it’s disappointing to me that we haven’t been able to do that for him.”

Gase is rapidly wearing out his welcome in only his second season at the helm in New York. After the team showed marked improvement at the end of 2019 campaign on the way to a 7-9 record, it seemed as though Gase’s hiring was a bold move that’d work in the Jets’ favor. He’d come over from the AFC East rival Miami Dolphins off of back-to-back losing seasons, yet seemed to be on schedule to help the rebuild in New York.

Sadly, it’s gone so wrong that Gase is almost guaranteed to find himself out of a job. Between failing to develop young quarterback Sam Darnold, being a horrible play-caller and not getting on the same page with now-fired defensive coordinator Gregg Williams, Gase has been an unmitigated disaster in the Big Apple.

Despite the dysfunction that seems to perpetually plague the Jets franchise, high status in the 2021 NFL Draft and over $76 million in salary cap room will make for an attractive destination as premier head coach candidates for 2021 assess their options. Plus, turning around a team in such a big market comes with plenty of fan adoration and glowing press. While there’s a bitter flip side to all that many New York coaches have experienced, it shouldn’t deter any of the big names seeking to fill the impending Gase vacancy.

In our piece on the moves the Jets must make to accelerate their rebuild, Los Angeles Rams defensive coordinator Brandon Staley is mentioned as a very viable candidate. Having been around another young head coach in Sean McVay to witness how he’s changed that organization’s culture, perhaps Staley, a Vic Fangio disciple, could transform New York’s flailing defense and attract a premium staff to position the team for a swift turnaround.

The silver lining to Gase’s impending departure, of course, is the hope of having the no. 1 overall pick. Although rumor has it that incumbent Jets players like Darnold under center, it’d be a total missed opportunity for general manger Joe Douglas not to draft Clemson signal-caller Trevor Lawrence.

Courtesy of the simulator over at Pro Football Network, we’ve come up with a three-round mock so as not to get too granular and try to show how some of the higher hypothetical picks could help New York next season:

Disclaimer! There’s plenty of time prior to the 2021 NFL Draft, and other sites with similar simulations are bound to evaluate players differently. Regardless, it’d be quite a haul for Douglas to walk away with multiple edge-rushers, which the Jets desperately need, help in the secondary and another viable receiving target for Lawrence to throw to.

Thanks to the aforementioned treasure chest of cap space for Douglas to work with, he can be a smart but aggressive spender in free agency, too.

Once Douglas hires a new head coach who’s on the same page with him and is eager to work with Lawrence, there can be more synergy in the organization, and New York will have a far better chance at a turnaround going forward, as opposed to the arranged Gase-Douglas marriage.