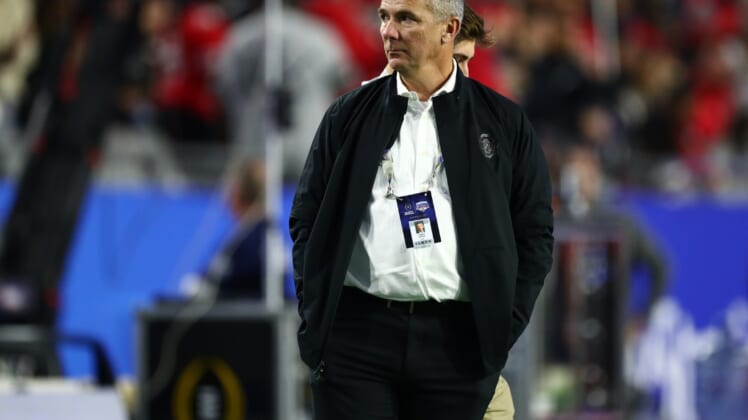 NFL coaching candidates: The Houston Texans, Atlanta Falcons and Detroit Lions have already fired their coaches this season, kicking off their respective searches for a new head coach. With more names expected to be fired in the coming weeks, especially on Black Monday, organizations will take notice of an impressive list of NFL coaching candidates in 2021.

With so many openings popping up across the league, we will see plenty of movement this offseason. Let’s dive into the top NFL coaching candidates who could become head coaches in 2021.

It might sound crazy to think the coach who walked away from Ohio State and the University of Florida for health reasons would suddenly make the jump to the NFL. The 56-year-old coach certainly loves his current gig as a Fox analyst, but it seems leaping to the highest level isn’t out of the question.

Urban Meyer is reportedly a candidate to monitor for the Jacksonville Jaguars, who haven’t even fired Doug Marrone yet. But if an organization is looking for a sharp football mind to oversee the team in a new direction, Meyer could be the guy.

He built powerhouses at Utah, Florida and Ohio State. Across 17 seasons as a college head coach, Meyer’s programs have posted a 187-32 record in the regular season and a 12-3 mark in bowl games. Not only is he a three-time national champion, but he has also helped send countless talent to the NFL.

Ultimately, it’s all up to Urban Meyer. He already turned down the Texas Longhorns this year and seems happy serving as a football analyst. If there’s that itch to return to football or a desire to prove himself in the NFL, plenty of teams will be interested.

Daboll received interest before the 2020 season, receiving an interview with the Cleveland Browns. Recognized for his work as Alabama’s co-offensive coordinator (2017) and for his success with the Bills, Daboll’s name has quickly climbed up the priority list for NFL coaching candidates. In fact, per ESPN’s Jeremy Fowler and Dan Graziano, Daboll is widely expected to become a head coach in 2021.

There’s a good reason for it. Besides his time learning from Bill Belichick and Nick Saban, Daboll has a proven track record with his offense. Just look at the Bills in 2020. After averaging 19.6 points and 345.6 total yards per game in 2019, Buffalo’s offense averages 29.1 points and 386.7 yards per game this season. Meanwhile, the erratic Josh Allen is now playing like an MVP-caliber quarterback. Daboll’s brilliance and experience make him an outstanding candidate, especially for openings with a great, young quarterback.

Saleh is already emerging as a strong candidate to take over in Detroit. While teams don’t typically make consecutive coaching hires from the same side of the ball, Saleh fits Detroit. He grew up in Michigan, brings an approach that his players love and he will deliver the kind of hard-nosed football that fans in the state appreciate.

Lions head coach: Why Robert Saleh should be the team’s choice

While the Lions might be the favorite, there will be competition. Saleh helped create one of the NFL’s most suffocating defenses in 2019. Even with multiple starters lost to injury, San Francisco’s defense is still a sharp unit. With a proven track record and overwhelming approval from some of the league’s most respected veterans, Saleh is one of the top NFL coaching candidates.

When Andy Reid insists you should be a head coach, NFL teams take notice. Bieniemy has served as Kansas City’s offensive coordinator since 2018, helping orchestrate an offense that won a Super Bowl, set records and saw Patrick Mahomes win NFL MVP. This passing attack finds ways to exploit every defense, no matter what scheme is being run, a credit to Bieniemy’s mind and his preparation.

The 51-year-old will be the most coveted NFL coaching candidate this offseason. He learned the ropes of the interview process during the coaching cycle last year. When he does it again in 2021, he might have two Super Bowl rings on his hand. There’s already speculation that he will go to Houston, but the Texans will have to fight off every other team. Arguably the best of the NFL coaching candidates, it’s a lock that Bieniemy is hired as a head coach in a few months.

Bowles didn’t depart the New York Jets under the best circumstances, with fans still bitter over three consecutive seasons with double-digit losses. Given the overhaul that has already been made to the front office, a reflection of the terrible roster Bowles had to work, it is evident New York’s problems weren’t on Bowles. Of course, Adam Gase’s two seasons with the Jets have highlighted that even more.

Since reuniting with Bruce Arians, serving as the Tampa Bay Buccaneers defensive coordinator, Bowles has proven his defensive acumen. He has been essential to the development of Tampa Bay’s young stars on the defensive side and helped turn this unit into a strong defense. If the Buccaneers go on a run to close the season and it carries over into the playoffs, Bowles will be a hot name on the coaching front.

NFL teams are looking for the next Sean McVay and Matt LaFleur; Joe Brady could be that guy. Plenty of organizations will have reservations about naming a 31-year-old as the head coach, especially with only one season of experience as an offensive coordinator. With that said, 2021 is the year to strike and hire this guy before it is too late.

Brady helped build the LSU Tigers’ record-breaking offense in 2019, leading to a national championship and Joe Burrow becoming the No. 1 overall pick. Hired  by Matt Rhule to serve as Carolinas offensive coordinator, the 31-year-old keeps proving he is brilliant. Despite missing Christian McCaffrey for most of the season, the Panthers are still averaging nearly 24 points and 360 total yards per game. If a team like the Houston Texans or Los Angeles Chargers are willing to take a risk, Brady could be a home-run hire.

Fitzgerald has been one of the most coveted NFL coaching candidates for years. The 46-year-old has turned Northwestern’s football program into something respectable, even finding a way to pull off multiple nine-win seasons. That seemed absurd for the Wildcats in previous years, but it shows how great a coach Fitzgerald is.

NFL teams, including the Green Bay Packers, have pursued him before and were rejected. Northwestern is his alma mater and his roots are tied to Illinois, with his family still being raised in Chicago. It would take the perfect situation for him to leave, but that might happen in 2021. If a certain head coach is fired, which is reportedly going to happen before the NFL season ends, the early work to convince Patricia to make the leap to the NFL might already be happening.

If you want to appreciate Hackett and the essential role he plays in Green Bay’s outstanding offense this season, ask Aaron Rodgers about his OC. Hackett likely hasn’t received as much recognition because he spent an extended stretch (2015-’18) with the Jacksonville Jaguars. Since joining the Packers, this offense has looked much more explosive.

Hackett is already drawing some interest in searches, but some might think it’s a little too early for him. While he is 40, older than some coaches on this list, many attribute the success of Green Bay’s offense to Matt LaFleur. It might take another year of Rodgers singing Hackett’s praises, or perhaps a Super Bowl title this year, before Hackett gets the appreciation he has earned.

The New York Giants are a playoff contender in 2020 and Graham is one of the biggest forces behind it. New York’s defensive coordinator has been incredible in his first season with the team, shaping this unit into one of the NFL’s best defenses. The 41-year-old came up under Bill Belichick (2009-15), before stints in New York (2016-’17) and Green Bay (2018). He served as the Miami Dolphins defensive coordinator in 2019, before following Joe Judge to the Giants. Beloved in the locker room and capable of getting the most out of his players, Graham is flying under the radar among NFL coaching candidates for 2021.

Harbaugh burned bridges with the San Francisco 49ers before bolting to Michigan. Hoping to turn the Wolverines back into a college football powerhouse, things haven’t gone as planned. While a 49-22 record might seem impressive, Michigan is 1-4 in bowl games and has failed to beat Ohio State since Harbaugh took over. Now that things are going south, with a miserable 2-4 season coming to an end, Harbaugh might return to the NFL.

While he set off a lot of people in San Francisco, Jim Harbaugh’s record was impressive. During his four-year stint, the 49ers went 44-19-1 with three seasons of 11-plus wins and one Super Bowl appearance. It was the best the franchise looked in years and Harbaugh proved he could coach at the highest level. With the 56-year-old eyeing a return and multiple teams interested, Harbaugh becomes one of the most popular NFL coaching candidates.

Smith started his NFL coaching career on the defensive side, working as a quality assistant for the Washington Football Team (2007-08). After a one-year stint at Ole Miss, he joined the Titans and slowly worked his way up the ladder. When Matt LaFleur departed to become the Green Bay Packers head coach, Smith took over as offensive coordinator.

Ever since, Tennessee’s offense has become one of the best in the NFL. The run-heavy approach is rare in this current era, but Smith makes it work with play designs and formations that put Derrick Henry in the perfect spots to break big runs. On top of that, Tennessee’s play-action attack is lethal, with Ryan Tannehill enjoying a career resurgence thanks to this 38-year-old offensive coordinator. Smith doesn’t generate as much buzz as Bieniemy or Daboll, but he deserves to be a head coach.

When the Cincinnati Bengals fired Marvin Lewis, it was fair to wonder if he would return to the NFL sidelines. After 16 seasons working for one of the NFL’s most dysfunctional franchises, it would be understandable if he was worn out.

Instead, his fire for the game remains. After leaving the NFL, he became a special advisor for the Arizona State Sun Devils. Working with Herm Edwards, Lewis was eventually promoted to co-defensive coordinator shortly after being interviewed to become the Dallas Cowboys head coach.

With another NFL hiring cycle beginning, Lewis is back on the radar. He is drawing interest from multiple teams, with many across the league carrying a tremendous amount of respect for his mind, approach and coaching record.

Some might point to Lewis’ 0-7 playoff record with the Cincinnati Bengals as a reason to avoid him. However, he posted a 131-122-3 record, including six double-digit win seasons, for an organization that frequently saw team owner Brown try and be the general manager.

If Lewis is given a second chance as an NFL head coach, he could thrive. Besides, Zac Taylor (4-24-1 in two seasons) has shown winning is difficult in Cincinnati.