The latest NFL coaching news suggests 31-year-old Carolina Panthers play-caller Joe Brady could be the next offensive genius to land a leading gig in 2021. 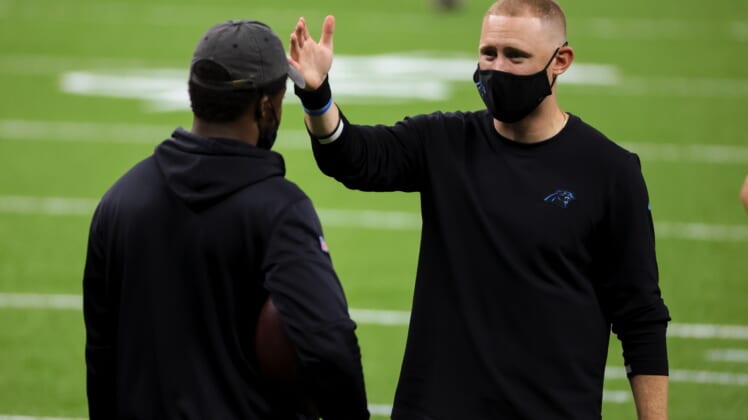 Brady is already fielding requests to speak with multiple teams about their lead job vacancies just after Black Monday.

Ian Rapoport of NFL Network provided the latest update on Brady’s talks with the Houston Texans from Tuesday:

As can be seen above, the Atlanta Falcons and Los Angeles Chargers will also speak with Brady to see if there’s a fit with either organization.

What a meteoric rise it’s been for Brady through the coaching ranks. He only turned 31 in September, yet it’s obvious NFL front offices and ownership already have immense respect for the dynamic play-caller.

Given his intriguing blend of coaching experience at the college and professional levels, and the fact he’s gotten so far so quickly, there’s plenty of reason to believe Brady is for real.

Several things stand out about Brady in terms of his outlook for becoming a head coach this soon. He served as an offensive assistant from 2017 to 2018 under one of the best in the business with the New Orleans Saints’ Sean Payton.

From there, Brady was the passing game coordinator and receivers coach at LSU for the 2019 campaign, which was historic as the Tigers went undefeated and won the national title.

Brady helped develop quarterback Joe Burrow into a No. 1 overall draft pick, and wideout Justin Jefferson was also a product of the LSU program who was historically productive as an NFL rookie this year.

After all that success in Baton Rouge, Brady found himself joining coach Matt Rhule’s staff with the Carolina Panthers for 2020 as the team’s offensive coordinator. The Panthers offense suffered from lackluster quarterback play by Teddy Bridgewater and an injury to superstar running back Christian McCaffrey, yet it’s obvious Brady did well with what he had based on the head coaching interest he’s generated for himself.

To quickly go over his potential list of destinations as it stands, the Chargers seem like the most logical fit. Struggling to find a fanbase in Los Angeles, adding a splashy hire like Brady to pair with a young stud quarterback in Justin Herbert would be the shot in the arm this Chargers franchise could really use.

After failing to get over the hump with old-school coach Anthony Lynn, Brady is the type of new-wave leader L.A. would love to have.

The Falcons are also interesting. Their organization is generally well-run, but field general Matt Ryan is nearing the end of his career, and the team is slated to pick No. 4 overall in the 2021 NFL Draft. Whether Brady is brought aboard to squeeze more out of Ryan or break in a rookie signal-caller, he’s as suited as any candidate on the market to get that done.

Considering Houston already has a star in Deshaun Watson under center and faces most of its problems on the defensive side of the ball, hiring Brady would be an exciting move, provided he could bring aboard a bright defensive coordinator to improve a Texans defense that ranked 30th in yards allowed.

Brady has shades of Los Angeles Rams coach Sean McVay, who was hired at the ripe age of 30. That gamble paid off in a big way for the Rams.

Let’s see if any of the three teams Brady speaks to offers him the gig, or if these talks are a precursor to more serious candidacy in 2022 and beyond.