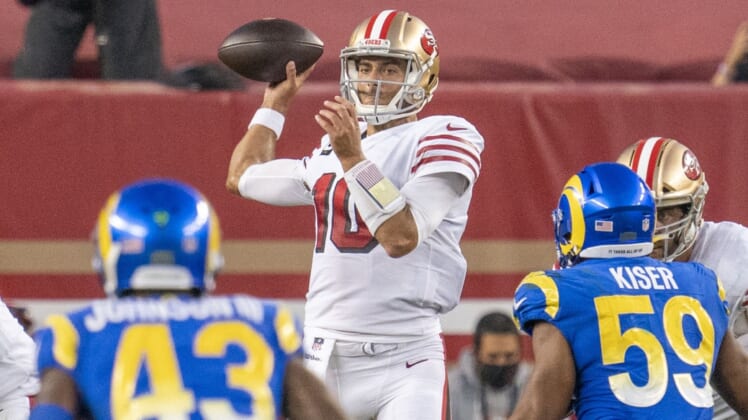 There’s been a ton of NFL rumors focusing on the San Francisco 49ers wanting to upgrade from Jimmy Garoppolo at quarterback. The team was in on Matthew Stafford prior to his trade from the Detroit Lions to the Los Angeles Rams. They are also considered one of the top potential landing spots for Deshaun Watson.

All the while, Garoppolo remains under contract after an injury-plagued 2020 campaign that saw him suit up for a mere six games due to numerous ankle ailments.

San Francisco’s brass has been clear with the media since the end of a disastrous 6-10 season. They fully expect Garoppolo to be back in 2021. General manager John Lynch repeated that claim on Tuesday.

“No. Not at all. I really believe that,” Lynch told Clark Judge and Ira Kaufman on The Eye Test for Two podcast when asked if there was any doubt a healthy Garoppolo would be the team’s Week 1 starter.

Lynch did expand on Garoppolo’s injury issues and the need to have better in-house options if he’s not able to go.

“Being available is a big part of this thing,” Lynch said. So we, probably as a stated goal, we have to insulate ourselves better. We got to have better options if he’s not there.”

Since Garoppolo joined the 49ers back in 2017, he boasts a 22-8 record as a starter. All other 49ers quarterbacks during that span are 7-27. The issue here is that Jimmy Garoppolo has missed a whopping 23 games to injury since the start of the 2018 season.

That’s troublesome, especially given who the 49ers had behind him last season. Impending free agents C.J. Beathard and Nick Mullens did absolutely nothing to lift San Francisco’s offense up in Garoppolo’s stead.

This topic was not necessarily broached too much. In reality, Lynch can’t talk about a player under contract on another team. 49ers rumors continue to persist that they will make a play for Watson. Nothing the team’s general manager said on Tuesday dispels that notion.

Of the realistic options, Lynch seemingly views Garoppolo better than others. Whether this means rumors of a Watson trade to the Bay Area dies down remains to be seen. It would take an absolutely massive haul for the 49ers — something that their current brass has pushed back against in previous trade talks for Odell Beckham Jr. and Khalil Mack.

Let’s assume for a second that Jimmy Garoppolo returns. Lynch made it more than clear that, at the very least, San Francisco will be looking for a veteran backup option. The team could also attempt to find training camp competition for Garoppolo.

“When he’s healthy,” Lynch said of Garoppolo, “he’s played at a high level. But we probably have to add someone. We probably need to improve ourselves, so if he’s not there we’re all right. We can win games.”

The 49ers did re-sign former Arizona Cardinals top-10 pick Josh Rosen earlier in the offseason after picking him up off the Tampa Bay Buccaneers’ practice squad. Entering his fourth NFL season, Rosen is seen as a major project. He’s not yet earned the right to be considered a top-end backup in the league.

It also stands to reason that the 49ers are going to move off both Beathard and Mullens. Even if they add a quarterback at some point in the 2021 NFL Draft, this area becomes a need once NFL free agency opens next month.

At issue here is a lack of cap room and the Jimmy Garoppolo contract. He’s set to count $26.41 million against the cap in 2021. Meanwhile, the 49ers are currently an estimated $14.26 million under the projected 2021 NFL salary cap.

They also have key free agents in Pro Bowlers Trent Williams, Kyle Juszczyk and Jason Verrett to re-sign. Those three are included in the more than 40 in-house players set to hit free agency next month.

San Francisco would be handcuffed big time if Jimmy Garoppolo were to return at his current cap figure for 2021. However, it also makes little sense for the 49ers to work out a contract restructure or extension.

Despite leading the 49ers to the Super Bowl in February of 2020, Garoppolo has not proven himself worthy of a longer-term commitment beyond next season. San Francisco’s interest in other quarterbacks adds another layer to this.

What does this mean? San Francisco is in a less-than-stellar position in that it must weigh the salary cap with finding a qualified veteran backup behind Jimmy Garoppolo should the team retain its current starter. Ryan Fitzpatrick, Andy Dalton, Jameis Winston and Mitchell Trubisky could all be cost-effective options.

On the trade market, New York Jets quarterback Sam Darnold could be an option. 49ers head coach Kyle Shanahan loved him coming out of USC back in 2018. That has not died down in the few years since. Darnold would also come relatively cheap this season with a projected $5 million cap hit should New York opt to trade him.

As for John Lynch’s comments, they could also be seen as him playing the PR game. It makes no sense for a general manager to publicly indicate his team is looking for an upgrade at quarterback when its current starter is under contract. It also wouldn’t do much in terms of trade talks with other teams about upgrading at this position.

Click below for more San Francisco 49ers news and rumors.