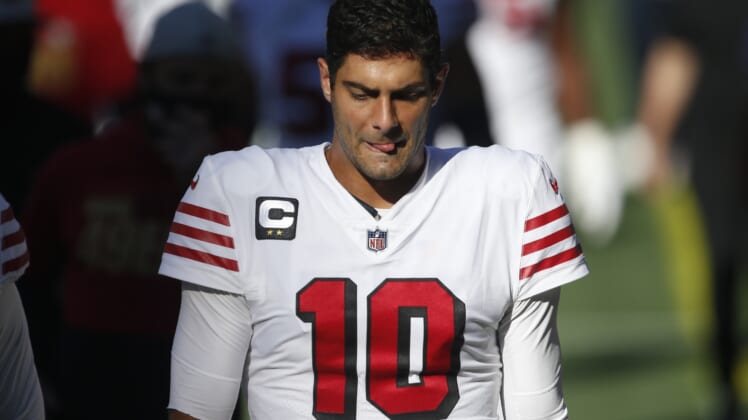 Since they finished up an ugly six-win 2020 season, San Francisco 49ers rumors have linked the team to quarterbacks. It has been noted multiple times that San Francisco wants to upgrade from Jimmy Garoppolo.

Among the names bandied about have been the likes of Sam Darnold and Carson Wentz. However, it remains to be seen if either is an upgrade over Garoppolo. The same thing can’t be said about disgruntled Houston Texans quarterback Deshaun Watson.

San Francisco has also been linked to Watson with suggestions that the team is one of his preferred destinations after the reigning NFL passing champion requested a trade from Houston. We now have some more information on this. It’s rather interesting stuff.

“I’m told San Fran is looking at potential upgrades, but they still like Jimmy G. He’s 24-9 as a starter, including the playoffs, with the Niners. They believe they can win with him, but it would take a big swing, like a Deshaun Watson effect here, to make that change.

And I’m told that the 49ers are one of the teams that Watson’s at least intrigued by,” ESPN’s Jeremy Fowler noted on Sunday (h/t Bleacher Report). “A source said, Which quarterback wouldn’t want to be in that offense on that team with all those weapons and Kyle Shanahan? So always a possibility, but the Texans have made clear they’re not willing to deal Watson right now. Garoppolo’s still a viable option for San Fran.”

This makes a ton of sense. Of those currently available, Watson is the only one seen as an obvious upgrade over Garoppolo. And while the Texans continue to push back against the idea he’s on the trade block, the star quarterback has made it clear he wants out of dodge. That includes the threat of a holdout next season.

It’s also important to note that Watson would like to join the 49ers. Playing under head coach Kyle Shanahan in an offense that includes George Kittle, Deebo Samuel and Brandon Aiyuk obviously has to be seen as appealing to the 25-year-old quarterback. Whether the 49ers offer up the three first-round picks and change it would take to acquire Watson remains to be seen.

49ers rumors will link them to quarterbacks this offseason

Fowler noted in his report that Jimmy Garoppolo is a viable option to be the 49ers’ Week 1 starter. This aligns with other reports suggesting the same thing.

It could very well be a case of the 49ers’ brass leaking this to the media as a way to up the ante in a Garoppolo trade. The veteran continues to be linked to his former New England Patriots team on a near never-ending loop.

Even if Garoppolo were brought back, San Francisco would have to find a veteran backup or someone to compete with him in training camp. Remember, he missed six games to injury last season and suffered a torn ACL three games into the 2018 campaign.

If the 49ers were to go that route, the likes of Jameis Winston, Mitchell Trubisky, Andy Dalton and Tyrod Taylor could make some sense for them.