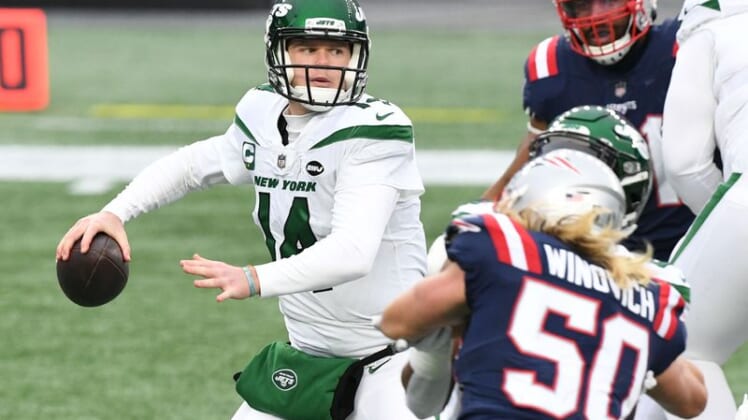 NFL rumors are flying around the league at a near never-ending clip on Super Bowl Sunday. The day started with reports suggesting that teams are calling up the New York Jets about quarterback Sam Darnold.

This makes sense given that New York boasts the second overall pick in the 2021 NFL Draft and will either trade that selection or Darnold.

We now have more information on this situation with a bit more on Jimmy Garoppolo’s status with the San Francisco 49ers courtesy of CBS Sports NFL insider Jason La Canfora.

During their Super Bowl pregame show on Sunday, CBS brought on La Canfora to talk about the current quarterback carousel around the NFL. He seemed to break some news, indicating that 49ers head coach Kyle Shanahan is high on Darnold. This suggests that San Francisco is one of the teams that has put in a call to the Jets’ brass about the former No. 3 pick.

San Francisco has been linked to numerous quarterbacks on the trade market. That included Matthew Stafford before he was traded from the Detroit Lions to the Los Angeles Rams late last month. They are one of the teams most bandied about when it comes to Houston Texans signal caller Deshaun Watson, too.

There’s certainly a lot of moving parts here. These 49ers would have to move on from Garoppolo in order to bring in someone of Darnold’s ilk. Whether the Jets’ quarterback can be seen as an upgrade over his more-veteran counterpart remains to be seen. What we do know is that Darnold is just 23 years old and existed under less-than-stellar circumstances in New York.

New England Patriots might be aiming for Jimmy Garoppolo reunion

In the same report, La Canfora noted that Patriots head coach Bill Belichick is interested in bringing Garoppolo back. Again, this can’t be seen as a major surprise.

Those close to the Patriots have indicated in the recent past that Garoppolo would be the ideal candidate as a stopgap quarterback in New England following Cam Newton’s disastrous one-year tenure with the team. Garoppolo knows Josh McDaniels’ offense like the back of his hand. Transitioning from Newton to a more prototypical quarterback with knowledge of the Patriots’ scheme makes sense.

Based on everything we’re hearing relating to the Patriots, they are going to be in the market for a veteran stopgap option at quarterback. They were not linked to Stafford ahead of his blockbuster trade and have not been linked too much to Deshaun Watson.

If the Patriots make a trade for Garoppolo, it would then free San Francisco up to add Darnold to the mix. This would be the latest example of an early NFL offseason dominated by quarterback talk.