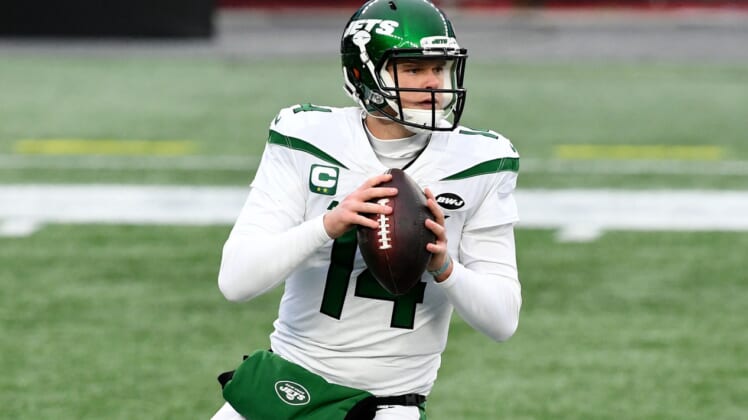 New York Jets quarterback Sam Darnold could reportedly join the growing list of top passers on the move this offseason in a wild quarterback carousel. With New York holding the No. 2 overall pick in the 2021 NFL Draft, a prime spot to take a franchise signal-caller, Darnold is starting to generate interest across the league.

The Jets kicked off their preparation for the 2021 season by firing Adam Gase and hiring Robert Saleh as their head coach. The move checked off the first item on the club’s offseason to-do list, but the future at quarterback remained uncertain. Now, as Saleh and general manager Joe Douglas weigh the team’s options, interest in Darnold seems to be picking up.

ESPN’s Adam Schefter reported Sunday that multiple teams have reached out to the Jets regarding their interest in trading for Darnold. New York has an open mind, receptive to offers and initial discussions, but haven’t made a firm commitment about their 2021 plans at quarterback.

When Saleh first took over as head coach, there was initial buzz that he liked Darnold. Furthermore, both he and offensive coordinator Mike LaFleur believed that the former No. 3 overall pick could be salvaged. But, when asked about Darnold’s future a few weeks ago, Saleh refused to commit to the 23-year-old quarterback.

Darnold hasn’t lived up to the hype he had when New York picked him in the 2018 NFL Draft. He completed a career-low 59.6% of his pass attempts and had a woeful 9-11 TD-INT ratio this past season. The Jets hired Gase in 2019, hoping that he would get the most out of the young quarterback. But Darnold’s worst performances came in the Gase era, resulting in a 9-16 record, 79.1 quarterback rating and 28-24 TD-INT ratio across 25 starts in the past two seasons.

A new coaching staff and a quarterback-friendly scheme could help Darnold turn things around, but the Jets are also in a difficult spot. He is entering the fourth year of his contract, with a fifth-year option available for the 2022 season. Picking up that team option would mean a huge financial commitment to a player who hasn’t exactly earned a raise.

Darnold could be an intriguing fit for teams like the San Francisco 49ers, Pittsburgh Steelers and Indianapolis Colts. However, the best-case scenario for New York is likely a 2021 second-round pick in return. In that scenario, the Jets could either take Zach Wilson or Justin Fields with the No. 2 overall pick From there, the rest of the team’s draft picks and cap space can be devoted to building a team around the rookie quarterback.

For now, Sam Darnold will likely remain with the Jets. In the meantime, another star quarterback could be moved in the coming days. Once that domino falls, NFL teams who missed out will shift their attention to Darnold and Deshaun Watson.