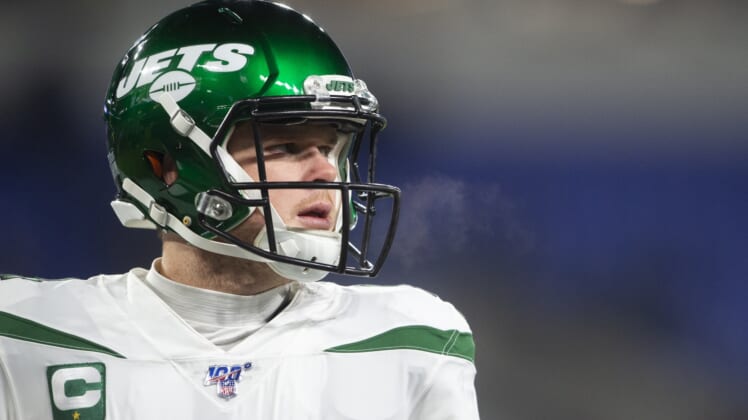 New York Jets rumors are taking over the NFL world Thursday evening. Fresh off the downtrodden organization announcing that it has hired San Francisco 49ers defensive coordinator Robert Saleh to be its next head coach, we’re hearing a bit more from a player personnel standpoint.

A lot of the talk in Jersey following an ugly two-win season under recently-fired head coach Adam Gase has been about the future of quarterback Sam Darnold. While Saleh himself is a defensive-minded head coach, he’s apparently in lockstep with general manager Joe Douglas regarding Darnold and the Jets’ quarterback position.

Selecting No. 2 overall in the 2021 NFL Draft, Jets rumors have indicated that they might look to add either Zach Wilson (BYU) or Justin Fields (Ohio State). If this note from Schefter is correct, it will have a major trickle-down effect come draft time.

It was previously noted that the Jets are looking to pull off a blockbuster trade surrounding the quarterback position during the offseason. Said report indicated that New York would either move off Darnold after just three seasons or trade down from the second selection with a quarterback-needy team.

If the Jets are indeed sold on Darnold for next season, it makes perfect sense for them to start taking offers for the second selection with Trevor Lawrence almost guaranteed to go No. 1 overall to Urban Meyer and the Jacksonville Jaguars.

Are these Jets rumors nothing more than smoke?

There’s an argument that New York is putting this out there in order to either entice teams into a Sam Darnold trade or acquire feelers about the No. 2 pick. It’s all about the PR game in the modern NFL.

With that said, it stands to reason that Robert Saleh and Joe Douglas would have had widespread discussions about Darnold. It’s only the most-important position on the football field.

The simple fact that Saleh is also bringing 49ers passing-game coordinator Mike LaFleur with him to Jersey adds a whole other layer to this. LaFleur worked with a similar type of quarterback as Darnold in that of Jimmy Garoppolo with San Francisco.

We won’t know one way or another for some time what the Jets plan to do at quarterback unless they trade the No. 2 pick in short order.

What we do know is that New York needs more from this position moving forward. Throughout the course of his three-year career, Darnold has posted a 13-25 record as a starter with 45 touchdowns against 39 interceptions.

For now, speculation will ramp up as it relates to the Jets’ quarterback situation. However, Schefter was pretty darn clear in his report. Saleh and Douglas are apparently sold on him for at least the 2021 season. Things could obviously change on this front moving forward.