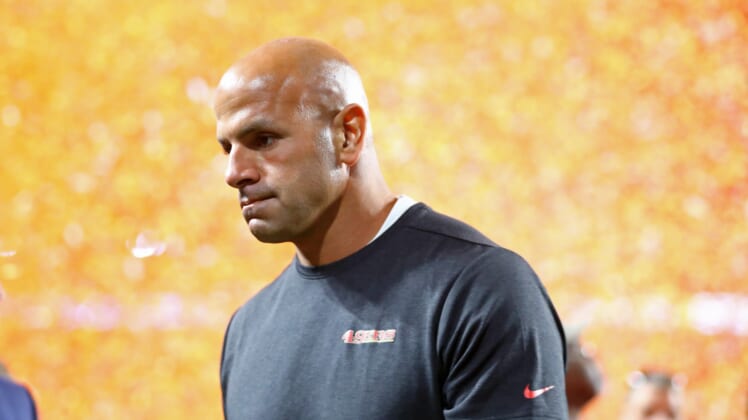 The New York Jets search for a new head coach to replace the recently-fired Adam Gase has come to a conclusion after less than two weeks.

San Francisco 49ers defensive coordinator Robert Saleh has been the leader in the clubhouse for the position. This has now come to fruition.

NFL insider Josina Anderson was the first to report that the Jets are set to hire Saleh as their 19th head coach in franchise history. The Jets would confirm that report a short while later.

Pretty much the hottest head coach candidate of this cycle, Saleh had drawn interest from five teams. For good reason. He’s seen as an up-and-comer and a genius on the defensive side of the ball.

Despite the plethora of injuries San Francisco dealt with on defense this past season, he was still able to lead a top-five defense. That came after this unit ranked No. 2 overall during a Super Bowl run back in 2019.

Saleh’s previous experience includes working as an assistant with the Texans, Seahawks and Jaguars. When he joined the 49ers back in 2017, Saleh became the first Arab-American coordinator in NFL history.

Now that the Jets have hired Robert Saleh, the question becomes who he might bring in to run their offense. ESPN’s Adam Schefter is reporting that 49ers passing-game coordinator Mike LaFleur is the choice.

There was always a good chance that one (or both) would move on to become a play-caller this offseason. What better fit than with Saleh in Jersey?

For Saleh, the hard work now starts. Without any head coach experience, he needs to build a strong staff. That was one of the issues Adam Gase had during his disastrous two-year stint as the Jets’ head coach. Given Saleh’s lack of experience, this becomes the primary objective.

From there, Saleh will work with general manager Joe Douglas to build a plan for the offseason. Selecting No. 2 overall in the 2021 NFL Draft, that could potentially include replacing Sam Darnold at quarterback.

For now, the New York Jets have found their man. Robert Saleh might have a lot of work to do, but he’s proven to be more than up to the task over the past four seasons.