Could Robert Saleh become the new coach of the New York Jets in 2021? The latest news suggests he's one of the finalists for the job. 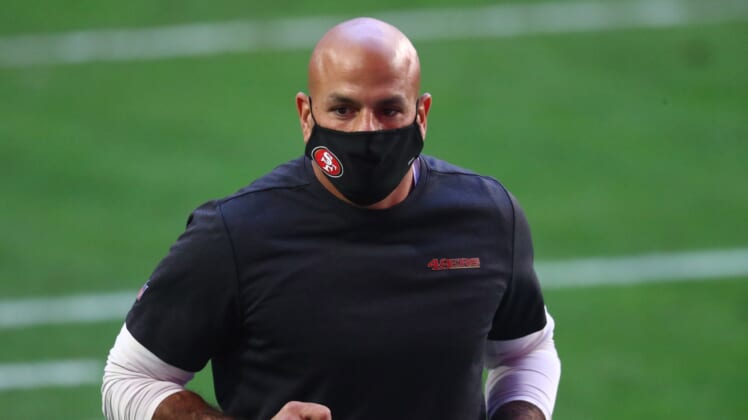 The New York Jets are closing in on a decision for their head coaching vacancy, as San Francisco 49ers defensive coordinator Robert Saleh is surfacing as the first finalist to fill the position.

Saleh helped the 49ers to a Super Bowl appearance last season, and his unit performed admirably amid a slew of injuries in 2020. That’s evidently caught the Jets’ attention, and soon Saleh will speak with the club again.

According to NFL Network’s Ian Rapoport and Mike Garafolo, Saleh is scheduled to soar back to the Big Apple for a follow-up discussion with the Jets’ brass:

Considered one of the hottest candidates on the head coaching market, Saleh is garnering interest for other vacancies around the league. If New York really wants him, the team will likely have to move quickly before Saleh is scooped up by another franchise.

Given his local ties to the Detroit area, it’s possible Saleh holds out from any other team until his standing with the Lions becomes clearer. On the other hand, if the Jets make him an offer after Tuesday’s second interview, perhaps it’ll be too good for him to pass up.

Why New York Jets are getting serious with Robert Saleh

Saleh lost DeForest Buckner to a trade with the Indianapolis Colts, saw Nick Bosa go down with an ACL tear early in the 2020 campaign and was without Dee Ford for much of the season. Star cornerback Richard Sherman also missed extended time. Not exactly ideal circumstances, as much of San Francisco’s dynamic, deep defensive front was gone and its most trusted veteran on the back end missed extended time, appearing in just five games.

Given how much help the Jets need on the defensive side of the ball, and the fact that they just failed with an alleged offensive genius in Adam Gase at the helm, it’d make sense to pivot the other way and hire someone like Saleh this time around.

Having said that, don’t be surprised if New York winds up going a different way. Saleh seems to have the type of competitive fire and schematic acumen to turn the Jets around, yet they also fell short of expectations under current Tampa Bay Buccaneers defensive coordinator Todd Bowles when he had a shot at the gig before Gase.

It’s more of a cultural shift that needs to happen with the Jets. Whomever general manager Joe Douglas and Co. hire, be it Saleh or another candidate, it’s key that the front office and head coach are in lockstep.

If Saleh does come aboard, he’ll need a top-flight offensive coordinator to either salvage Sam Darnold’s career, or rapidly develop a potential new quarterback Douglas could select No. 2 overall in the 2021 NFL Draft.