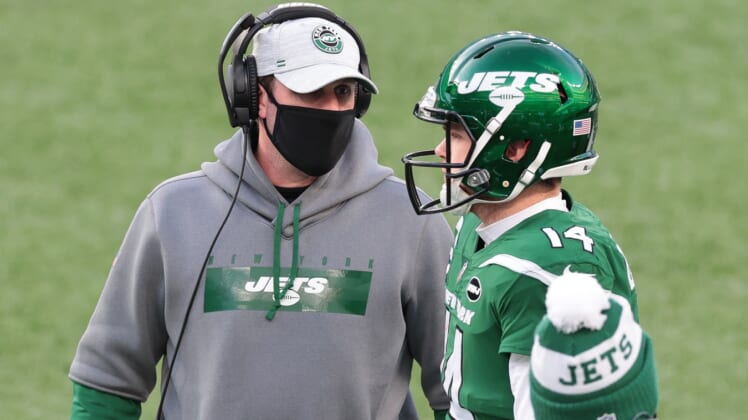 The inevitable has indeed come to fruition. NFL news coming out of New Jersey for the better part of the past calendar year has focused on the possibility that the New York Jets will fire embattled head coach Adam Gase.

“This evening, I informed Adam Gase he will no longer serve as the Head Coach of the Jets. During his time here, I had the pleasure to get to know Adam and his wonderful family and wish them nothing but the best moving forward,” Jets CEO and Chairman Christopher Johnson said, via the team’s official website.  “While my sincere intentions are to have stability in our organization – especially in our leadership positions – it is clear the best decision for the Jets is to move in a different direction.”

This can’t be considered anywhere near a surprise. The Jets started this season with a 0-13 record before consecutive wins against the Rams and Browns. Even then, there was very little reason to believe that Adam Gase would keep his job with the Jets.

Hired by the Jets ahead of the 2019 season, Gase finishes his tenure in Jersey with a 9-23 record. That came after major struggles in the same role with the division-rival Miami Dolphins from 2016-18. When the Jets hired Gase in the first place, they received a lot of push back from those around the NFL world.

NFL news in New Jersey has not been kind to Gase since he took the job. He got into a not-so-private spat with All-Pro safety Jamal Adams prior to him being traded ahead of the 2020 season. Issues with Le’Veon Bell also came to the forefront prior to the running back being released earlier in the 2020 season.

As for the Jets, there’s going to be a lot of talk about a potential replacement. More than anything, that will likely depend on what general manager Joe Douglas does at the quarterback position.

NFL news earlier on Sunday indicated that the Jets were going to look to pull off a blockbuster trade this coming offseason. That could include moving on from former No. 3 overall pick Sam Darnold and replacing him with a rookie quarterback with the second selection in the 2021 NFL Draft. There’s also a chance New York opts to trade said pick in order to build up one of the least-talented rosters in the league.

Whether the Jets go with an offensive-minded head coach remains to be seen. However, that seems to be the likeliest scenario right now. Simply put, they need someone to help build up the quarterback room. It’s something we did not see with Gase during his two-year run with the organization.

Gase and the Jets finished this season with a 3-13 record and being outscored by nearly two touchdowns per game. For all of his faults, that’s not all on the now-unemployed head coach. These Jets have a long way to go before they are relevant on the broader NFL stage. That will star with their new head coach.