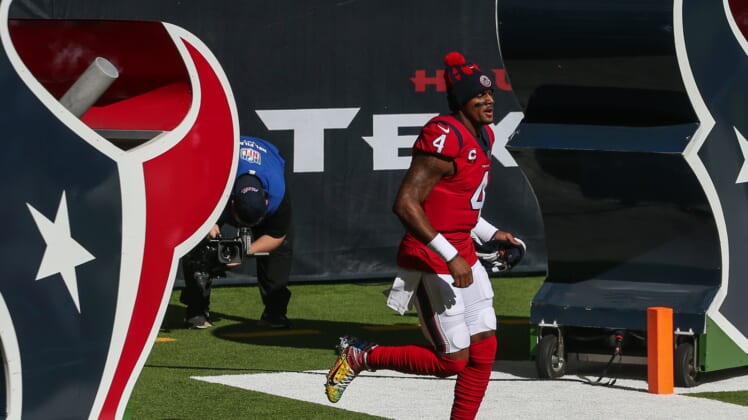 The Houston Texans are doing their best to push away teams pursuing a Deshaun Watson trade and the organization seems to be just as effective at creating even more issues with Watson. In the weeks since the 25-year-old requested a trade, recent moves could be causing an even greater divide between Watson and the organization.

Fractures in the relationship between Watson and the Texans’ organization started showing early in the offseason. Since that time, as the team’s hiring process has unfolded, frustration has turned into an outright trade demand and a willingness to never play for Houston again. While the Texans have publicly stated their desire to repair the damage, personnel decisions in recent days might have made things even worse.

According to ESPN’s Adam Schefter, the Texans remain insistent to rival clubs that they won’t trade Watson. Houston’s phone keeps ringing with other teams hoping the standoff leads to a blockbuster deal, but there is no resolution in sight. Meanwhile, recent hires by the organization have reportedly created an even bigger rift between the locker room and ownership.

Before the offseason began, Texans owner Cal McNair told Watson that he would have input on the team’s search for a general manager and head coach. After his proposed candidates for interviews didn’t receive opportunities, Watson became frustrated by the organization’s deception. When McNair and executive Jack Easterby hired Nick Caserio as general manager, going against the search firm’s advice, Watson learned of the news on social media.

Houston’s star quarterback also suggested the Texans interview Eric Bieniemy and Robert Saleh for the head coach. Saleh never received an interview request and the team didn’t approach Bieniemy until it was too late. By then, Watson’s anger with the organization boiled over. He stopped communicating with team executives and made it clear that David Culley’s hiring wouldn’t change things. His issues are entirely with McNair and Easterby, but recent moves made things worse.

According to Schefter, the Texans recently made more sweeping changes inside the organization. Within the past week, they fired director of football administration Kevin Krajcovic, equipment manager Mike Parson, team employee Doug West and Parson’s staff. The decision to fire Parson is especially noteworthy, given he reportedly has a close relationship with Watson and the entire locker room.

Keep in mind, things between Texans’ ownership and the locker room were already in a rough spot. Veterans reportedly encouraged Watson to demand a trade and support J.J. Watt moving on from the team. Terminating one of the few staff members in the building who the locker room trusted, would seemingly create more issues.

Many are concerned about the influence Easterby, who fired Bill O’Brien and orchestrated the DeAndre Hopkins trade, has on the organization. One player suggested to ESPN that the Texans are weeding out employees who aren’t loyal to Easterby, replacing them with people who will be indebted to McNair, Caserio and Easterby.

If the Texans are attempting to repair their relationship with Watson and his teammates, they seem to be doing a poor job at it. Watson can sit out, but that would cost him a staggering sum and he would even owe money to the organization. For now, despite his desire to get away, the Texans seem determined to keep him.