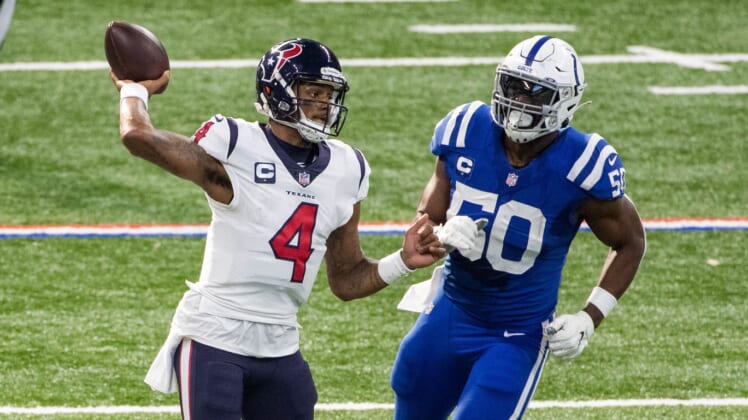 Houston Texans quarterback Deshaun Watson wants a trade just as badly as the team wants to keep him. While both sides are sticking to their guns, another issue could prevent a blockbuster trade that might make NFL history.

The tension between Watson and the Texans heated up early this offseason. Initially promised by team owner Cal McNair that he would have input on the search for a new general manager and head coach, Watson instead heard of the Nick Caserio hiring on social media.

After reportedly having his prospective candidates ignored, hardly even receiving legitimate interviews, Watson became extremely unhappy with the Texans’ organization. The fractured relationship only worsened as time went on, leading to a trade demand.

After the Houston Texans hired David Culley as head coach, the organization publicly stated its desire to keep Watson. While the team hoped hiring Culley would help salvage the partnership with the quarterback, it didn’t make a difference to Watson.

Teams have kept calling Caserio, trying to convince the new general manager to make a big move. But this early in the offseason, the Texans aren’t even willing to negotiate. Even if they were, another factor might drive quarterback-needy teams away.

According to Pro Football Network’s Tony Pauline, many around the league believe a Deshaun Watson trade isn’t a foregone conclusion. Houston remains insistent on trying to repair the relationship. Even if they become open to discussions with other clubs, the asking price is believed to be too high.

At least one NFL general manager has already suggested the asking price puts them out of the running for Watson. It’s possible others in the league share that sentiment.

Watson is reportedly willing to never suit up for the Texans again, a decision that would cost him tens of millions of dollars. If he’s willing to go that far, making a financial sacrifice to free himself from Houston’s organizational chaos, the Texans may have no choice but to trade him.