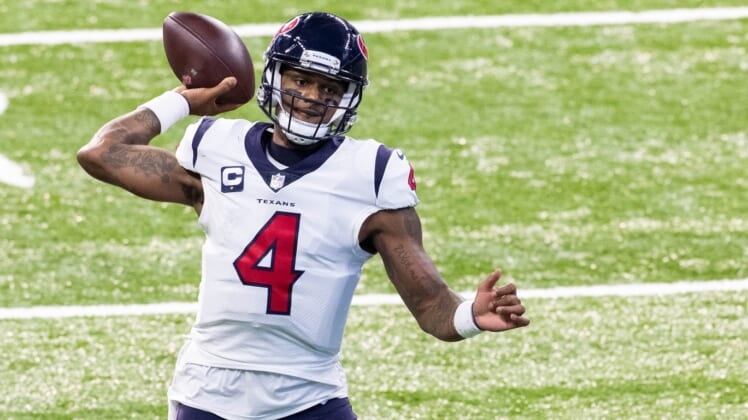 Houston Texans star Deshaun Watson wants out, following years of organizational dysfunction and increasing distrust with the club. While the Texans are seemingly doing everything they can to salvage the relationship, the damage may already be done.

Team owner Cal McNair promised Watson this offseason that he could have input on the search for a general manager and head coach. Just a few weeks after recommending potential candidates for interviews, with Watson factoring in the impact on the entire locker room, he learned of Nick Caserio’s hiring on social media.

Even as the Texans start moving closer to hiring a head coach, it seems decisions made by the organization and recent weeks may have left this relationship beyond repair. As a result, a blockbuster trade looks even more likely.

Deshaun Watson wants out of Houston regardless of next head coach

Before the offseason kicked off, Watson suggested the Texans interview Kansas City Chiefs offensive coordinator Eric Bieniemy and San Francisco 49ers defensive coordinator Robert Saleh. They were the top candidates atop many coaching lists, but the Texans reportedly ignored the suggestions.

Instead, Cal McNair focused on hiring a general manager. But when the search firm hired to find Houston’s top football executive recommended two candidates the owner didn’t like, he and interim general manager Jack Easterby privately met with Caserio and hired him.

To make matters worse, the Texans were the only team with a head-coaching vacancy not to even request an interview with Bieniemy. Immediately after, with the New York Jets hiring Saleh, word of Watson’s growing frustrations with the organization first broke.

McNair and Caserio have publicly tried to repair the relationship, finally interviewing Bieniemy this past week. He is now among the finalists to become Houston’s head coach, but it may no longer matter who they hire.

According to ESPN’s Chris Mortensen, Deshaun Watson wants out of Houston regardless of who the team hires as its head coach.

“They will have to make a hail mary plea to Deshaun Watson, the team’s franchise quarterback, who still wants out of Houston,” Chris Mortensen reported on Postseason NFL Countdown. “He, right now, is of the mindset that this isn’t about who the next head coach is going to be, this is about ownership and what they have done and broken a trust.”

The Texans certainly hoped they could convince the face of their franchise to stay. But the 25-year-old is clearly at a point where he doesn’t trust the organization to make the right decisions now or in the future. Considering what is in his best interests for the rest of his NFL career, Watson seems prepared to never play for Houston again.

Rival teams have started making calls to Caserio. While the Texans haven’t been receptive to talking potential trades, that could start to change in the coming months. If Watson truly wants out and demands a trade, Houston’s asking price to trade him will be historic.

Watson is coming off the best season in his career, finishing with a league-leading 4,823 passing yards and the second-highest quarterback rating (112.4). He will attract the interest of nearly half the league, but he does seem to have a preferred landing spot.

The writing seems to be on the wall for the Houston Texans. At this point, trading Deshaun Watson might be beneficial for all sides. Once Super Bowl LV is over, this will be the biggest story of the NFL offseason.